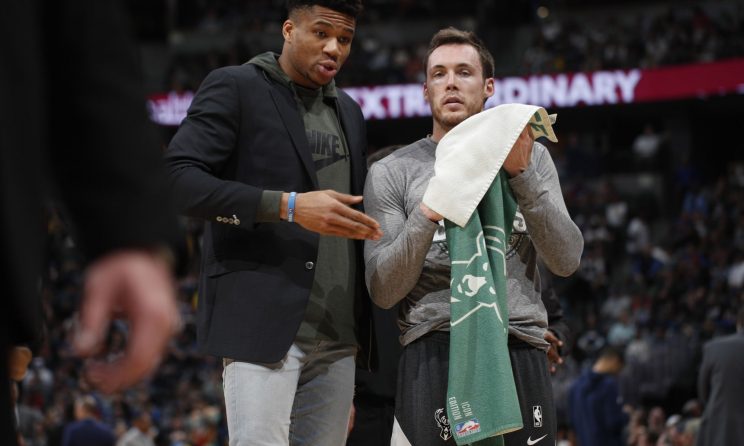 Giannis Antetokounmpo had a special birthday gift awaiting him from his teammates after the Milwaukee Bucks first practice of the 2020-21 training camp on Sunday.

A set of pens.

Yes, Khris Middleton and Pat Connaughton gave the back-to-back league MVP who will make $27 million this season pens. It’s a not-so-subtle jab for the Defensive Player of the Year to sign his five-year super-max extension to stay in Milwaukee

“We definitely sung a ‘Happy Birthday’ after practice. Me and PC thought the perfect gift to him from our teammates is just to give him a pen,” Middleton said, via ESPN. “So there were pens in his locker for his birthday present. I told him those should be some of the best birthday gifts he’s ever gotten, so hopefully he enjoys it and uses it.”

Antetokounmpo turned 26 on Sunday and has until Dec. 21 to sign the extension. He is slated to become an unrestricted free agent after the season ends. He could sign the same deal with the Bucks next summer.

The star has said he wants to stay with the Bucks, but if he actually does appears to fall in part on the Bucks building a contender around him. He told Swedish newspaper Aftonbladet a few months ago:

It’s easy, I want to be a winner. I do not care about the money. My family is fine and I can take care of my children and grandchildren so that’s not the most important thing right now, it’s winning. As long as we can win and create a winning culture, it will be good.

When asked point blank if he would be with the Bucks next year, he said he didn’t know what the plan is and it “depends on the decisions they make.”

Milwaukee brought on Jrue Holiday in the offseason and had everyone on the roster report to practice on Sunday.