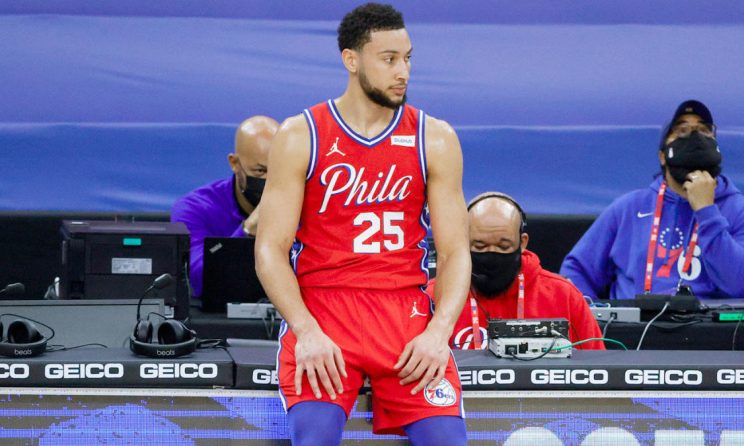 Ben Simmons, claiming via his super agent Rich Paul that he was prepared to sit out the entire season unless the Philadelphia 76ers trade him — with a “source close to Simmons” telling ESPN that the unhappy star guard was committed to his Philly strike “for the long haul” — was always a front, and a pretty weak one at that.


On Oct. 1, the Sixers put $8.25 million of the $33M Simmons is due to make for the 2021-22 season into an escrow account, and from that account they are deducting, per ESPN, roughly $360,000 for every game, preseason or regular season, that Simmons misses.


So far he has missed two games. When he misses Monday’s game against the Nets, he will be out a million bucks. And what do you know: On Monday a report broke, via ESPN’s Adrian Wojnarowski, that “discussions have gained momentum on Simmons returning to the Sixers, likely as soon as this week.”


No chance this holdout was going to go on for “the long haul.”


And so, absent a near-term trade, Simmons will be back with the Sixers in relatively short order. He’ll be there only in body, mind you. He will not be there in spirit. Which is to say, he will not be getting anything out of being at a few practices, or even going through the motions of a couple preseason games.


But if you think about it, that isn’t really that big a change for Simmons. For all intents and purposes, practice has always been sort of a no-show deal for him. In four seasons — five if you count the entire first year he sat out but still had the opportunity to work on his craft — he hasn’t progressed one iota as an offensive player. One could argue he’s regressed. Practice, apparently, does nothing for him.


It does, of course, do something for the team, which at present is less than two weeks from opening its season with no idea whether its second-best player will be on the floor, and if he is, whether he’ll actually be trying. You know, just a minor distraction for a team and organization trying to win a championship.


But Simmons isn’t worried about screwing up the organization, because in his mind, the organization — which has had the audacity to ask Simmons, whom it signed to a $170 million extension, to figure out a way to co-exist alongside one of the 10 best players in the world — is what did him wrong in the first place.


Indeed, if we know anything about Simmons, it’s that he’s entitled. Like a pushover parent, the Sixers do have to accept their share of the blame for creating this problem child; from the top down, they have spoiled him at every turn. The question is: Will Simmons ever shoulder his share of the responsibility?


The nerve of this guy to even try to suggest the Sixers, even to their own obvious detriment, haven’t rolled out the red carpet for him. They have allowed him to control the offense despite his lacking a great majority of the half-court skills required to, you know, control an offense. They have asked Embiid, the best low-post player in the world, to station himself away from the basket to allow Simmons his precious open paint, where he’s scared to shoot anyway.


The Sixers watched Jimmy Butler walk to Miami in large part because, if you can read the tea leaves, he didn’t want to play with Simmons, who is not only a flawed player but also one who has exhibited pretty much zero characteristics of being a winner. He doesn’t get better in the offseason. He doesn’t adapt his role to the needs of the team.


Every time the Sixers have run up against elite playoff competition, Simmons has been more liability than asset. Early in his career he had to be benched for T.J. McConnell in fourth quarters of postseason games. The irony of paying a guy $170 million that you can’t afford to play in big situations is supremely rich.


The one thing that Simmons is right about is that he and Embiid do not fit together. They never have. The Sixers have been trying to jam a round peg in a square hole from the start. But Simmons knew that when he signed that $170 million extension, too. He didn’t mind taking the money. Honoring the contract is apparently a different story.


And let’s be clear about why Simmons and Embiid don’t fit: Simmons doesn’t shoot. He isn’t a threat to run pick-and-roll. In the half court, he’s the extra kid you don’t have room in the car for but you have to squeeze him in anyway. This isn’t an Embiid problem. It’s a Simmons problem.


Individually speaking, they would be better off apart. Simmons knows this. But when he became aware that he was a candidate to be traded for James Harden, he was offended. Grow up. There are maybe 10 players in the world who have the right to be offended by being floated in a trade offer for James Harden, and Simmons isn’t even close to one of them. He wants to be traded, but only if he’s the one calling the shots. His ego can’t handle the other way around.


And, boy, is his ego taking a beating now. Not only does he know that the Sixers want to be rid of him, but also that nobody else wants him badly enough to give the Sixers a decent package in return. Because the secret is out. The idea of Ben Simmons as a superstar has been replaced by the reality of his inconsistent excellence and circumstantial potential.


Which begs the question: What, exactly, are the circumstances that would bring out the best in Ben Simmons? People love to say it’s something similar to what Milwaukee has done with Giannis Antetokounmpo: a floor-stretching center. Shooters everywhere. Second options that can initiate like first options.


But Simmons isn’t even close to the finisher that Antetokounmpo is. He hasn’t developed even one percent of the face-up midrange jumper that Antetokounmpo has turned into a borderline weapon. Antetokounmpo is an almost inhuman force when he gets going downhill, a relentless offensive rebounder, an undaunted free-throw shooter, and still he needed to reinvent himself as a largely off-ball player to reach his — and his team’s — full potential this past postseason. He screened like crazy. He rolled with purpose. He cut hard. He killed on the boards. Simmons has never been willing to consistently do any of that. He sees it as a demotion.


Ultimately, Simmons can seek a Giannis role all he wants, but he’s not going to have the same kind of success. He’s just not that great. Plain and simple. Leaving the massive offensive gap out, you can try to point to their similarities as roaming, free-safety type defenders, but I’m going to tell you this straight up: Even Simmons’ defense, the lone unimpeachable aspect of his game, is Embiid dependent to a degree.


Don’t twist that as me saying he’s not an elite defender. He is. But he is not a lock-down defender. He gets beaten more than you’d think. He’s not going to do what Jrue Holiday did in single-handedly turning an entire postseason on its head with his defense. His reputation as a great defender has exploded because of his versatility, which surely has immense value. He’s positionally long and makes multiple efforts and he tracks from behind plays as effectively as anyone. But he’s more decathlete than world-class at any one thing. If you think the Sixers are an elite defense more because of Simmons than Embiid, to whom everything funnels, I’ve got some other things to sell you.


If Simmons had an ounce of humility, he would be thankful he has Embiid. Instead, he wants rid of him. He would be thankful that Doc Rivers, almost to the point of looking silly himself, defended him every time reporters had the nerve to question the challenge Simmons presents as an offensive tentpole throughout the 2020-21 season, literally laughing at those asking the very reasonable questions as if they were somehow blind to all the wonderful things Simmons does on a basketball court.


Nobody’s blind. Anyone with half an eye for basketball can see what Simmons does. Just as everyone can see what he doesn’t do. And it can’t be ignored anymore. The heat is turning up. You know that old saying, when the going gets tough, the tough get going? Well, things have gotten tough in Philly, and the only place that Simmons wants to get going is out of town.


He has plainly stated that he would rather be on a bad team that is built around him than a good one that isn’t. And you wonder why people don’t view Simmons as a winner. He’s on a championship contender and he wants out so he can be better positioned to look like a star. He wants to go someplace where the fans don’t care as much as Philly fans so he can avoid all those pesky expectations. He literally came out and said the Sixers being a good team early in his career was a bad thing, apparently because it didn’t allow for the leeway other top picks get to develop their games under the cover of irrelevance. Tough break. You really have to feel for the guy.


It is here that I will point out Simmons’ age. He’s 25. Not 19. He’s certainly still young, and his maturation in terms of holding himself accountable has likely been stunted by his being coddled as a phenom athlete for the majority of his life. There’s still time to grow up. But he’s 25. He is an adult. Quit making excuses and look in the mirror.


At some point, Simmons is going to end up on another team — and he is going to arrive with the well-earned reputation of being a baby. He doesn’t just get a clean start, not with his new teammates, who can say all the right things in interviews but will quietly be sizing him up the minute he walks in the way he has run from this situation in Philly is going to precede him.


If you want to be the man on an NBA team, it’s not just about your game. It’s about how you handle yourself. It’s about being the guy willing to take the heat. Right now, Simmons looks scared on and off the court. Professional athletes do not respect that. There was a time when Simmons’ NBA peers spoke in awe of his unique size, skill and talent. But the secret is out. The total is less than the sum of the parts.


At a certain point, potential gives way to reality, and the reality is this: If Simmons expects to eventually establish himself as the worthy leader of a team, let alone a good-to-great team, as someone teammates will look to in tough times and know he’s in the foxhole with them, he better get back to training camp sooner rather than later. Not for the money. Because it’s the right thing to do. And frankly, because his game needs the work.