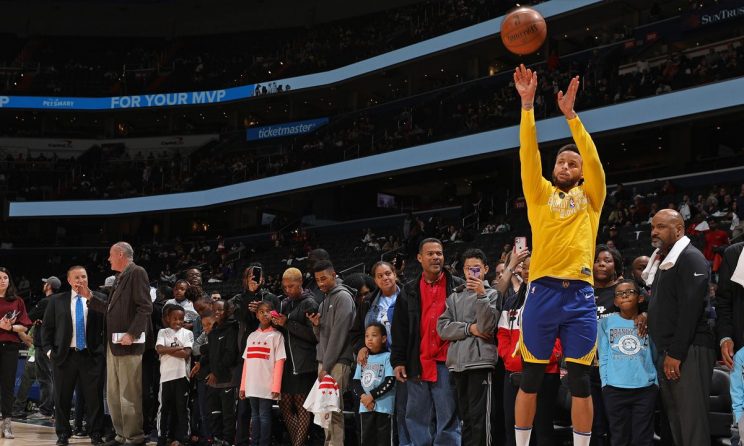 Steph Curry always has had lofty goals for his NBA career. You don’t change the game without having your sights set on the horizon.

As the Warriors superstar prepares for his Age 32 campaign, he is starting to turn his gaze to a new target: Matching his father Dell by playing 16 NBA seasons.

“That was always the goal,” Curry said Monday on a Zoom call with reporters. “Now it’s just more so listen to your body. Who knows. You can’t predict the future. I’ve always said I want to play as long as I can play at the level I want to be at and hopefully, you can be in that position where you end it on your own terms. Whatever that means, hopefully, that is closer to 40.”

Curry is entering his 12th NBA season and told coach Steve Kerr he felt “amazing” after his first day of training camp. The two-time NBA MVP admitted Monday that he and the Warriors have discussed a contract extension as he hopes to take the Kobe Bryant-Tim Duncan path and play his entire career for the same franchise.

“Wearing the same jersey for as long as I can, that’s a huge goal, for sure. It’s an elite club of guys that you look at that have played with the same organization and been successful and achieved greatness in that respect,” Curry said.

“That would be an awesome accomplishment, something I’ve obviously spoken publicly about and very committed to. But that also goes with there’s a lot more to be accomplished on the court and again I can’t fast forward to what the end is going to be. Enjoy the moment, enjoy the challenges that we have in front of us and what I have left to accomplish as a player.”

RELATED: Why Steph finishing career with Warriors means so much to him

After playing in just five games last season while the Warriors sunk to the bottom of the NBA, Curry is thrilled to be back on the court preparing to play in a competitive game. Despite the devastating loss of Klay Thompson to an Achilles tear, Curry still believes the Warriors have more than enough talent to surprise people and be a threat in the title picture.

The Warriors spent last season resting and recalibrating as they look to extend their dynasty into the 2020s. Curry and the Warriors should have a good sense of where they stand among the contenders early in the season as their first-half schedule is loaded with games against the NBA’s best.

While Curry hopes to be splashing long-distance jumpers at age 40, his wife, Ayesha Curry, isn’t as thrilled about the idea.

“I have a floating target on that, for sure. Any time I say I want to play up to 40 she’ll definitely give me a little look,” Curry said.

The NBA felt different last season with Curry spending the majority of it in a suit on the sidelines. Unfortunately for the rest of the NBA, the best shooter in league history has plans to play for quite a while longer.