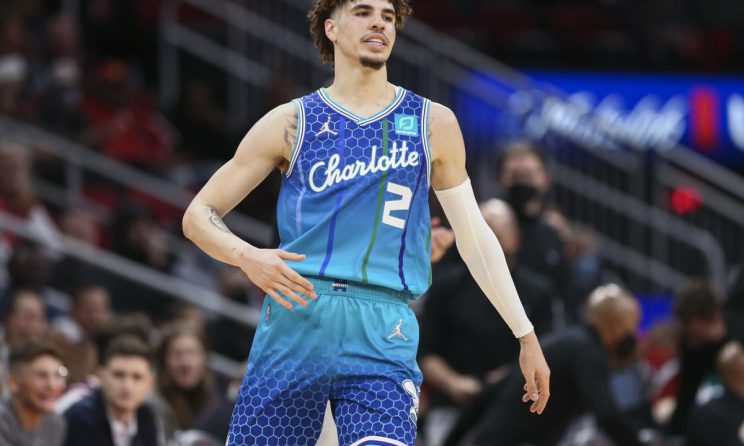 Even after his worst game of the season, Stephen Curry did enough to keep the No. 1 spot in our weekly MVP Race rankings while LaMelo Ball entered our rankings for the first time.

Check out the full rankings for Week 4 below.

A shocking dud of a performance on Tuesday night was not enough to move Curry from the top spot in our rankings this week, as the sharpshooter has been spectacular enough – even just before that game against the Phoenix Suns – to stay No. 1 in our MVP race. Curry’s three-game stretch before the Suns game included averages of 30.0 points and 8.0 assists on 52.4 percent shooting, all of which were wins for the Golden State Warriors.

Giannis Antetokoumnpo has helped the Milwaukee Bucks right the ship recently, as the reigning champions have won seven games in a row, the last four of which have come with an 81 point margin of victory. In that run, the Greek Freak is averaging 27.9 points, 12.7 rebounds, 5.6 assists, 1.1 steals and 2.0 blocks – just the usual two-way brilliance from the best two-way player in the game.

The league’s current leading scorer by average, Kevin Durant has maintained his awesome level of play recently, averaging 28.5 points, 6.0 rebounds, 8.3 assists, 1.5 steals and 1.3 blocks over his last four outings, a stretch in which the Brooklyn Nets have gone 3-1. Only somewhat concerning is the fact Durant is averaging over 40 minutes nightly in that span, a number the Nets will want to monitor going forward.

After sitting out four games due to injury, Nikola Jokic returned with a splash – and against none other than the Miami Heat after the scuffle that got him suspended. Jokic made his comeback explosively, scoring 24 points, securing 15 rebounds and dishing out seven assists on 9-of-14 shooting. Jokic and his brothers celebrated in a Miami nightclub afterward, in a scene that looked all too fun.

While Jokic did suit up on Monday, Miami’s own MVP candidate, Jimmy Butler, did not, which partly explains the lopsided final score. Butler is nursing a tailbone injury, one that has him questionable for the Heat’s game on Wednesday night against the Cleveland Cavaliers.

Paul was vital in the Phoenix Suns’ Tuesday night victory over the equally hot Warriors, producing 15 points, 11 assists and five steals while forcing Curry into one of worst performances of the campaign.

DeMar DeRozan has kept up his steady, strong play recently, averaging 26.3 points and 5.7 rebounds while shooting 54.5 percent from the floor over his last three games, a stretch in which the Chicago Bulls have gone 2-1. The Bulls currently sit second in the East with a 14-8 record, thanks in large part to DeRozan’s excellent campaign, arguably the most impactful of his long career.

After a slow start to the season, both Trae Young and the Atlanta Hawks have really righted the ship of late, winning seven games in a row before a defeat last week against the New York Knicks. Either way, Young has been fantastic lately, putting up 28.4 points and 8.8 assists on 45.2 percent shooting from beyond the arc over his last eight appearances.

Despite the flak he and the team continue to get over their playoff failures in recent years, Rudy Gobert remains one of the best centers in basketball, leading the league in nightly rebounds, as well as in field-goal percentage and effective field-goal percentage while being the Utah Jazz’s most impactful player.

DeRozan’s partner in excellence this season has been Zach LaVine, who just put up 25 points, six rebounds and five assists in the Bulls’ latest win, a 14-point victory over the plucky Charlotte Hornets.

For the first time this season, Devin Booker has made an appearance in our MVP rankings, and with good reason, as the Suns are arguably the best team in basketball at the moment with Booker at the helm. Paul may lead the way but Booker’s clutch shot-making and ability to score from anywhere on the floor have been huge, too. Booker will miss some time coming up, however, due to a hamstring injury. More on that in the link below.

More and more, James Harden has looked like his MVP self lately, with his best moment of the season coming on Tuesday night when the bearded superstar put up 34 points, 10 rebounds, eight assists and three steals on 11-for-20 shooting in a two-point win over the Knicks. A conversation prior to the game with the legendary Reggie Miller may have motivated Harden, as Miller helped remind Harden that he’s a former MVP.

One of the best big men in basketball finally has the appropriate supporting cast around him, for just the second time in his career, and it has helped both player and team immensely. Karl-Anthony Towns has been fantastic lately, putting up 24.0 points, 8.0 rebounds and 3.1 assists over his last eight games, seven of which have been wins for the Minnesota Timberwolves, who currently sit seventh in the West at 11-10.

The explosive Ja Morant has been out since Nov. 26 due to a knee injury, one that could keep him out for a couple of weeks, per his head coach, Taylor Jenkins. It’s a shame, too, as Morant was playing some of the best basketball of his career before going down. Odds are, however, he’ll return to form once he does get cleared for duty.

Another first-time player in these rankings, LaMelo Ball has been one of the best guards in the East this season, and he’s been doing it on both ends of the floor, as attested to by his nearly 2.0-steals-per-game average. With him on the floor, the Hornets are 8.0 points per 100 possessions better than when he sits, and he’s one of just four players this campaign to be putting up at least 19.3 points, 7.8 rebounds and 8.2 assists, along with Harden, Russell Westbrook and Luka Doncic. Imagine if the Warriors had drafted him over James Wiseman? A scary thought.