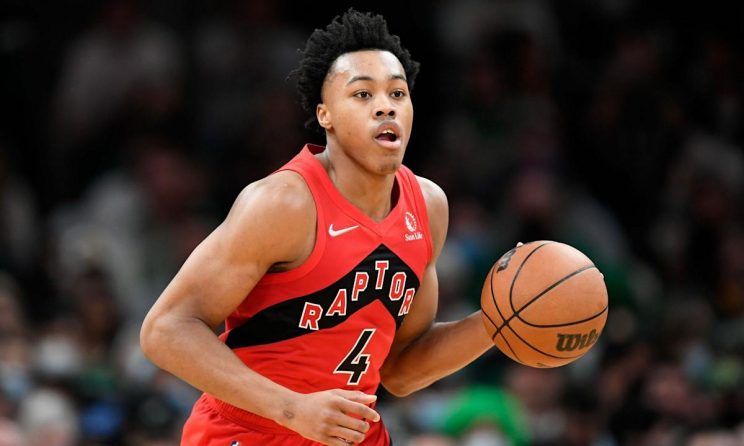 Toronto Raptors head coach Nick Nurse on Friday commended Scottie Barnes after the rookie led his team to a blowout win on the road over the Boston Celtics.

Barnes finished with a game-high 25 points, 13 rebounds — including six on the offensive glass — and two assists in the 115-83 victory at TD Garden. He converted on 11-of-17 shot attempts from the field, including 1-of-2 from 3-point range, in 35 minutes of work.

Nurse, afterward, detailed what he liked most about his performance.

I thought he was excellent. What I liked the most is he was at the front of the rim a lot tonight — put backs, cuts and drives. That’s what we like to see. He is getting to be able to use some of that size and length. He had a really good game, that’s for sure.

Barnes registered 12 points, nine rebounds, one assist and one steal during his debut on Wednesday but Nurse thought he played with more composure on Friday versus the Celtics. He was active on both ends of the floor, bringing energy and effort on every play.

The fourth overall pick has been tasked with leading the offense at times, a role he has flourished in. He is consistently looking to get his teammates involved with the ball in his hands but he also knows when to keep it and make a play for himself.

Barnes knows when he plays hard, the Raptors will have a chance to win.

I would just say when I just play hard and the team gives us constant confidence, it just helps get me going. Me just playing hard throughout the game just takes things off my mind and helps me play more free. We just moved the ball a little bit more today.

Nurse said previously that Barnes will have the opportunity to log heavy minutes this season and play through his mistakes. However, there didn’t look to be many mistakes by the rookie on Friday after leading the Raptors to victory.

Nick Nurse: Scottie Barnes will have a huge role with Raptors

NBA rookie grades: Examining the debuts of each lottery pick