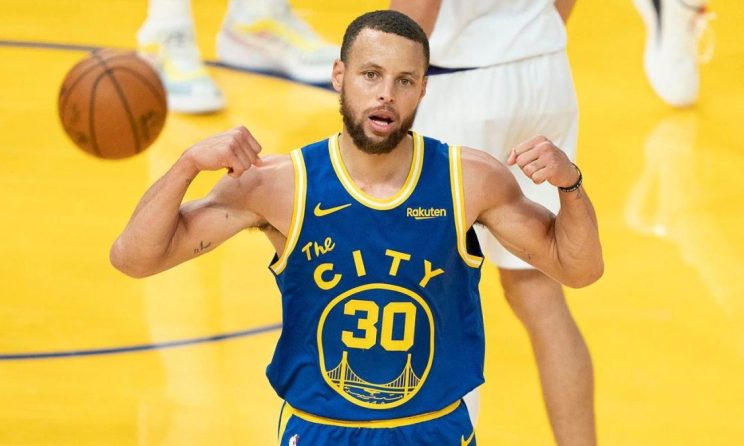 NBA fans have a lot to be thankful for. On a nightly basis they get to watch the world’s best basketball players and some of the most elite athletes go head-to-head. Thus, it only seemed fitting to use this year’s Thanksgiving holiday as an opportunity to express some gratitude for a league that provides endless entertainment to millions around the globe. Here are five reasons for fans of the best basketball league in the world to be thankful this season.

It’s not often sports fans unanimously agree on anything, but you’d be hard-pressed to find anyone who says Stephen Curry isn’t the best shooter in NBA history. The dude is just unreal. He has completely redefined the game and the type of shots that are practiced in rec gymnasiums across the country, and in his 13th season he appears to be as good, or maybe even better, than ever. It feels like he breaks a shooting record every night, and in turn he and the Warriors are absolutely must-watch television.

As a fan of the game, it’s awesome to watch Curry at the peak of his powers just bend a defense to his will, and then snap it with a flick of his wrist. He will be remembered as a pioneer of the game, and fans today are lucky to get to watch his career as it unfolds.

Has LeBron James had a better NBA career than Michael Jordan? That’s debatable. One thing that isn’t debatable, though, is that James will absolutely be remembered as one of the best players to ever lace them up when he ultimately decides to call it quits. James’ historic career has stretched nearly two decades, and while he may no longer be at his absolute peak, basketball fans should cherish whatever he has left in the tank, because when he does retire, the game will miss him.

Plus, he’s still pretty darn good. He has had to miss some time this season due to injury issues, but when he’s been out on the floor he’s still been extremely effective. For example, James dropped a season-high 39 points — including five 3s — to propel the Lakers to an overtime win over the Pacers in Indiana on Thanksgiving eve.

Like Jordan, James is the type of player who fathers will be telling their children stories about. He’ll have future fans of the NBA saying “man, I wish I got to watch him play in person.” So, much like with Curry, fans today should be thankful that they still get to watch one of the game’s all-time greats.

We just spent time talking about two well-established veterans, but NBA fans should also be grateful for the plethora of promising — and extremely exciting — young players all over the league. Check out this list of names:

All of these players are under 25 years old. The list of star players under 28 is exponentially longer and includes names like Giannis Antetokounmpo, Joel Embiid, Nikola Jokic, Zach LaVine and Karl-Anthony Towns. With so much young talent dispersed across the league’s landscape, it’s safe to say that the game is in good hands moving forward. NBA fans should be very thankful that there doesn’t appear to be any shortage of talent on the horizon.

4. Growing global impact of the game

Just like there is a plethora of extremely exciting young players, there is also a bunch of talented international players populating the NBA. The league’s reigning MVP, Nikola Jokic, is from Serbia, and the MVP runner-up from last season — Joel Embiid — is from Cameroon. Giannis Antetokounmpo, the reigning Finals MVP, is Greek. The reigning Defensive Player of the Year, Rudy Gobert, is French. Plus, let’s not forget about the Slovenian Luka Doncic, who has quickly established himself as one of the NBA’s brightest stars.

This is a testament to the growing global impact of the game. The NBA has grown increasingly international over the past couple of decades, and that trend isn’t going to stop. And that’s a good thing given all of the talent — and flair — that international players bring to the league. Fans have benefitted in a major way from the globalization of the league, and they should be grateful for it.

5. Fans back in arenas

After two straight seasons of limited-to-no attendance, fans have to be happy to be back in full arenas this season. After all, there’s just no comparison to the atmosphere cultivated by a capacity crowd, as fans are an integral aspect of the overall NBA experience. The 2019-20 season was put on pause for several months and ultimately resumed in the bubble in Orlando with no fans in attendance.

Last season, teams were back in their own arenas, but fan attendance was either extremely limited or not allowed at all for the first half of the season. This season, though, things are finally back to normal, albeit with some added precautions in place. Nonetheless, such precautions are a small price to pay to be able to see the world’s best basketball players do what they do in person. Games are simply better when there are fans in the building.