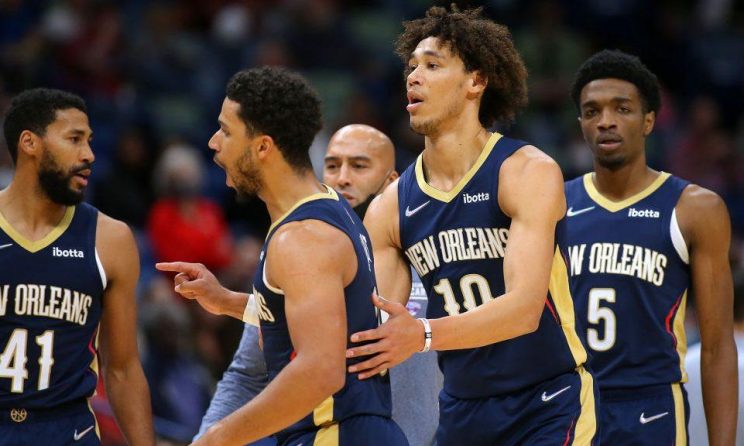 The Pelicans’ most visible problem: They stink.

New Orleans fell to 1-11 with a 108-100 home loss to the lowly Thunder last night. The game got particularly ugly in the second quarter. In fewer than four minutes, the Pelicans got five technical fouls – one by Jonas Valanciunas, one by Devonte’ Graham, one by Jaxson Hayes then two by Josh Hart (who was automatically ejected).

“It’s not the losing streak. It’s not one quarter. It’s our approach to this game,” Green said. “There were moments in the game where we just didn’t have guys who didn’t compete hard enough for me. Hard enough for our team. That’s a non-negotiable for me. That’s the deal. That’s who we are. As the leader of this team, I can’t have that. I can’t have guys on the floor if they aren’t going to give 110%.”

“Our guys thought they got fouled, and we didn’t get the call,” Green said. “But we aren’t going to get those calls. We haven’t earned them. So what are we complaining about? Until we earn it, we’re not gonna get that. That’s the deal. I talked to our guys about it. We have to keep our composure. Our margin for error is too small to do what we did tonight.

“We need Josh. We need Jonas. Jaxson Hayes can’t get technicals. We need everyone to compete and play at a high level to win the game.”

Green is right: The Pelicans have minimal margin for error with Zion Williamson and Brandon Ingram sidelined. New Orleans has bigger problems than missed calls, and giving the opponents free throws hurts further.

But that’s a harsh way to deliver the message.

Green connected well with players as an assistant coach. Reaching them as the head coach is a different challenge.

Maybe this group will respond positively to his comments.

Or maybe this will give the Pelicans yet another problem.

More on the Pelicans