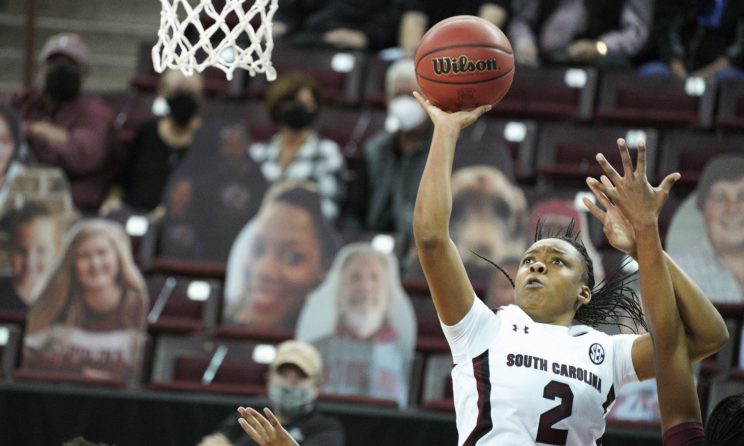 The women’s college basketball season is underway even if the No. 3 ranked Connecticut Huskies still haven’t played due to COVID-19 protocols.

The No. 1 South Carolina Gamecocks have held their spot and continue a non-conference slate meant to test them early. The Pac-12 is ready to tip off what should be another season of exciting parity, and could Texas’ Charli Collier break out 40-plus point game that bests even Kevin Durant’s school mark?

Here are this weekend’s games between top 25 teams. The full schedule can be found here.

TEAM CATCH UP: South Carolina coach Dawn Staley doesn’t schedule cupcake programs in the non-conference part of the schedule. The Gamecocks have already played South Dakota, which earned votes in the preseason AP poll, and No. 21 Gonzaga in back-to-back wins of 10 points or fewer. They had six victories of that margin all of last year.

N.C. State is 2-17 all-time against the No. 1-ranked team in the country and it’s the first time since 1980-81 that the Wolfpack and Gamecocks have met while both are ranked in the top-10.

KEY PLAYERS: Aliyah Boston, the reigning SEC freshman of the year, didn’t play up to her standards in the past two games, Staley said via The State. She’s averaging 11.0 points on .500 shooting with 8.3 rebounds per game and a total of two blocks. Destanni Henderson and Zia Cooke are each averaging 17.7 points.

N.C. State will rely on Elissa Cunane, who is averaging 14.0 points and 4.5 rebounds in 21.0 minutes per game so far. They’ve played North Florida and NC Central and won by an average margin of 33 points.

TEAM CATCH UP: DePaul opened its season with a 93-91 loss to No. 12 Texas A&M and has the second highest-scoring offense this season (109.5 points). The former Big East rivals will meet at the Jimmy V Classic at Mohegan Sun in Connecticut on Friday. DePaul leads the series, 17-15, and won the last meeting in the 2016 NCAA tournament. The Blue Demons, seeded sixth, beat the No. 3 Cardinals, 73-72, to reach the Sweet 16.

KEY PLAYERS: Sonya Morris, Dee Bekelja, Lexi Held, Deja Church and Kendall Holmes, who has come off the bench both games, are averaging in double figures for DePaul and shooting a combined 54.8 percent.

That will drop precipitously against Louisville, which is allowing an average of 55 points a game and keeping opponents to shooting 30.6 percent. Dana Evans is averaging 17.5 per game on 13-of-31 shooting (41.9 percent)

TEAM CATCH UP: If 2019-20 taught us anything, keep an eye on every Pac-12 game this weekend. UCLA and Arizona split their two games last year with each winning on their home court. The Bruins’ victory gave the Wildcats their first loss by dropping them to 13-1. Arizona had a tighter season opener, beating Northern Arizona 76-63.

KEY PLAYERS: UCLA’s Michaela Onyenwere is already off to a good start, scoring 22 points and eight rebounds behind Charisma Osborne’s 31 points and Natalie Chou’s 16 in the 98-49 win over Cal State Fullerton.

Cate Reese had a double-double of 21 points and 11 rebounds in Arizona’s win. Aari McDonald had 18 points, making 3 of 9 3-point attempts, with seven rebounds and eight assists.

OF NOTE: UCLA coach Cori Close is one win away from No. 200 with the Bruins and would become only the third coach in program history to do so. She has the highest win percentage of the three. If Arizona wins, it will be the first time in program history the Wildcats won a game in which both teams were ranked in the top 10.

TEAM CATCH UP: Iowa State started its season without coach Bill Fennelly, who self-quarantined after coming into contact with a person who tested positive for COVID-19. The Cyclones loss is to South Dakota State, 76-69, the Saturday after Thanksgiving.

KEY PLAYERS: The Gamecocks will key in on junior Ashley Joens, who is averaging 31.3 points and 10.0 rebounds in the first three games. She averaged 21.1 and 10.7, respectively, last season. Joens is shooting 55.6 percent from the floor, including 41.2 percent from 3-point range. She has four blocks and three steals so far. Kristin Scott is averaging 12.0 points and 6.7 rebounds.

TEAM CATCH UP: Indiana opened by doubling up on Eastern Kentucky, 100-51. The Hoosiers were led by 26 points from sophomore 6-foot-2 forward Mackenzie Holmes.

Kentucky won its first two games by at least 20 points each.

KEY PLAYERS: Rhyne Howard, a 6-foot-2 junior guard contending for player of the year, served a two-game suspension for “for not upholding the standards of the program” and was set to make her return Thursday night. Her 23.4 points per game last year was second in the nation, but she was left off the postseason All-American first team and is using it as extra motivation.

Chasity Patterson averaged 20.0 points on 52 percent shooting and Dre’una Edwards, a transfer from Utah who won the 2019 Pac-12 freshman of the year award, averaged 14.5 points and 8.0 rebounds in Howard’s absence.

TEAM CATCH UP: Baylor edged out South Florida, 67-62, on Tuesday for the program’s 1,000th victory despite shooting 28.9 percent in the first half. The Bears are the 15th women’s program to reach that mark.

Arkansas played four games in five nights last week and finally faltered in the finale, a 115-98 loss to No. 14 Maryland.

Taylah Thomas has controlled the boards (8.5 rpg) while the other four starters have each led the Razorbacks in scoring a different game. Chelsea Dungee, Makayla Daniels, Destiny Slocum and Amber Ramirez are all averaging double digits in scoring.

Texas forward Charli Collier is off to a hot start. (AP Photo/Shawn Millsaps)

TEAM CATCH UP: Texas A&M has played Lamar (0-4) twice, winning by 16 and 17 respectively, and had the two-point win over DePaul. They’ve allowed an average 71.7 points to opponents over their three games

The Aggies are 13-9 all-time against Texas, though they’re on a four-game losing streak and last met in 2014.

Charli Collier, a 6-foot-5 junior center, leads the nation in scoring thanks in large part to her 44 points on 84.2 percent shooting during a 106-69 win over North Texas. It’s the fourth-most points in Texas women’s history and is seven points more than Kevin Durant’s highest-scoring game at Texas. He’s her favorite player and she wears his No. 35.