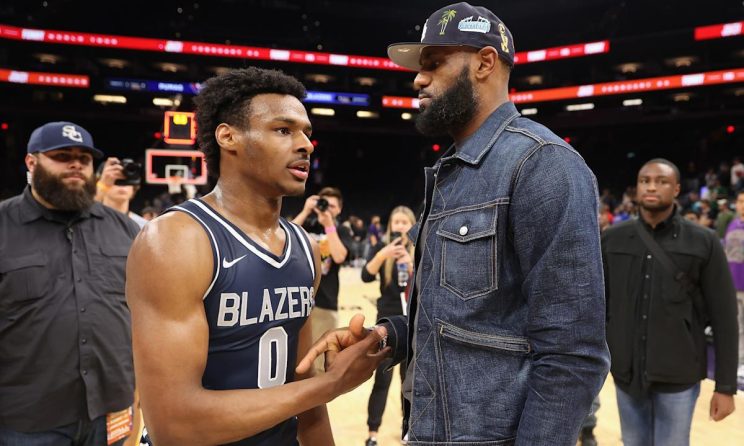 LeBron James doesn’t know if or when he will play his final NBA season, but he definitely seems to know which teammate he wants.

In an interview with The Athletic’s Jason Lloyd, the Los Angeles Lakers star stated outright that he plans to spend the last year of his NBA career playing alongside his eldest son, Bronny:

“My last year will be played with my son,” James said. “Wherever Bronny is at, that’s where I’ll be. I would do whatever it takes to play with my son for one year. It’s not about the money at that point.”

Under current NBA rules, the earliest the 17-year-old Bronny could enter the league is the 2024 NBA draft, which would mean the elder James will spend at least three more seasons in the league. There has, however, been plenty of discussion in the past around the NBA ending the one-and-done era, so Bronny entering next year’s draft isn’t entirely out of the realm of possibility.

The bigger question around the younger James reaching the NBA isn’t eligibility, though. It’s talent.

Bronny James is, by all accounts, an advanced talent at the high school value and should have his pick of colleges if he goes that route. Rivals has him as a four-star recruit from Duke, Kansas, Kentucky and North Carolina, but reaching the NBA is an entirely different animal, and pronouncing that the end of your legendary NBA career hinges on your son making the league is an extraordinary amount of pressure to put on a teenager.

Many more four-star recruits miss the NBA entirely than crack a team’s rotation. Bronny James certainly has some good genes, but it remains to be seen if NBA teams will have much interest in a 6-foot-2, four-star point guard. James and his game obviously still have plenty of time to grow, so it’s not out of the question, just keep in mind that Rivals currently has 130 recruits as five- and four-star players in the Class of 2023.

Four-stars not making the NBA isn’t usually newsworthy, but LeBron has basically guaranteed it will be should Bronny come up short.

LeBron James wants his son with him in the NBA. (Photo by Christian Petersen/Getty Images)

Teams could also be interested in Bronny just by virtue of his father, as it’s not every day that a prospect comes with the implied promise of being able to add one of the greatest players in league history for cheap. The cherry on top of the act of drafting Bronny James could simply be Bronny himself.

How this plays all depends on how both father and son age, and the only way to find that out is wait and watch.

If Bronny were to be eligible for the draft in 2023, that would coincide nicely with his father hitting free agency. LeBron James’ current contract with the Lakers runs out in the summer of 2023, and he’s not ruling out anything.

That includes another return to the Cleveland Cavaliers, who are currently third in the Eastern Conference at 35-23 and have two players — Jarrett Allen and Darius Garland — at this weekend’s All-Star Game.

“The door’s not closed on that,” James told The Athletic Saturday following the East’s team practice on the campus of Cleveland State. “I’m not saying I’m coming back and playing, I don’t know. I don’t know what my future holds. I don’t even know when I’m free.”

James leaving after next season would certainly be bad news for the Lakers, who are struggling this year and may have problems retooling for next season. Russell Westbrook, whose Los Angeles tenure is already considered a failure by many accounts, has one of the most immovable contracts in the NBA, with $44 million due to him this year and $47 million due next year should he exercise his player option.

No Westbrook trade would mean doubling down next season on a core that has the Lakers at 27-31 at the All-Star break. That might not be what James has in mind for the later years of his career.