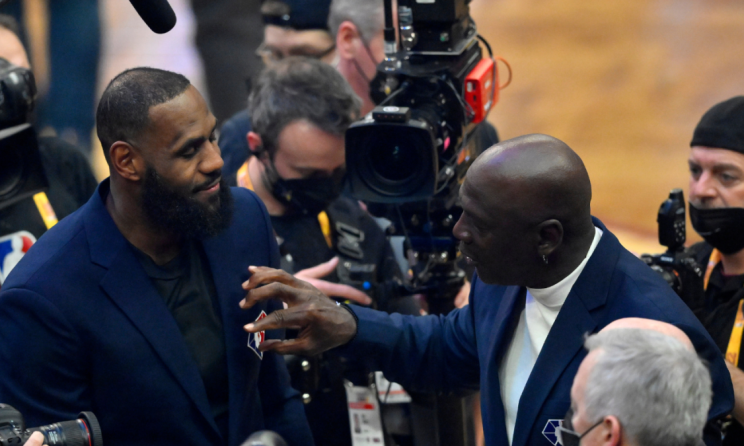 Stephen Curry took home All-Star Game MVP honors after scoring 50 points by making a record 16 3-pointers, but the two most dramatic moments of the night belonged to Michael Jordan and LeBron James.

First, it didn’t look like Jordan was going to make it to the halftime ceremony honoring the NBA’s 75th anniversary all-time team. As a new owner of the 23XI Racing team, he was at the Daytona 500 watching his driver, Bubba Wallace.

But in the grandest of fashion, after the race was over Jordan hopped jet and made it to Cleveland in time for the final three members of the all-time team — Stephen Curry, Magic Johnson and MJ — to be announced. Before the entrance:

Then the crowd reacts:

After the ceremony, LeBron and Jordan shared a private moment. We all love to compare these two as if they are adversaries, but it’s obvious the respect they have for one another goes way beyond all our dumb GOAT debates.

It was fitting, then, that LeBron, back in Cleveland, with Jordan in the house, seized the moment with a game-winning Elam Ending fadeaway that bore an almost identical resemblance to the patent fadeaways we watched Jordan sink so many times over especially the latter half of his career.

“It’s crazy that the game-winning shot tonight was a fadeaway, and it was inspired by MJ,” LeBron said after the game as he detailed the extraordinary influence Jordan had on him as a young kid growing up.

Given the moment and the setting, there couldn’t have been a more fitting ending to what was an entertaining All-Star Game.