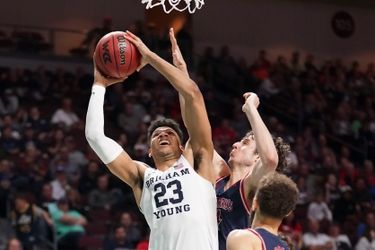 One name to keep an eye on with the Knicks in the second round? BYU power forward/center Yoeli Childs.

The Knicks interviewed Childs recently, per SNY sources, and those sources said Childs has been making a strong impression during interviews with teams who have picks in the early/mid second round.

The Knicks have the 38th pick in the second round. The club has interviewed dozens of players, so the fact that they interviewed Childs shouldn’t be blown out of proportion. But it does confirm that the club has a level of interest in the 6-8, 255-pound big man.

Childs was a finalist for the NCAA’s Karl Malone award, handed out to the top power forward in college basketball. He averaged 22 points and 9.7 rebounds per game last season, shooting 54 percent from the field. He also hit 49 percent of his 3-point attempts (2.4 per game).

Several teams said Childs, a senior, has impressed in his other pre-draft interviews.

It’s worth noting that teams in this uncertain draft may lean toward taking a player with a higher floor like the 22-year-old Childs, as opposed to a player who has a high upside but is less of finished product.