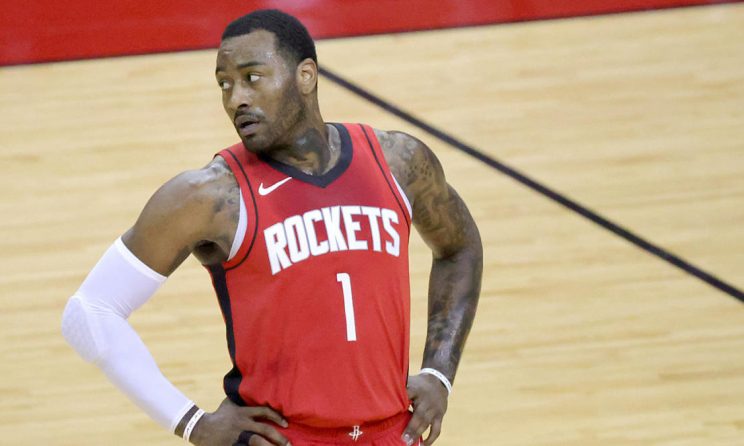 It’s a shame what’s going on with John Wall, who might not be the player he once was but remains more than capable of helping a number of teams. Instead, he’s effectively a healthy scratch every Houston Rockets game; a Did Not Play, Organizational Decision. Wall and the Rockets both want the same thing: A trade that will put Wall in a position to contribute elsewhere while netting Houston an asset or two.

Unfortunately, there’s a $92 million obstacle in the way of that happening. That’s what Wall is owed over this season and next (he’s making $44.3M this year and is 100 percent going to pick up his $47.4M player option for next season). Few teams have the ability, or interest, to take on that kind of salary, no less for a player who brings sub-All-Star impact with a bright-red-flag injury history.

The simpler solution would be for Wall and the Rockets to agree on a contract-buyout number, but Wall has shown no interest in that. He wants his money. All of it. And so, absent a buyout or trade, Wall could be stuck on the sidelines for a while. On Wednesday night, ESPN’s Adrian Wojnarowski called it “increasingly likely” that Wall won’t play at all this season.

“There are no plans for John Wall to play for the Rockets [this season]. It’s becoming increasingly likely that John Wall may not play anywhere in the NBA this season,” Wojnarowski reported. “The cost of his contract right now is just too prohibitive.”

Wall has dealt with chronic knee issues over the latter part of his career. In 2019, he ruptured his Achilles tendon. He missed all of the 2019-20 season after playing just 32 games the season prior. He hasn’t played more than half a full regular-season schedule since 2016-17.

Last December, Wall was traded from Washington to Houston in exchange for Russell Westbrook. He played 40 games for Houston last season and was pretty decent, all things considered. He averaged over 20 points and just under seven assists. His shooting has never been a strength, and he was again a low-percentage marksman at 40 percent from the field and 31 percent from 3 for Houston.

He is not the same kind of creator he once was, but that’s a high bar. For half a decade, Wall was arguably the league’s best passer, a skill made even more potent by his ability to blow past pretty much any defender and his great feel for pick-and-roll action. There is still some of that game left. But so far, no team believes there’s enough offensive impact left, to say nothing of his defensive questions, to justify almost $100 million, and frankly, that’s quite understandable.

It stinks that Wall isn’t playing basketball right now. But it’s his decision. He’s entitled to his money. He earned it. But right now, not playing is the cost as the Rockets, with no immediate designs on winning, are content to move forward with their rebuild while waiting for Wall’s contract to expire in 2023.