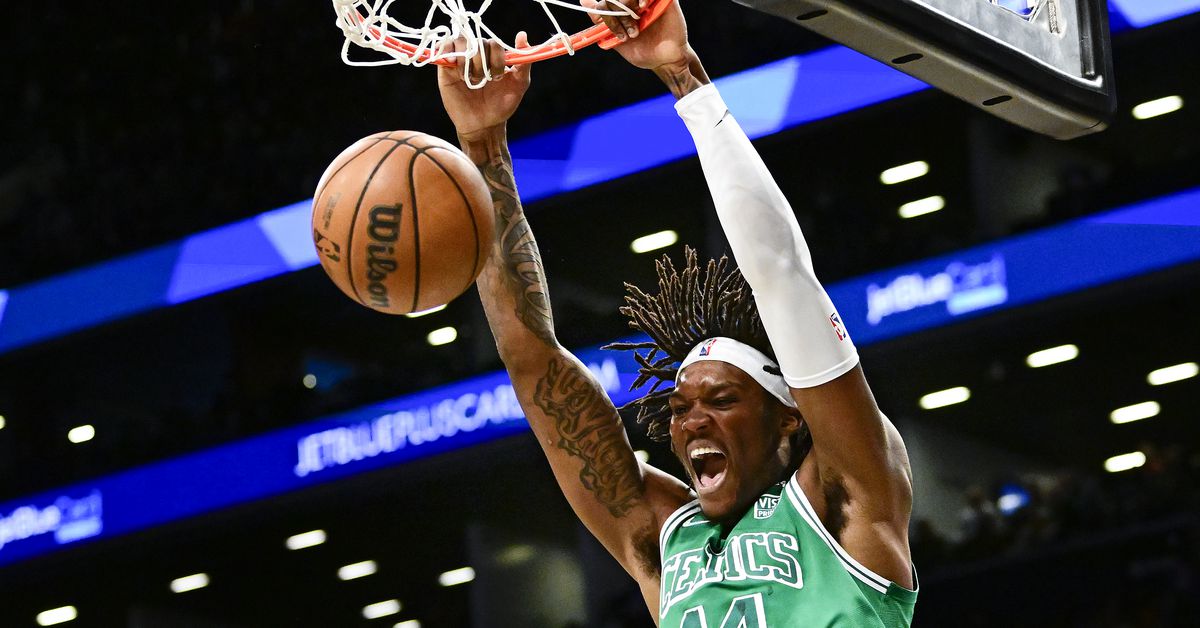 Boston entered the game having won 10 of their last 15. For the calendar year 2022, their 113.6 offensive rating would rank 4th and 103.2 defensive rating would rank 1st. For those of you doing the math at home, that’s a +10.4 net rating, a figure equivalent to a 60-win championship contender. Sure, they got victories against the league’s bottom feeders – Detroit, Orlando, Sacramento, and New Orleans (twice) – but it’s encouraging seeing some improvement after an unsteady first two months of basketball. Somehow, someway, they’re only 4.5 games behind the Heat for first place in the east.

The Nets have trended in the wrong direction since Kevin Durant sprained his MCL on January 15th. They’ve now lost nine straight, James Harden is in trade rumors, and Kyrie Irving remains unvaccinated. The overwhelming championship favorite ranks 10th in offense and 18th in defense. Without Durant – who was playing 40 minutes a night and having an MVP season – this team has cratered.

Boston led 28-2 at the 5:08 mark of the first quarter. It might have been the best seven-minute stretch of basketball in Celtic history. Jaylen Brown got it started with an elbow jumper, an and-1 drive, and a 26-foot pull-up three. Jayson Tatum and Al Horford each scored seven, as Brooklyn had more turnovers (5) and timeouts (2) than field goals (1). Boston’s game plan was to leak out in transition, but in their half-court offense, the ball was humming from side-to-side, as the team recorded seven assists on their first 12 makes. No team in NBA history had ever scored 28 of the game’s first 30 points.

James Johnson entered the game and injected energy in the lifeless Nets. He hit three contested layups and recorded a block, as Brooklyn responded to the 26-point deficit with an 11-0 run. Grant Williams answered by hitting a turnaround jumper, swishing a three, and and blocking a Cam Thomas last-second jumper. The Celtics led 35-16 after 12 minutes.

The Nets defense had the peculiar strategy of doubling Jayson Tatum each time he touched the ball. It didn’t matter if he was 30 feet from the basket, the second defender was always coming. It resulted in crisp ball movement that yielded open threes and uncontested layups. Marcus Smart scored 11 second quarter points on three 3’s and an absurd one-legged elbow jumper to beat the shot clock. Robert Williams went a perfect 4/4 from the field and added two blocks, and the Celtics led 69-43 at the half.

Their first half shot chart was a thing of beauty:

Boston responded to its 35-point first quarter with a 34-point second quarter. They had 38 points in the paint, dished out a ridiculous 19 assists, and forced 10 Brooklyn turnovers. Tatum and Brown combined for 30 points and 8 assists on 11/13 shooting.

These Celtics starters have never lost a playoff series when fully healthy.

The Nets opened the second half playing a zone, and the Celtics missed their first two threes. But after a half-season of getting stifled by zones, Boston now appears comfortable dissecting it. They flashed to the middle, effectively used ball fakes, didn’t settle for contested jumpers, and moved the ball with poise. A Marcus Smart three at the 6:42 mark gave the Celtics a 35-point lead.

Brooklyn’s depleted roster wasn’t lacking for effort. They eventually cut the lead to 20, but without their three stars, there’s no way they can compete with one of the NBA’s hottest teams. Jevon Carter had a season high 21 points on seven 3’s and Johnson scored 17 on 8/11 shooting.

Payton Pritchard, Aaron Neismith, Romeo Langford, and Enes Freedom played most of the fourth quarter, as the starters got a much deserved rest. Bruno Fernando had a thunderous dunk around the two minute mark. The Celtics won the game 126-91.

Boston shot 53 percent from the field and dished out 32 assists. Only one Nets player shot over 50 percent, they were held to 38 percent shooting for the night, and their starters only scored 10 points by halftime — the lowest such mark from any starting group this season.

Boston will look to extend their winning streak to seven games this Friday at 7:30, as they host Nikola Jokic and the Denver Nuggets