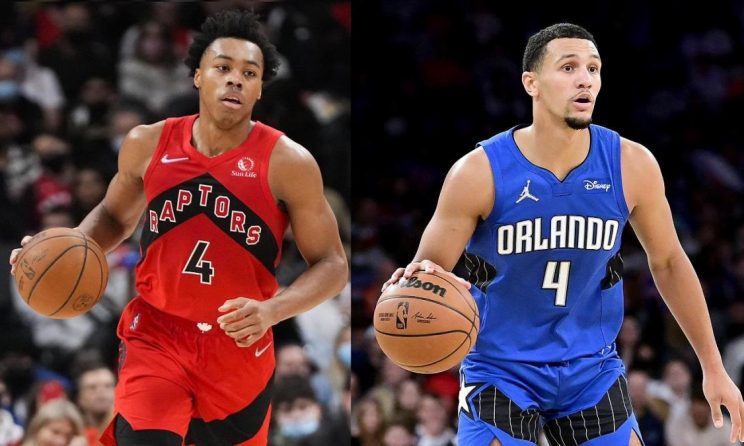 A day before facing his hated rival, Jalen Suggs, for the first time as a professional, Toronto Raptors forward Scottie Barnes had some harsh words for the Orlando Magic guard.

“As a basketball player, he’s really talented,” Barnes said Thursday. “He can shoot the ball, drive. He gets to the basket, is really quick, plays really hard and plays his heart out every time he’s on the floor.”

Hm. OK. I guess those words weren’t particularly harsh. But what about his personality?

“I would say, as a friend, he’s a loving person, he has an open heart,” Barnes continued. “He’s a good person that you can be able to talk to,” Barnes said. “I could call him anytime and he’ll be able to talk to me and just show me a bunch of love.”

Barnes and Suggs might be linked forever because of their respective draft positions. The Raptors chose Barnes at No. 4 this past July, surprising many fans, executives and analysts who thought they’d take Suggs. Orlando took Suggs with the very next pick.

That night at Barclays Center, Barnes and Suggs saw each other in a back room. “We were just so proud of each other,” Barnes said. “We’re family. Like, we’ve been with each other, we’ve been knowing each other since I was like 15, 14, and we just really connected and bonded. So we were very happy for each other.”

In 2019, Barnes and Suggs (and No. 1 pick Cade Cunningham) were teammates on the United States’ U19 FIBA World Cup team. At summer league, Suggs said that Barnes has an “infectious” personality and is “someone you want to be around.”

Barnes said Suggs is “like a brother to me,” and they know each other’s families. On Friday, they will be “competing at the highest level, trying to get the best out of each other.” He did not, however, sound particularly interested in the fact that he and his friend have been pitted against each other by fans on the internet.

“Social media is going to do its thing,” he said, adding that “I don’t think it matters to really either of us. We’re both just happy for each other. We just wish each other the best of luck.”

Unsurprisingly, Toronto coach Nick Nurse said he hasn’t thought much about the Barnes vs. Suggs storyline. He did, however, acknowledge that there’s a reason this matchup will get some attention.

“I think it makes sense that it is a thing,” Nurse said. “It was probably the one spot in the draft that that people really focused in on. I think for a long time everybody thought it would go the opposite way, probably, and it went the way it went. So, there’ll certainly be some of that, I would imagine.”

Nurse said what he’s focused on is Barnes’ development. He hopes the Raptors guard Suggs — and the rest of the Magic — well, and he wants Barnes to think score when driving to the basket. Barnes confirmed this: “He’s just been on me every day, just trying to tell me to attack the rim, be more physical, drive with aggression and just try to get those looks.”

In an alternate timeline, maybe Suggs is getting confused by Canadian currency and Barnes is getting familiar with Disney World. Given the way Barnes talks about Suggs, though, it’s hard to imagine any universe in which there is bad blood here.

Besides, it is already evident that Barnes’ skill set makes him an ideal Raptor. He said he recognized this when Toronto worked him out before the draft.

“Defense, winning basketball, having a high IQ, being versatile, being long, athletic, it fits right in with the organization, with what their principles are,” Barnes said. “So it was just like a perfect match.”