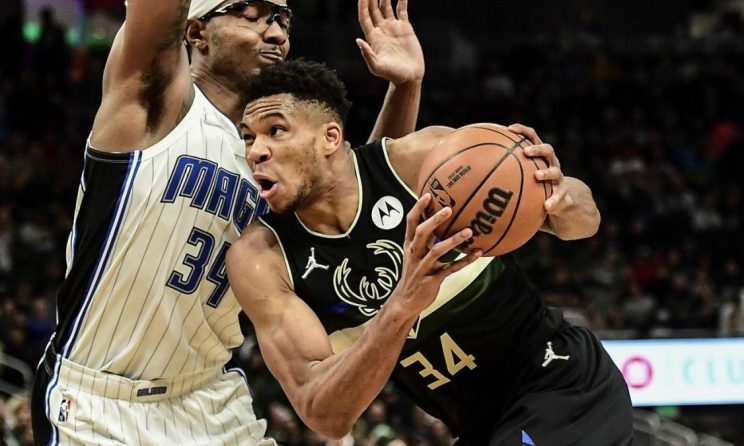 MILWAUKEE — Earlier this week, Giannis Antetokounmpo made headlines with a dominant 47-point, nine-rebound performance against Anthony Davis and the Los Angeles Lakers. But if he’s proven anything so far in his career, it’s that he’s always capable of one-upping himself. He did just that in the Milwaukee Bucks’ 117-108 win over the Orlando Magic on Saturday night.

Just 90 seconds in he cruised into the lane for a spinning jump hook, and never looked back. He finished the night with 32 points, 20 rebounds, five assists, three blocks and two steals on 8-of-16 from the field and 15-of-23 from the free throw line. It wasn’t the best game Giannis has ever played, but it was one of the most complete.

It also made history. Giannis needed just 30 minutes to register those numbers, which gave him the fastest 30-point, 20-rebound, 5-assist game in NBA history — or, at least, since minutes started being tracked back in 1951. In addition, this was the third 30/20/5 game for Giannis. The only players with more such performances (since 1982) are Charles Barkley (8), Kevin Garnett (4) and Tim Duncan (4). Pretty elite company.

Not that many teams do, but the Magic simply had no answer for him around the basket. He went 7-of-10 around the rim, and got to the line for a whopping 23 free throws, which were the most by any player this season and one shy of his career-high. When he needed to overpower a young Magic front court he did, and when a little more finesse was necessary he showed that part of his skillset as well. And sometimes, like this outrageous possession in the third quarter, he combined the two.

He was also a menace on the defensive end. There were the 18 defensive rebounds, which were crucial in the absence of Brook Lopez. So often this season the Bucks have struggled on the glass. Not so in this game. He swiped two steals, blocked two shots and deflected some other lobs at the rim. His ability to impact the game on both ends like this is what elevates Giannis to a different level.

“The rebounding and the blocked shots, and to some degree the steals, but especially the blocked shots and rebounding are indicative of his activity,” Bucks head coach Mike Budenholzer said. “He’s covering ground, he’s getting to spots, he’s just playing. And that takes a lot of energy and effort on that end of the court, and he gives us a lot on the other end. So credit to him that he’s kind of dialed that up and we need that from him.”