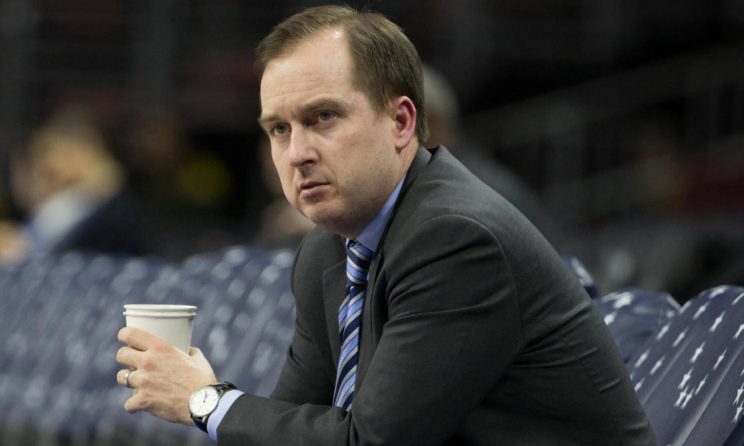 The Philadelphia 76ers have had a busy offseason so far, bringing in Doc Rivers as their new head coach, and Daryl Morey as their new president of basketball operations. After such disappointing endings to the last few seasons and tremendous upheaval off the court in the last few weeks, noise about shaking up their roster has only intensified.

There’s talk about moving one or both of Tobias Harris and Al Horford, each of whom has underwhelmed in Philadelphia, but the more consequential discussion revolves around the two superstars, Joel Embiid and Ben Simmons. Questions about their fit together have been asked for years, and the running topic of conversation was kicked up again with Morey’s arrival.

But because everyone’s been talking about this Sixers group for so long, most of the takes are just recycled at this point. So what better time to get a fresh opinion from someone who was closer to Embiid and Co. than just about anyone. That’s right, former Sixers GM Sam Hinkie. The originator of “The Process” gave a rare interview on Friday, joining Pablo Torre on ESPN Daily. During the podcast, he shared his thoughts on the Embiid and Simmons trade talks.

Torre: What do you think when you hear, invariably, rumors about ‘you know what, they gotta trade this guy?'”

Hinkie: Oh gosh. Don’t people remember what it took to get them? For all of them. Getting a star player in the NBA is not impossibly hard, but close. It requires either an incredible amount of luck, or an amazing amount of time, or some other way to try and get at it. So what is Jo? 26? To have a young player who is nominally, in a traditional sense, just entering his prime, and say ‘oh we’ve got to blank.’ No, job one is you’ve got to get great players on your team, and he is one.

Hinkie is trying to be diplomatic, so he doesn’t really say anything too interesting or declarative here, but it’s pretty easy to read between the lines. In short: trading either of them would be extremely stupid.

He frames it around the idea that Embiid and Simmons are elite talents, and you shouldn’t get rid of those kinds of players once you get them. It’s hard to argue with that point of view. While they aren’t a perfect fit, it’s easier to work around the margins and find the right role players than it is getting someone with Embiid or Simmons’ ability. Just because the Sixers haven’t been able to do that doesn’t negate the general point.

At the same time, you have to consider Hinkie’s history in regard to this topic. He was the one who put “The Process” into motion, so obviously he isn’t going to argue that the Sixers should trade the two biggest prizes from that era. That would be contradicting everything he worked for while he was in charge of the team.

In any case, it will be interesting to see what Morey does with this Sixers group, and whether he’ll follow the advice of his former colleague, or take the club in a brand new direction.