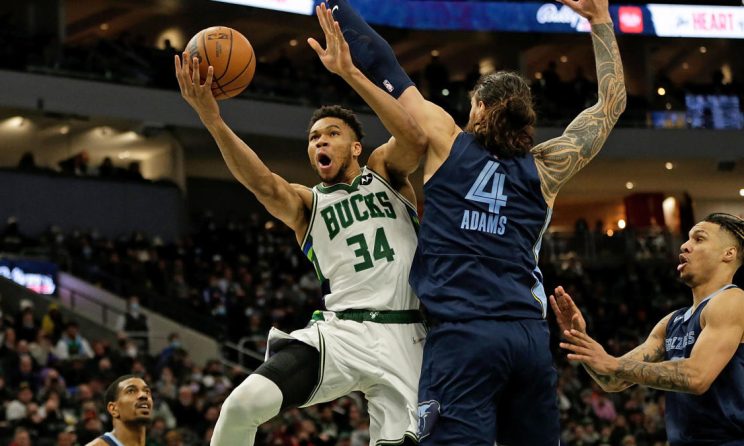 MILWAUKEE — In the final minute of the first quarter on Wednesday night, Giannis Antetokounmpo drove to the basket and lost control of the ball on the way up. Most players would have been on their way to a turnover in that situation, but Giannis somehow managed to bat the ball back up and into the basket – an impressive finish though not particularly memorable given his standards. It was notable, however, in that it gave the Bucks a 32-30 lead, and proved to be the winning basket.

The Bucks never trailed again, and generally coasted to a 126-114 win over the red-hot Memphis Grizzlies. Though Ja Morant and Co. were able to make things interesting with a late run, the Bucks led by double-digits for the majority of the game, and their 12-3 closing burst put things away in convincing fashion.

After a rough few weeks for the Bucks – 3-6 in their past nine games – Wednesday night’s win was a reminder of why, despite sitting in fourth place, they’re still the team to beat in the Eastern Conference.

On New Year’s Day, the Bucks cruised to a 23-point win over the New Orleans Pelicans to improve to a season-best 25-13. Since then, they’re just 3-6, including a shocking loss to the lowly Detroit Pistons. The cold streak has dropped them to fourth place in the Eastern Conference.

It goes without saying that no one on the Bucks is thrilled with such a poor run of form. In particular, they’ve been scratching their heads at their inability to consistently put together 48 good minutes of basketball. But things aren’t quite as bad as that 3-6 mark might indicate. For one, all of those losses were by single digits.

As for those three wins? Well, they’ve all come against other great teams, and they’ve all come in borderline dominant fashion. They beat the Brooklyn Nets by 12, the Golden State Warriors by 19, and the Grizzlies by 12. That’s three of the top-seven teams in the league, and they led by at least 18 points in each game and trailed for a combined five minutes and nine seconds.

“We show up to these games,” Giannis said after the win over the Warriors. “Maybe it’s the energy of the crowd, like the excitement around the game. But at the end of the day we have to realize that we are a very big target right now. Everybody wants to beat the champs.”

The Bucks’ tendency to get a bit lackadaisical in those less meaningful games is not a good habit, and they’ll need to break it in order to improve their playoff seeding. But when the lights are on, the Bucks are ready to go, and continue to prove that the path to the title runs through Milwaukee.

Jrue Holiday is back, and so is the big three

This season has not gone to plan for Jrue Holiday. He left the team’s opening night win over the Nets with a bruised heel, then suffered an ankle injury a few nights later against the San Antonio Spurs, which kept him sidelined for five games. Then, right as he was getting into a groove in December and early January, he briefly entered the league’s health and safety protocols due to an inconclusive COVID-19 test and also had another ankle problem.

His latest stint on the sideline lasted six games, and all told he’s missed 13 of the Bucks’ 46 games this season. He was back in action against the Grizzlies, however, and that was great news for the Bucks – even if he looked a bit rusty and finished with nine points, five rebounds and four assists on 2 of 8 shooting in 22 minutes off the bench.

The numbers might not have been great, but his impact was obvious. He got the assist to Giannis on an important basket in the closing minutes and was even guarding Jaren Jackson Jr. at times down the stretch.

With Holiday in the lineup, and Giannis and Khris Middleton also healthy, the Bucks’ big three is once again back together. Due to various injuries and COVID-19-related absences, that trio has played only 20 games together. In those games the Bucks are 17-3, and they have a plus-9.1 net rating with their stars on the floor together.

After trailing by double digits for nearly the entire game, the Grizzlies made a late surge on Wednesday, pulling to within three points with 2:32 to play. They simply do not give up, and against some teams they may have even gone on to win the game. Not against the Bucks, however. Specifically, not against Giannis Antetokounmpo.

Already in the midst of another terrific game, Giannis took over from that point on, delivering three straight buckets to slam the door. He threw down a powerful dunk in semi-transition, dropped in a deft little hook shot in the lane and drained an unstoppable fadeaway on the baseline.

“The skill, the fadeaway on the baseline, that’s a high-level, big-time shot,” Bucks head coach Mike Budenholzer said. “The hook, I think he and Khris played a pick-and-roll and got the defense moving a little bit. Got it to him in a good spot, and then out in transition he’s just out and he’s a force. Those are the kind of plays we need.”

Giannis finished with 33 points, 15 rebounds and seven assists, and proved once again that when all else fails, the Bucks can turn to him. More often than not, he’ll get the job done, which is why he’s once again in the MVP discussion, and has a real chance to become just the ninth player to win that award three times.