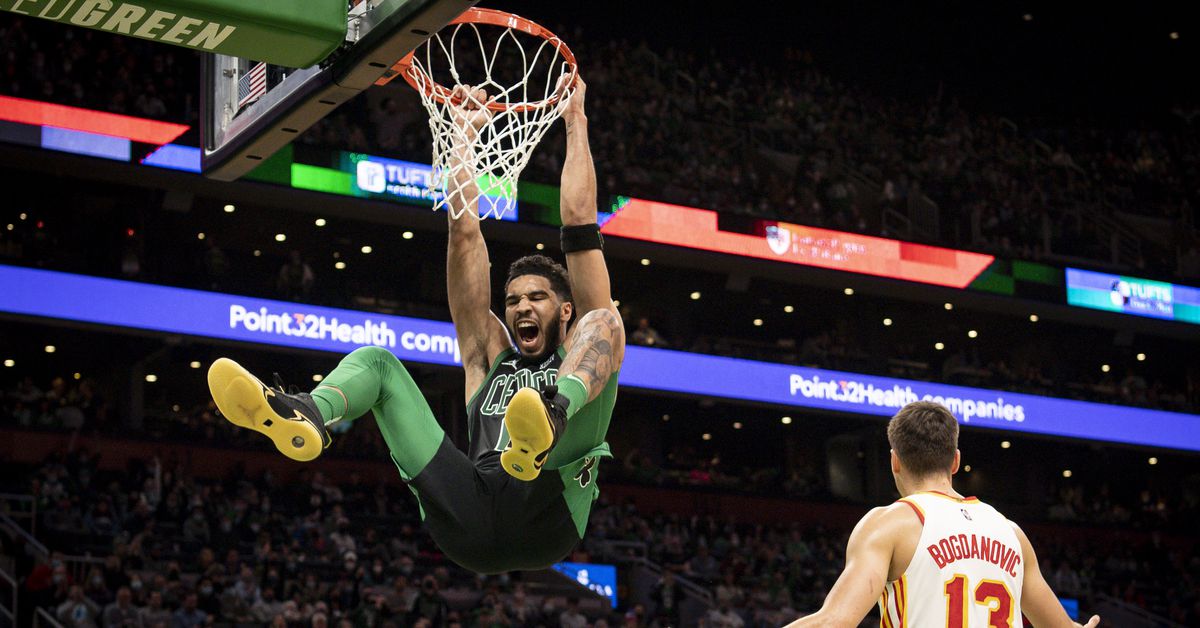 1. A few times during this win streak, things have gotten sideways for the Boston Celtics. In the last two games, that was poor first halves. As a few members of the team have said, the games against the Denver Nuggets and Atlanta Hawks are games the team would have lost earlier in the season.

Not anymore. The Celtics are now punching back. But beyond punching back, they’re taking complete control of the fight.

Remember when third quarters used to be a nightmare? This team is now coming out of the break with a renewed focus. That’s allowed them to turn around games. No more late-game scrambles just to make it a contest. This is taking control of the game and playing it on their terms.

More than anything else, that’s been the biggest change in 2022. The Celtics are playing Celtics basketball more and more often now. And that’s got them winning games.

2. Things seem to go well when Jayson Tatum gets an easy bucket early in games. This is a pretty casual cut by Tatum, but a perfect pass by Marcus Smart (more on him later!):

This play is good stuff all around. Smart pushes in transition and that allows Tatum to seal the smaller Bogdan Bogdanovic in the paint for the easy turnaround hoop:

Lately, Tatum is playing inside-outside. His finishing has been emphatic and strong. Tatum rejects the screen and the pullup here. Instead, he puts his shoulder into the big man and powers through him for the dunk:

(Note: Look at Derrick White flexing at the end of the clip. More on White later too!)

3. Because of how good he can be offensively; it sometimes goes overlooked that Jayson Tatum is an elite defender. His versatility is as much a key to Boston’s switch-everything scheme as any other player. On this play, Tatum is guarding his “natural” cover and he completely locks up Danilo Gallinari:

In the fourth quarter, Tatum gets switched onto Trae Young. Tatum should have gotten credited with a block here, but the main point is that he made this an extremely difficult attempt for Young at the rim:

4. Robert Williams could be a vacuum with the way his hands suck in the ball and how he cleans up messes. Williams’ only problem on plays like this is making sure he times it correctly to not get called for offensive goaltending:

Sometimes, it’s just about Williams putting himself in the right place at the right time:

For the season, Williams is up to 73.2% shooting from the field and 3.9 offensive rebounds per game. More than a few times per game, he bails the Celtics out when the offense gets a little wonky.

5. The other Williams is playing really well too. Grant Williams has become such a deadeye shooter that teams are now closing out on him hard. That means that Williams has to be able to take advantage and attack those closeouts. It’s not that Grant is fleet of foot, but he knows he can beat Danilo Gallinari off the bounce, and he does so before leaving it for Rob at the rim:

This is another good drive of a closeout, followed by Williams going right into the chest of Clint Capela for the finish:

6. In the third quarter, Marcus Smart took complete control of the game. First, he single-handedly caused De’Andre Hunter to pick up four fouls in a two-minute span. Then Smart was the engine that drove the Celtics attack.

Multiple times, the broadcast picked up Smart saying “C’mon let’s go!” as he got the ball after a stop and pushed in transition. He got to the line six times himself in the third period, as Boston outscored Atlanta 42-23 to take control of the game. He also had three of his seven assists during this stretch, as he helped to get Jayson Tatum (16 points in the third) and Jaylen Brown (11 points in the third) going after the break.

7. Beyond his third quarter brilliance, Marcus Smart overcame a really rough opening few minutes to put together a solid game once again. He’s done an excellent job of finding Jayson Tatum and Jaylen Brown on these quick duck-ins for easy hoops:

And when he needs to, you know Smart is going to deliver one of those Smart plays that only he can:

8. The eighth takeaway today is simply to acknowledge that the Celtics have won eight straight games. That seemed unthinkable in November and December, but as the calendar flipped to 2022, Boston has taken off.

9. Last, but certainly not least, is the newest Celtic fitting in perfectly. Derrick White has proven to be what the Celtics need off the bench. He’s quick, decisive and on the attack. His defense is excellent, and his versatility fits in with Boston’s switch-everything scheme.

White is also getting more-open looks than he got with the Spurs. He just has to knock them down, like this, to replicated what the Celtics gave up in Josh Richardson:

White is also a better natural passer than either Richardson or Dennis Schroder. That allows for quick pick-and-rolls like this, because White will put the ball where it needs to be:

And White has already learned that when in doubt, just throw it in the general vicinity of the rim and let Robert Williams take care of the rest:

10. Some are attempting to excuse away Boston’s current run as only “beating bad teams”, but that could end on Tuesday night. The Celtics will face a real challenge with the Philadelphia 76ers. It’s unknown if James Harden will make his Sixers debut or not, but Joel Embiid will be there, and he’s a handful. Boston hopes to have Daniel Theis, who has been effective against Embiid in the past, available if necessary.

Mostly, this is a chance to keep the streak going with a quality road win. Then it’s a back-to-back against the Detroit Pistons in Boston on Wednesday to close things out before the All-Star break. 10 in a row is in sight, but for now, it’s one in a row against the 76ers that the Celtics are after.