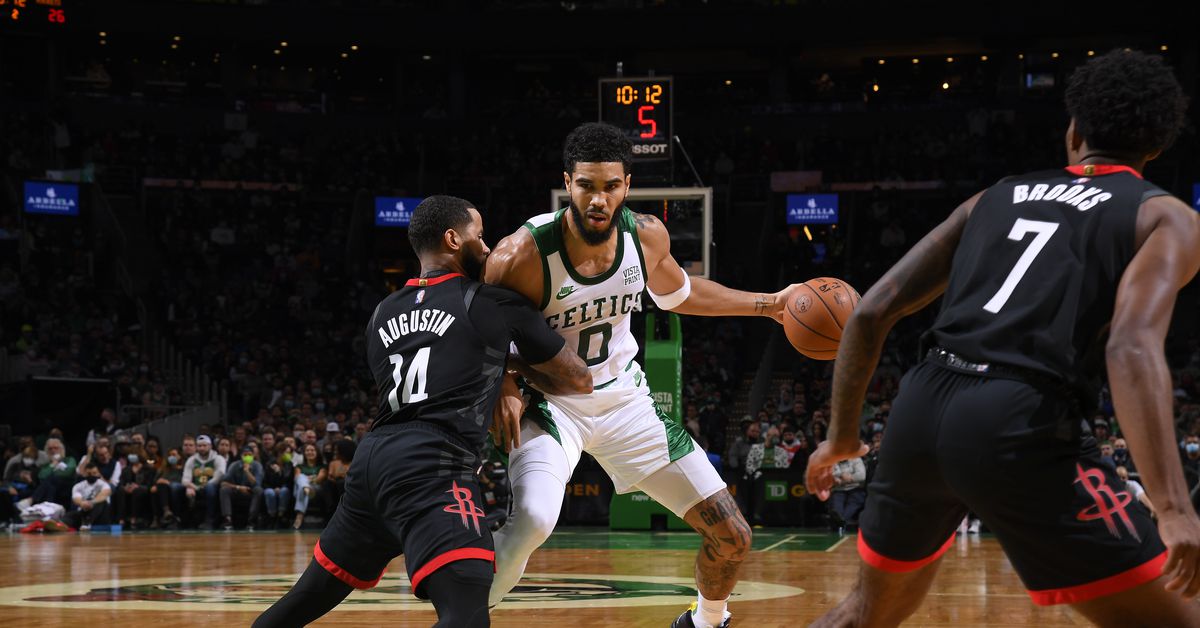 1. The 2021-22 season has been a roller coaster ride for the Boston Celtics so far. Right now, we’re at one of the fun parts. Boston has put together three consecutive wins, all at home, to run their record to 10-8 on the season. Over the last few weeks, the Celtics have also figured out their defense and pushed up to sixth-best in the NBA. Now, the offense is starting to come around and is sitting in the middle of the pack.

A pessimist will say the Celtics haven’t played anyone, and there is some truth to that. The Los Angeles Lakers are a decidedly average team, while the Oklahoma City Thunder and Houston Rockets are both bad teams. What’s missed in saying Boston hasn’t played anyone is to skip over how dominant they’ve been in those wins. Sure, the Thunder made it tight at the end, but that came when Ime Udoka emptied the bench a bit too early. The other two games were over fairly early on.

The Celtics can only play the teams in front of them. Beating the bad ones counts just as much as beating the good ones.

2. Jayson Tatum’s slump is long gone now. Tatum went for at least 30 points in his fourth consecutive game. Early in this game, the Celtics star was “in his bag” as the kids, and Brian Scalabrine, say. It started with Tatum shaking Christian Wood for this jumper:

Boston did a good job of attacking mismatches in this game. There isn’t a better one to go at than six-foot D.J. Augustin trying to check Tatum:

This was a terrific attack in transition from Tatum:

Overall, Tatum had 22 points at the half. With the Celtics blowing out the Rockets in the second half, Tatum settled into a facilitator role and got some of his teammates going. Otherwise, he likely would have cracked 40 points with ease.

3. Because Al Horford and Robert Williams (and Grant Williams off the bench) are such skilled passers from the top of the key, Ime Udoka can run some different sets. This is kind of an inverted look off an out-of-bounds play. Jayson Tatum inbounds to Rob Williams, who swings to Horford. As Horford catches the ball, Marcus Smart is screening for Tatum to make a basket cut. Both of the Rockets bigs are pulled away from the basket, and Jaylen Brown stays rooted to the corner. Easy money for Horford to Tatum is the result:

4. A quick glance at Marcus Smart’s box score probably seems like it was a “ho-hum” sort of night. But Smart is playing within himself and acting as a ball-mover better than ever right now.

Ime Udoka has been asking the Celtics to play with more pace all season. They don’t need to be fast-breaking all the time, but getting the ball up the floor while the defense is in transition is a focus. Smart does well here to push the ball to find Al Horford filling the lane:

5. Another focus for Ime Udoka has been the Celtics ball movement. From Day 1 as Boston’s coach, he’s said the team needs to share the ball better. After this game, Udoka said he’s been really happy with the process, even if bad shooting nights have messed with the results some.

The good news is that when the ball moves, everyone feels engaged and energized. This clip starts with Marcus Smart attacking the paint and kicking the ball out. As it moves, Grant Williams hits the paint for second time and the ball finds it way back to Smart for a corner three:

On this play, Jayson Tatum works off the screen from Enes Kanter. Tatum kicks to Williams, who makes the good extra pass to Romeo Langford for another corner three:

This is just pretty basketball. Al Horford finds Marcus Smart on the backdoor cut, then Smart leaves it for Dennis Schroder for the layup:

6. The big news, outside of the victory, is that Boston is getting healthy. Josh Richardson missed the game due to a non-COVID illness, but everyone else was available. Jaylen Brown was back following an eight-game absence due a hamstring issue, and Robert Williams returned after three games out due to knee soreness.

The returns from injuries come at a key time, as Boston is about to hit a road-heavy part of the schedule that features games against some of the NBA’s best teams.

7. It took Jaylen Brown a half to find his rhythm, but once he did, he looked like he didn’t miss a beat. In a 65-second stretch in the third quarter, Brown scored 10 points and turned the game into a rout. It started with a couple of free throws, followed by Brown Euro-stepping his way to the bucket:

Brown has been drilling the pullup three-pointer this season, and does so here:

If once is nice, twice is even nicer:

In all, Brown scored 19 points in 23 minutes and looked good after finding his footing.

8. Romeo Langford played his best game of the season. He scored 10 points and grabbed five rebounds, while also providing some pretty good on-ball defense. Langford is up to 42.3% on three-pointers and is shooting them with confidence like this now:

9. During his rookie year, Aaron Nesmith was an extremely slow starter. He didn’t find his shooting touch until he was several games in. Maybe a similar pattern is developing this season. The good news? Nesmith doesn’t lack for confidence. This is a great pull, just seconds after checking in the game (note the great cross-court pass from Jayson Tatum too!):

This play starts with a great block by Grant Williams at the rim and ends with Nesmith letting it fly again:

10. After cruising through three lesser opponents, the Celtics now welcome the Brooklyn Nets to Boston on Wednesday. This is a real test. Brooklyn comes in as the best team in the Eastern Conference at 13-5. Following this game, the Celtics go to San Antonio and Toronto for a tricky post-Thanksgiving road-trip. Then it’s one more at home, followed by five-game west coast swing.

That’s seven of the next nine on the road. Beating Brooklyn at home would be a great confidence builder for Boston heading into this difficult stretch.