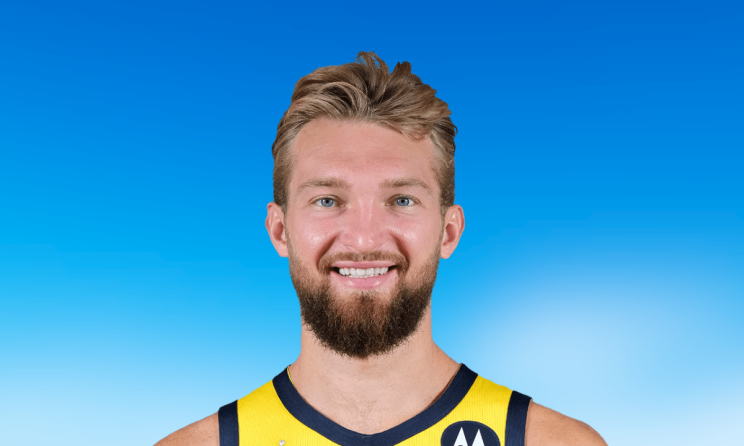 Kevin O’Connor of the Ringer reported that Domantas Sabonis wants out of Indiana. That’s what I was told by multiple league sources as well, and that it wasn’t just this season, but instead going back to last year Sabonis was looking for a change of scenery.
Source: Matt Moore @ Action Network

Scott Agness @ScottAgness
Pacers outscored 25-5 over the first 10 minutes of the 4th quarter, lose in Milwaukee (no Giannis, Middleton, Lopez, DiVincenzo, Ojeleye) 114-99.
Disappointing showing on the front end of a b2b. Sabonis led them with 16-14-5.
Up next: vs Pistons on Thurs. – 10:10 PM

Eric Nehm @eric_nehm
Domantas Sabonis is just eating the Bucks up on the glass right now. Bucks are forcing misses, but Sabonis has 3 offensive rebounds and 10 points in the quarter.
Pacers up, 79-78, with 3:25 left in the third quarter. – 9:33 PM

Justin Kubatko @jkubatko
Domantas Sabonis last night:
✅ 30 PTS
✅ 11 REB
✅ 12-17 FG
Sabonis has recorded four straight 20-point, 10-rebound games with an eFG% of at least 70%.
The only player in NBA history with a longer such streak is Wilt Chamberlain (6). pic.twitter.com/zLsczdoaVw – 9:41 AM

J. Michael Falgoust @ThisIsJMichael
Green gets to rim bc a pitch is anticipated. Keeps it for a layup. Sabonis anticipated wrong. No need to be level on the action v a non-shooter if there’s rear pursuit. A drop would eliminate the drive #PacersWarriors – 9:22 PM

Austin Kent @AustinKent
Alright, if Steph gets the record, they get to bring Domantas home with them, NBA Street-style. – 9:09 PM

Tony East @TEastNBA
Pacers lead 84-80 after 3 quarters. They survived an early quarter Warriors run to hold their lead. Sabonis has 25 and 8 and is driving most of the Pacers success, but good defense from Duarte, Brissett, and Brogdon have been big for the team as well. – 8:59 PM

Anthony Chiang @Anthony_Chiang
Kyle Lowry was among the nominees for the East Player of Week award that just went to Indiana’s Domantas Sabonis. – 3:39 PM

Scott Agness @ScottAgness
Pacers center Domantas Sabonis named Eastern Conference Player of the Week.
He averaged 25 points, 10.5 rebounds and 6 assists her game while shooting 75% — and helped the Pacers to a 3-0 week.
They got back to playing through him & it shows. Second time he’s earned this honor. – 3:37 PM

Tony East @TEastNBA
After averaging 25-10-6 last week and leading the Pacers to a 3-0 record, Domantas Sabonis has been named the Eastern Conference player of the week. LeBron wins out west. pic.twitter.com/q5hkDzjlMs – 3:34 PM

Gerald Bourguet @GeraldBourguet
With all the Sabonis-Suns talk today, a reminder that such a deal seems pretty unlikely compared to a few other Pacers targets that make more sense. Wrote about all of that last week: bit.ly/3lI1Q9h – 1:30 PM

Marc Stein: You have to remember that they just hired Rick Carlisle to a four-year deal worth nearly 30 mil. Rick is not a tear-it-down-and-rebuild with youth coach. So are the Pacers really going to just trade both (Myles Turner and Domantas Sabonis) and strip this thing down to Chris Duarte and youth. I think if you check around the league, you get a lot of skepticism for that kind of approach -via marcstein.substack.com / December 16, 2021

Sabonis’ value around the league seems mixed, but there are several teams in the playoff picture, such as the Blazers and Kings, team executives have pointed to as potential landing spots. The Trail Blazers have Jusuf Nurkic and Robert Covington available. Sacramento has weighed trade interest for each of Buddy Hield, Marvin Bagley and Harrison Barnes dating back to last season’s trade deadline, and Carlisle is known to have an affinity for Barnes from their time together in Dallas. Rival executives believe only rookie standout Chris Duarte and fellow first year Isaiah Jackson are untouchable in Indiana. Malcolm Brogdon cannot be traded this season following a contract extension in October. “Sabonis, Turner, Warren, LeVert all can be had at the right price,” said another assistant general manager. -via Bleacher Report / December 14, 2021