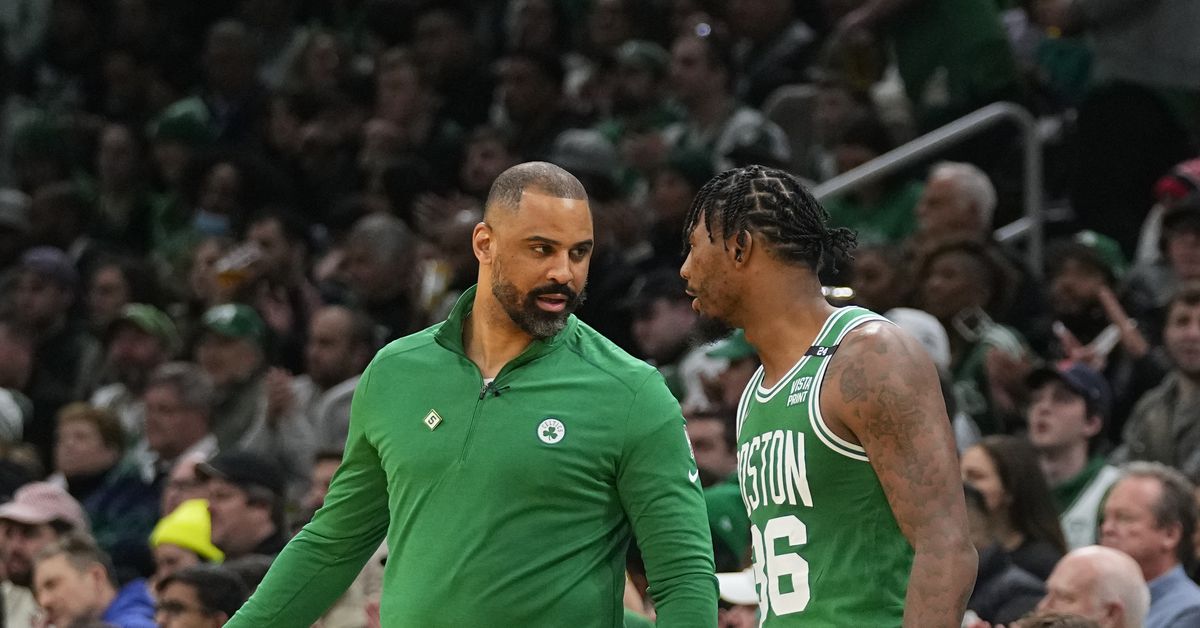 Following practice on Thursday, Celtics head coach Ime Udoka offered updates on Marcus Smart’s status for Game 3 on Saturday in Milwaukee. Smart was forced to depart Game 1 after sustaining multiple thigh contusions as well as a shoulder stinger, and missed Game 2 as a result. With the series tied 1-1 going into Milwaukee, Boston will need all hands on deck to try split these road games.

“He’s getting better, getting some work in now … we’ll know more tomorrow,” said Udoka during media availability. “I don’t think he’s restricted in every movement, some side to side, getting shots up … getting out and sprinting he might be more restricted than other basketball movements.”

With their lead point guard sidelined, Udoka and the Celtics have turned to mid-season acquisition Derrick White to step into a starting role. In his first playoff start for Boston, White was scoreless on 0-6 shooting (0-4 from three) along with four rebounds, six assists, two turnovers and a steal. While he had a goose egg from the field, White was tied with Grant Williams for a team high plus-minus of +22 in Boston’s 109-86 win on Tuesday night.

“One of our main penetrate and kick guys, plays with great pace,” said Udoka on White, “then defensively, having that versatility to not lose a ton when Marcus goes out … people want to look at shots only … we’re not focused on that … when those fall it’ll be an added bonus.”

Between their time together with the Spurs and the 2019 FIBA World Cup team, Udoka is no stranger to White and what he brings to a team. Boston’s head coach said that there was minimal adjustments in terms of scheme with Smart out, citing White’s size and defensive capabilities as a major factor. “We don’t even need Marcus honestly,” joked Udoka as Marcus Smart looked on and waited for his own interview.

“Nah we really don’t to be honest. But it’s nice to have him,” quipped Marcus Smart when asked if the Celtics needed Udoka. On his recovering quad injury, Smart said that he’s feeling “better. Better than I was. Some of the swelling has gone down, still dealing with some … just taking it day by day.”

On White filling in while he’s been recovering, Smart said his teammate is “A savvy veteran guard who’s been around and knows how to handle himself in the playoffs. He didn’t shoot the ball … but he made plays in other ways … his shot’s going to fall and he’s going to continue to be himself, making everyone better.”

It was gutting for Smart to be sidelined for Game 2, but he knew that he was hurt bad enough that he needed to give his body time to heal. “I was very antsy that whole day, couldn’t sleep … if I’m going to miss a playoff game, something has to be really wrong with me,” said Smart.

One slightly-alarming wrinkle is this was the same injury that bothered Smart earlier in the season, and in the same exact spot. However, Smart said he had an MRI as a precaution; that came back clean, and the injury was just aggravated.

Smart also said that there was fluid in his knee in addition to swelling that was restricting his movement. It was mainly making it difficult for him to hunker down into his defensive stance. “It’s hard to go out there and plays,” Smart admitted.

The Celtics are preparing for Giannis Antetokounmpo to have a bounce back performance at home, and Udoka said the team will need to respond accordingly.

“Antetokounmpo is going to be aggressive, said Udoka, “guarding him one-on-one, he’s going to adjust to that … we have to be ready for that in Game 3.” Grant Williams was praised following his efforts in containing Giannis during Game 2, and on 31 possessions Williams only allowed 8 points on 4-10 shooting without committing a foul.

“We can slide him right in and not really miss a beat when he comes in for Al,” said Udoka on Williams and his ability to slot in for Al Horford. “Understanding how teams are guarding him … and keeping it simple … sometimes he tries to do a little too much, but he’s improved at that as well.”

Smart echoed the same sentiment about Horford and Williams in their defense on Antetokounmpo, saying the two bigs “have done a PHENOMENAL job” in containing and limiting the Greak Freak.

With the days of rest in between Games 2 and 3, Udoka said the Celtics need to make the most of it with resting their bodies and game planning for their Saturday matchup. “You have to take advantage of these last breaks that you have before it goes to every other day,” said Udoka.

On his status heading into Saturday, Smart said there was a “strong likelihood that I’ll be back for Game 3.” But, he knows he cannot rush back and not give himself the necessary time to heal properly. “When I come back, I’m coming back to be me.”