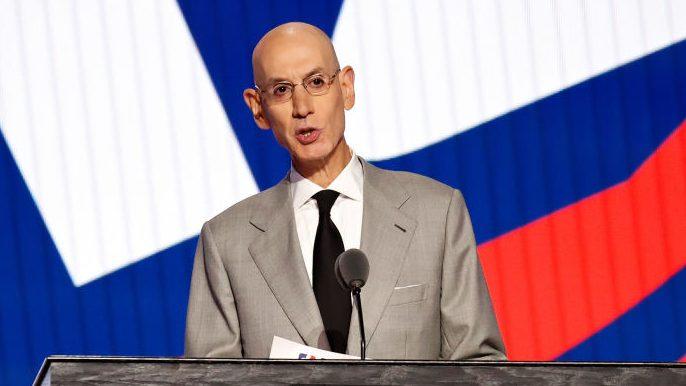 NBA Commissioner Adam Silver sounded a lot like Kevin Durant: He wants to see Kyrie Irving back on the court and what the Brooklyn Nets will look like with everyone healthy.

“I hope that Kyrie sort of — despite how strongly he feels about the vaccination, ultimately decides to get vaccinated because I’d love to see him play basketball this season,” Silver said Monday in his annual press conference at the start of the season. “And I’d love to see the Brooklyn Nets have their full complement of players on the floor.”

Vaccination rates around the league and the high-profile holdouts — specifically Irving — were the focus of multiple questions for Silver. He tried to keep the spin positive, noting that 96% of NBA players are now vaccinated, a number expected to climb.

The questions, however, focused on the holdouts. Specifically, on Irving, the Brooklyn star who is unvaccinated, which means he can’t play in home games because of New York’s vaccine mandate, which led to the Nets to say Irving would not play for them until he was “fully eligible.” There are other prominent vaccine holdouts among players — Bradley Beal in Washington, Jonathan Isaac in Orlando, and others — but they will not have to miss games because their cities don’t have the mandate that New York and other cities do.

“I’m not sure if fair is the right way to approach it because there’s nothing fair about this virus,” Silver said. “It’s indiscriminate in terms of who it impacts, and I think it’s perfectly appropriate that New York and other cities have passed laws that require people who both work and visit arenas to be vaccinated. That seems to be a responsible public health decision made by those locales, and those are the circumstances in which the Nets find themselves operating.

“I accept that. I think that we understand as a league we have to play the cards that are dealt, just in the same way there are variations from market to market.”

Irving and vaccinations were just one of the topics to come up. Here are some highlights of other things Silver discussed.

• Silver has been a big proponent of a mid-season tournament and said it is still being discussed with the owners and players union, even though he admitted there is not great enthusiasm from players for the event.

“I’ll call it an in-season tournament right now because I’m not sure precisely where it would fall, and those conversations have been ongoing in order to create new competition,” Silver said. “Not only would we have to convince the 30 teams that it made sense, but of course the players and their union, as well.

“We’re in the process still of formulating what we think would be the best proposal for all concerned. I will say I’ve learned a lot from European soccer. I think we could play other competitions throughout the season without taking anything away from the Larry O’Brien Trophy.”

• Expansion is not off the table for the NBA, but it’s not a priority for the league now, Silver said.

“Nothing new, though, to report on expansion,” Silver said. “As I’ve said before, we want to be fully through the pandemic and know that we’re back operating on all cylinders before we seriously start to look out into the future. We will. I mean, I don’t think there’s any doubt that at some point we’ll take a very serious look at potential expansion.”

When asked about expansion to Seattle specifically, Silver said Seattle would get strong consideration if the NBA expands.

• With buildings being full of fans again, Silver confirmed the NBA is estimating $10 billion in revenue for this year. He said last season, the NBA was 35% below its pre-COVID revenue projections, primarily due to buildings being empty.

• In discussing the NBA’s response to tampering, some have suggested the NBA’s stance is hypocritical because it benefits from that free agency buzz.

“Well, sure, we enjoy the coverage around free agency. It’s going to come regardless of sort of the timing and where players choose to go,” Silver responded to that. “From a league standpoint, we’re just trying to create a level playing field… You know, our teams want us to enforce these rules because our teams want to know that if they follow them, they’re not going to be at a competitive disadvantage to other teams in the league.”

Check out stories from our NBA preview series

Predicting the 2021-22 Eastern Conference standings, playoffs Timberwolves’ front-office shakeup leaves a sour taste for woebegone… Will Cavaliers’ bigs block opponents or each other?