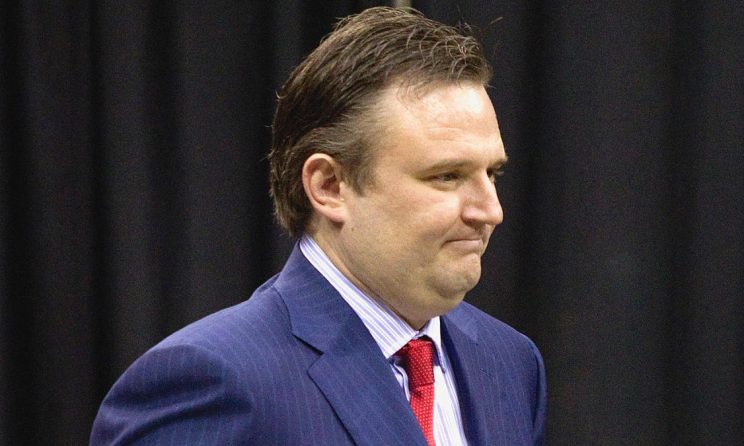 During the latter part of his tenure with the Houston Rockets, new Philadelphia 76ers president of basketball operations Daryl Morey became well-known for employing an extreme style of small-ball that featured guards and forwards, but not a traditional center. Morey went all in on this style, and he put an exclamation point on it when he traded Houston’s starting center, Clint Capela, prior to the trade deadline last season.

Given his history, many were wondering if Morey would look to replicate the small-ball style that he used in Houston with the Sixers; a team that is currently constructed in a manner that is basically the polar opposite of a small-ball squad. During his introductory press conference with the Sixers this week, Morey addressed this topic and made it clear that he is adaptable, and not a one-trick pony.

“We were trying to build the best team around our talents in Houston,” Morey said of his use of small-ball with the Rockets. “But here, Doc [Rivers] is gonna take the talent we have and use them to the best of their ability… The goal isn’t to shoot three-pointers. The goal is to win. You can score on offense in a whole bunch of different ways.

In Houston in recent years, Morey didn’t utilize a traditional big man. In Philadelphia, he inherited one of the best in the NBA in Joel Embiid, and Morey made it clear that he is extremely excited about the opportunity to work with Embiid. Though Morey’s recent Rockets teams didn’t utilize a traditional big, it’s worth pointing out that previous iterations of his teams did. He first Rockets teams featured Yao Ming as the main man in the middle, and in 2013 he signed Dwight Howard in free agency while the star center was still near the peak of his powers. This shows that he is not patently anti-big man, as some have suggested.

“Joel is a dominant, dominant big man,” Morey said of Embiid. “I’m excited to get back to that. I worked with Yao Ming. We got very close in Houston with Yao Ming and I think we can go all the way with Joel… It doesn’t take much to look at when Joel is on the floor and he’s healthy and he’s been in here twice a day for quite a while, he’s very focused and motivated. This is an unbelievable defensive team and the fact that he’s an extremely good offensive player, Joel is the kind of player you win championships with if you look back through NBA history.”

To hammer home how he feels about Embiid, Morey used a common hypothetical question that he was often on the receiving end of in Houston.

“I used to get the question in Houston which was like ‘What would you do if you had Shaq?’ My answer was ‘I would give Shaq the ball 100 times a game,'” Morey said. “Joel is a talent on both ends.”

Sure, Morey could have just been trying to say all the right things publicly on his first day, but he was really overly effusive in his praise of Embiid. After going all-in on small-ball, and falling short of winning an NBA title, it’s entirely possible that Morey is eager for a change in style.

As a good executive, Morey will obviously do his due diligence and listen to offers. A recent report even suggests that Philadelphia will pursue Rockets star James Harden over the offseason. While the Sixers may pursue Harden, a deal seems somewhat unlikely. There’s been no indication that Houston is ready to move on from Harden. Plus, in order to acquire a player of Harden’s caliber, the Sixers would likely have to part with either Embiid or Ben Simmons, and both Morey and Rivers have made it abundantly clear that they believe that the duo of Embiid and Simmons can win at the highest level.

Even if the Sixers did trade for Harden, that doesn’t automatically mean that small-ball would be coming with him. The Sixers could look to pair Harden and Embiid in order to form a dynamic inside-outside duo. This is what Morey tried to do in Houston when he acquired Howard in 2013. Things didn’t work out for the Rockets then, but that doesn’t mean a similar approach wouldn’t work in Philadelphia.

Some aspects of Houston’s style under Morey will assuredly make their way to Philadelphia. You can expect the Sixers to add more shooting over the offseason; an area that they lacked last season, and would have had to have been addressed regardless of who was calling the shots. You can also expect the team’s pace to increase, something that Doc Rivers alluded to at his introductory press conference. But while there will be some similarities, don’t expect the Sixers under Morey to be an exact replica of recent Rockets teams.