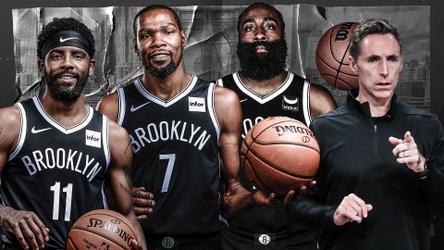 With the beginning of the 2021 NBA preseason just days away, here are four Nets questions that need answers during these exhibition games.

Dominating the buzz during media day was none other than Kyrie Irving, who as of right now will not be able to play in home games nor road games at Staples Center or Madison Square Garden. This is a sizeable chunk of the schedule and a potentially huge hit to Brooklyn’s season and championship hopes.

Nothing is certain as of right now, with Irving still able to get vaccinated or some sort of exemption between now and the season’s start. Preseason will offer a day-to-day countdown to a decision point, and numerous opportunities to get updates on this unfolding situation.

It could also serve as a preview of what this Nets team looks like without Irving.

Who fills out the rotation?

Assuming Brooklyn’s top eight guys are Irving, James Harden, Kevin Durant, Joe Harris, Blake Griffin, Patty Mills, Nic Claxton and Bruce Brown, who fills out the remaining two spots in a typical 10-man unit, or cracks into the top eight altogether? Head coach Steve Nash is sure to use the preseason as a proving ground for his depth pieces, be it the aging veterans or unproven prospects.

LaMarcus Aldridge appears to be the next man up given his skillset, years of performance and place in Brooklyn’s rotation for a part of last season. But he hasn’t played high-level basketball since retiring last April due to a heart scare.

There’s also a number of multifaceted wing/forward options between DeAndre’ Bembry, James Johnson and Sekou Doumbouya. Can Jevon Carter get play as a defensive specialist? What about rookies like Cam Thomas or David Duke Jr.? Preseason will help clear these rotation questions up.

How good is the young core?

Chances are, come the regular season and especially the playoffs, we may not see as much of Brooklyn’s 22-and-under crowd playing meaningful minutes. While there are sure to be exceptions, especially in Claxton and Thomas, preseason may offer our only glimpse into the Nets’ youth movement.

This may not seem like a big deal in a championship-or-bust season, but superteams eventually die out. With few draft assets, that leaves the long-term future somewhat in the hands of Day’Ron Sharpe, Doumbouya, Duke Jr., and Kessler Edwards, as well as the two previously mentioned.

Given stars like Durant and Harden don’t need an extensive preseason to get up to speed, it makes for a terrific exhibition ground for these younger players, one more indicative of future success than Vegas Summer League.

How does James Harden look?

Harden came into last season in non-peak physical condition, which carried through his trade request until he arrived in Brooklyn. Even as a Net, he had to work his way back in the early days, and still dealt with nagging injuries after he fell back in the groove.

On media day, Harden looked much more toned and athletic, even citing his physique as a major point of focus this offseason. Though he won’t be giving it 100% and won’t see much action outside the first halves, preseason will be a first glimpse at the new-and-improved Harden, one Nets fans are undoubtedly excited to see.