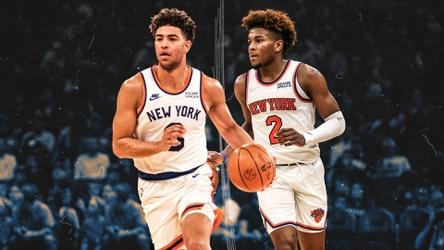 As expected under a Tom Thibodeau team seeking to make noise in the playoffs, this season was a struggle for the Knicks’ rookies to find minutes. That is until the COVID-19 pandemic began raging across the league, causing hundreds of players to miss time due to health and safety protocols.

The revolving door of positive and negative tests, along with some injuries, opened the window for Quentin Grimes and Miles McBride, the Knicks’ top two picks in 2021, to get an opportunity. Fans have long awaited seeing these two after positive Summer League and preseason appearances.

After they received a little more than spot minutes in the early part of the year, they’re now key cogs for a decimated rotation, in between their own COVID-induced gaps. What Knicks fans have seen from the pair thus far suggests they perhaps should be here to stay, but has their play been enough to secure them minutes with the roster at full health, and who should be benched if so?

One thing that was immediately evident about Grimes and McBride was their high-level defense. In their minutes this past month, they’ve proven capable on the defensive end on the NBA stage, no easy feat for first-year guys. They flow through the schemes well, keep in their stance and defend with constant energy.

Unfortunately, we haven’t seen them truly tested. Grimes fared well against the reigning champion Milwaukee Bucks but hasn’t played a real NBA team since. McBride had some good moments individually against Stephen Curry and Shai Gilgeous-Alexander, but wasn’t a primary defender against either.

Still, it’s their defensive aptitude that makes them capable of filling any lineup and moving up the depth chart. Neither has been caught with their pants down in their limited minutes, which can’t be said for a number of starters this season.

Offense was the bigger question surrounding these two, and though early results are mixed they provide for a measure of optimism.

Grimes may be the least hesitant shooter on the roster. In his last five games, Grimes is attempting nine threes a night, leading the team in per-36 minute attempts by a solid margin. He only shot 35 percent in that span and 37.5 percent on the season, but it’s clear from watching how gifted a shooter he is. His release is consistently fundamental with great lift and form, making every miss feel like a glitch in the simulation.

Grimes’ attacking game needs work, with things looking choppy after his second dribble. Thankfully, his court vision allows him to create something for a teammate if he’s chased off the line, but he’ll be a fully formed threat once the mid-range shot and inside finishing develop. We’ve yet to see much out of Grimes as a pick-and-roll handler, despite his success from that realm in college.

McBride’s shooting sample size is much smaller than Grimes’, both due to playing time and playstyle. There have been some flashes of serious creation on that end, with the makings of a reliable step-back jumper and some dynamic finishing at the rim. There have also been a couple of stinkers, but McBride’s defense is so good it’s hard to care.

It’s tough to see McBride being the impact offensive weapon Grimes will be, but many of the core staples of an effective player on that end are there. He should be a good shooter and penetrator, once the handle is fleshed out. However, he does appear capable of being more of a go-to one-on-one lockdown guy, especially against guards.

This is all fun conjecture based on a handful of promising games, but real decisions are coming Thibodeau’s way. At some point, the team should be relatively healthy, and back to a ten-man rotation that originally didn’t feature the rooks.

Grimes has outplayed Evan Fournier, headline free agent signing and second-highest paid member of the Knicks, on multiple occasions. McBride is the best defensive option at the one position on the roster, period. There’s really no case for putting either back on the bench.

That leaves a question of who gets benched in place of them?

Derrick Rose is out for an extended period after having surgery, leaving some minutes for McBride. Kemba Walker’s removal from the rotation appears to be over, so that can’t be relied on going forward.

The Knicks are unlikely to bench any of their wings–Fournier, RJ Barrett or Alec Burks–in place of Grimes. Moving away from one of their core centers to play Obi Toppin at the five opens up a spot, but may leave Grimes as the stretch four in that unit.

There’s also the trade route, in which a Knicks franchise committed to the rebuild leans into their productive rookies and makes space for them by dealing a veteran.

Luckily for the rookies, this pandemic doesn’t appear to be slowing down and injuries will always be a factor. With that in mind, it’s possible they maintain positions in the rotation without any friction.

Knicks fans should hope so. Grimes and McBride have delivered some of the more exhilarating performances of the season and bring a youthful spark every time they check in. Maybe it’s time we see more of them.