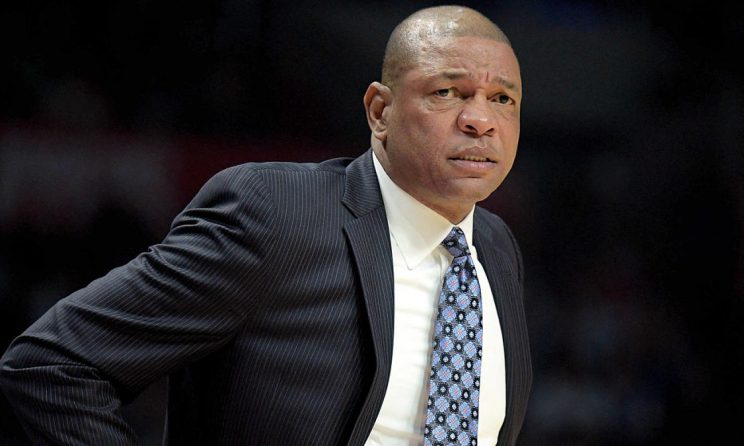 After an underwhelming 2019-20 campaign, the Philadelphia 76ers made a plethora of changes over the offseason, perhaps none more major than replacing Brett Brown with Doc Rivers as the team’s head coach. Entering his first season with the Sixers, Rivers faces high expectations, and he will look to recreate the success that he enjoyed with the Boston Celtics in 2008 when he coached them to an NBA title.

It’s tough to tell exactly what to expect from Rivers in Year 1 in Philadelphia, especially since the season will be one of the most unique in league history given the ongoing COVID-19 pandemic. However, Rivers has provided some clues when it comes to his approach to start the season. Here’s a look at some things we can expect to see from Rivers’ 76ers, based on comments he has made recently to media members.

More pick-and-rolls, and a faster pace

One thing that we’ll see right away from the Rivers-led Sixers is the utilization of more pick-and-roll action. For seven seasons under Brett Brown, the Sixers largely eschewed the pick-and-roll as they relied much more heavily on cuts and dribble handoffs. Last season, only the Houston Rockets had a ball-handler score less out of the pick-and-roll than the Sixers did, per NBA.com, and the Rockets relied very heavily on transition and isolation.

Since the Sixers didn’t use the pick-and-roll much under Brown, it stands to reason that they also didn’t use their best two players — Joel Embiid and Ben Simmons — together in that action often. That will change this season — Rivers plans to run those plays much more in general, and specifically with his two stars.

“I guarantee you we’ll run more pick-and-rolls, and I guarantee you’ll see more pick-and-rolls with Ben and Joel in them,” Rivers said during a recent session with media members. “But I like a lot of the stuff they ran in the past, too. They had some pretty good movement stuff. We want to make sure that, because of this shortened preseason, shortened training camp and quick first game, that we don’t try to do too much. We want to make them as comfortable as possible.”

While the Sixers rarely used the pick-and-roll last season, Rivers’ Clippers were on the other end of the spectrum, as the 31.8 points per game they generated out of the action was in the top five in the league. It’s clearly an action that Rivers likes and is comfortable with, and in turn we’ll certainly see thems run more of it this season.

In addition to running more pick-and-rolls, Rivers also wants to increase Philadelphia’s pace of play. The Sixers finished 19th in pace last season (101.3), while Rivers’ Clippers finished ninth (104). Rivers will likely aim to have the Sixers finish much closer to the top 10 this season.

While the Sixers’ depth chart looks a lot different than it did last season, a couple of familiar faces — Shake Milton and Furkan Korkmaz — figure to have large reserve roles under Rivers, who has a history of having Sixth Man of the Year winners on his teams. In fact, five Clippers players won the award under Rivers: Jamal Crawford in 2014 and 2016, Lou Williams in 2018 and 2019 and Montrezl Harrell last season. This shows Rivers puts an emphasis on reserve production, and that’s something that will continue in Philadelphia. In Milton, Rivers sees a player who could be his spark off the bench, much like Crawford and Williams were in L.A.

“I’ve had a lot of luck with really good second unit guards,” Rivers said. “I think we have that. I think Shake, No. 1, right when I took the job, Shake has been where my focus has been. I’ve got to let him play even freer, which is crazy. I will say when I told him that he was very happy with that news. I told him that I would hold him far more accountable defensively than I did with Jamal [Crawford] and Lou [Williams] for sure, but Shake has that ability in him.”

Given Milton’s skill set and Rivers’ history with his reserve guards, Milton could be in line for a big season. In addition to Milton, Rivers is also high on Korkmaz, who has seen inconsistent playing time during his three seasons with the Sixers thus far.

“Furkan has another ability in him and using [him and Milton] as a combination of scorers coming off the bench would be terrific for us,” Rivers said. “I love what [Korkmaz] can do … He can shoot the ball, he can dribble the ball, can play pick-and-roll, has a very high basketball IQ, still young. I think Furkan will be a very big piece to what we do this year.”

The rotation will likely be a fluid situation early in the season, but it certainly sounds like Milton and Korkmaz will both be on the receiving end of ample on-court opportunity.

A more varied role for Harris

Tobias Harris, who still has four years remaining on the $180 million contract he signed with the Sixers last offseason, played for Rivers on the Clippers during the ’18-19 season before he was traded to Philadelphia. He put up career-best numbers during that time as he averaged 20.9 points per game on 50 percent shooting from the field and 43 percent from long range, and the Sixers are hoping that Rivers will again be able to get the best out of him.

Rivers is a big fan of Harris’ versatility, and his ability to play multiple positions — something he’s going to tap into in Philly.

“I love coaching him,” Rivers said of Harris. “I like that he’s a multi-positional player. He’s a big three, he’s a quick four. That’s how we used him a lot in L.A. We kept moving him back and forth to different spots. I love his shot. He has a great in-between game, which is sometimes lost in today’s game. And I think he’s a terrific straight-line driver.”

In order to open things up offensively for Harris, who averaged just 15.8 points per game in the postseason, Rivers plans to use him more in pick-and-roll scenarios; something that he had success with in L.A.

“In L.A., we put him [Harris] in more pick-and-rolls than I think he’s ever been in in his entire life, and we had some success with that,” Rivers said. “Pick-and-rolls to me are all about combinations. You put the two combinations together, you create problems defensively for the other team, and Tobias can do that.”

Rivers also wants to see Harris make quicker decisions with the ball in his hands.

“First thing we’ve gotta get him back to being is a quick-decision player,” Rivers said. “I told him I saw him dribbling way too much. Tobias is so darn skilled going downhill left and right. We need to get back to taking advantage of that.”

With Embiid and Al Horford both playing in Philadelphia’s frontcourt last season, Harris was forced to spend the majority of his time at the three. However, now that Horford has been traded and the Sixers are clearly putting an emphasis on floor-spacing, Harris could also end up spending some significant time at the four spot.

Less pressure on Simmons to shoot from the outside

While there are many eager to see Ben Simmons add an outside shot to his otherwise stellar skill set, Rivers isn’t in that camp. While speaking with media members, Rivers made it clear that he isn’t going to be putting pressure on Simmons to shoot. Instead, Rivers will be pressuring him to make the right basketball play, time and again.

“I don’t care about Ben’s shooting as much as so many other people seem to care about it,” Rivers said. “I care that he’s a great player. I’m going to let him play. I’m going to give him the keys and let him be free and play. If he takes no shots, I’m fine. If he takes 10 3s, I’m fine. If he gets to the line 15 times, I’m fine. Ben is brilliant enough for me to allow him to play and not get in his way and try to cloud his head up with a bunch of crap. It’s about winning, and that’s what I want Ben to focus on, how to make each other better and win.”

In time, the hope is that Simmons will continue to expand his range and become increasingly comfortable with shooting from distance, but he won’t be pressured to do so immediately by his new coach.