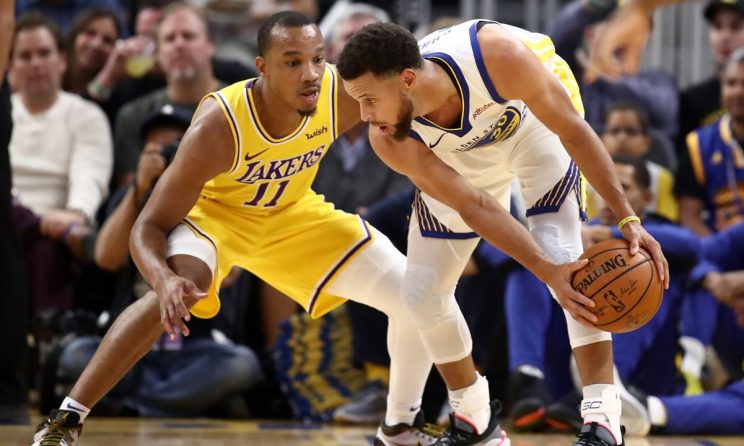 One of the assets the Warriors have at their disposal in free agency is the $5.7 million taxpayer mid-level exception.

Is it possible they use it on Avery Bradley?

Yahoo Sources: Potential free agent Avery Bradley to be courted by Golden State, Milwaukee and several contenders in attempt to lure him away from the Los Angeles Lakers.

The No. 19 overall pick from the 2010 draft was described as a “potential free agent” because it’s unclear if he will exercise his 2020-21 player option.

Lakers guard Avery Bradley tells @TheAthleticNBA @Stadium he is changing representation and plans to sign with agent Charles Briscoe. He is evaluating whether to decline his $5M player option.

If news surfaces in the coming days that Bradley will enter free agency, it’s all but certain he will get an offer from somebody above the $5 million he is scheduled to earn this season.

After the conclusion of the NBA draft Wednesday night, the Los Angeles Lakers reportedly will finalize a trade with the Oklahoma City Thunder that will send Dennis Schröder to the defending champions.

Perhaps that transaction has resulted in Bradley coming to the conclusion that leaving the Lakers is in his best interest.

The soon-to-be 30-year-old (his birthday is Nov. 26) averaged 8.6 points over 49 games (44 starts) last year, while shooting over 36 percent from 3-point range. He opted not to play in the Orlando bubble when the season resumed in late July.

“As committed to my Lakers teammates and the organization as I am, I ultimately play basketball for my family,” Bradley told ESPN’s Adrian Wojnarowski. “And so, at a time like this, I can’t imagine making any decision that might put my family’s health and well-being at even the slightest risk.

“As promised also, I will use this time away to focus on the formation of projects to help strengthen my communities.”

RELATED: How CP3 to Suns could impact Warriors’ trade exception

If he signs with the Warriors, it is safe to assume he will come off the bench. But there definitely would be opportunities for him, Steph Curry and Klay Thompson to be on the court at the same time.