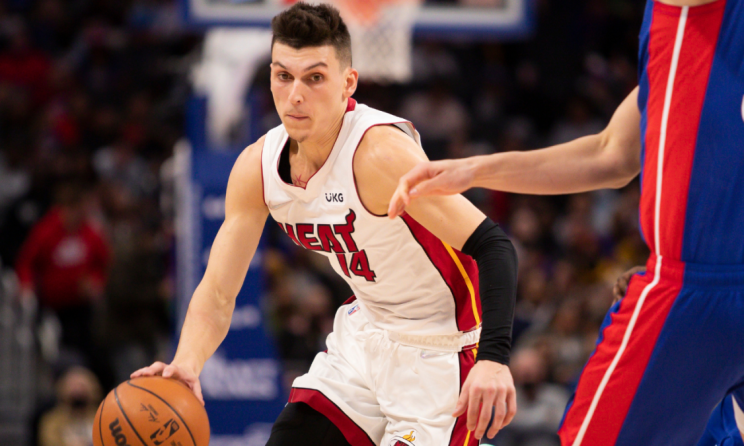 The Miami Heat have gotten out to a fast start. Winners of five of their last six games, they sit at 12-6 for the season, good enough for the Eastern Conference’s second spot, just behind Brooklyn. Their latest victory came courtesy of a fourth-quarter blitz against Detroit, with the Heat outscoring the Pistons by 17 in the final period to win 100-92 on Tuesday.

As has been the case all season, Tyler Herro was spectacular, scoring 14 points in that fourth quarter en route to 31 for the night. He added eight rebounds and three assists while shooting 12-of-21 from the field, including 4-of-8 from 3, where he’s over 40 percent for the season.

The Heat have a superstar in Jimmy Butler, an All-Star in Bam Adebayo and a Hall of Fame point guard in Kyle Lowry, who has freed up Butler to return to a score-first mentality. And yet, Herro, who has been a legitimate go-to option since his rookie season, is often the guy getting the biggest buckets.

One of the early favorites for Sixth Man of the Year, Herro ranks second in the league in total fourth-quarter points (113), trailing only MVP candidate DeMar DeRozan’s 126.

But he’s more than a shooter and scorer. Herro can lead an offense. He’s a terrific pick-and-roll initiator who, at just 21 years old, can dominate a game on his own. When Herro is on the floor this season without Butler and Adebayo, the Heat are beating opponents by 15.8 points per 100 possessions, per Cleaning the Glass. When Butler, Adebayo and Lowry are out, Herro-led lineups are sporting a plus-34.6 net rating.

Small samples notwithstanding, those are noteworthy numbers.

They say the best trades are often the ones you don’t make. That’s starting to feel like the case with Herro, whose name popped up in trade rumors almost all of last season and throughout the summer. That doesn’t mean the Heat wanted to move him. They just did not have any other young, needle-moving assets outside of Adebayo, who is pretty much untouchable; if they wanted to get in on the big deals, Herro had to be included.

The Heat wouldn’t include him in a trade for Lowry at last year’s deadline, which worked out as they landed Lowry anyway this past summer. They perhaps would’ve let Herro go in a trade for James Harden, but reports indicated the Heat didn’t have the draft capital to entice the Rockets, who eventually moved Harden to Brooklyn.

This past offseason, Ethan Skolnick, who has reported on the Heat for years, stated there was a “75 percent chance” the Heat would trade Herro. It didn’t happen. Who knows if that’s because the right deal didn’t present itself or because the Heat truly doubled down on their Herro stock; either way, Miami is winning big and looking like a contender now and in the future, with Herro and Adebayo at the core of both timelines.