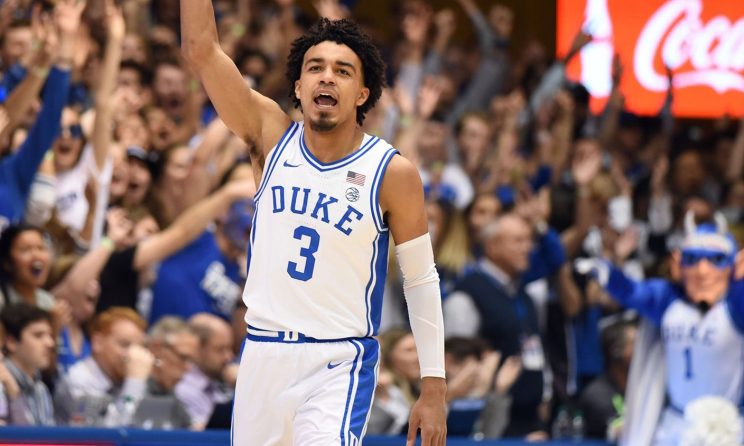 Looking at the 2020 NBA draft prospects, there might not be a player that has been more closely scrutinized than Tre Jones. Such is life when you’re the point guard at Duke.

A look at Jones’ two years in Durham is a study in contrasts. In his first season, he played Ringo in a Fab Four freshman class that included Zion Williamson, RJ Barrett and Cam Reddish. (Apologies to Joey Baker for not being included in that group.) Oftentimes, Jones would defer to his more prominent teammates to the point of disappearing offensively in games.

Jones was the lone member of that unit to return to school for a sophomore season. The Minnesota native emerged as the team’s leader and most complete player en route to earning ACC Player of the Year and Defensive Player of the Year honors. Only Shane Battier and Malcolm Brogdon have accomplished that double this century.

But how does Jones’ game translate to the NBA? Let’s examine his strengths and weaknesses:

Excellent defender: Jones earned that Defensive Player of the Year award on merit. The best example of his prowess on defense came in his last college game, a 13-point win over rival North Carolina. In that contest, Jones placed the clamps on likely lottery pick Cole Anthony. The UNC star scored just 9 points on 4 of 14 shooting while adding only three assists in 39 minutes.

You can count the number of on-ball defenders who were better than Jones in the NCAA last season on one hand. That said, the 6-foot-3 guard will have to continue to develop strength if he’s going to disrupt NBA-caliber point guards on a consistent basis.

Embraces the moment: As mentioned above, the affable Jones willingly played facilitator in his freshman season. But in his second season, Mike Krzyzewski and the Blue Devils counted on Jones to take the team’s big shots. Obviously, one could point to the game-tying buzzer beater in Duke’s other game with North Carolina last season as evidence of that. But there were countless times in 2020 when Jones read the moment and made a play when his team needed it.

Jones will not be a primary offensive option in the NBA, but his defense has the opportunity to keep him on the floor at the end of games. He won’t be afraid to take and make big shots in those instances.

Shooting: Tre is actually the second Jones to make his way through Duke in recent years. His brother Tyus, you may recall, starred for the 2015 national champions alongside Jahlil Okafor. Tyus displayed a great deal of offensive weapons in his lone season at Duke. The younger Jones is slightly more limited on the offensive side of the ball, specifically when comparing the two as shooters.

Tre shot over 42 percent from the field as a sophomore, a tick up from his freshman campaign. But where he really improved was as a three-point shooter, going from 26.2 point to 36.1 percent. Jones will need to continue to improve that part of his game, because NBA coaches are going to help off him initially and force him to hit open shots.

To his credit, Jones is a good free throw shooter (over 75 percent from the foul line in both seasons at Duke), and he gets better in that department late in games.

Ball handling:  A willing passer and good decision maker, Jones is the type of player you want to play alongside. But he’s not a point guard that can get anywhere he wants off the dribble. He’ll need screens in order to consistently get into the paint as an NBA player.

His handle is also a little loose for a player of his size. That didn’t cost him much in college, but it will be a different story next season.

Chances are that Jones will likely fall to the bottom part of the draft’s first round, and that might be a blessing in disguise for the 20-year old. He’ll never be the type of player that can change a franchise. But Jones has the potential to be a fit for a good team like the Sixers, initially as an eighth or ninth man. One could see Jones providing capable defense while taking some minutes as a lead ball handler when Ben Simmons needs a rest. He’d also provide the potential for giving the Sixers a ridiculous shutdown lineup of Jones, Simmons, Matisse Thybulle, Joel Embiid and any other player you’d like.

In a best-case scenario, the Duke star becomes Kyle Lowry, a tenacious defender that runs his team and does enough offensively to be a factor. But if he doesn’t become a better offensive player, he might be relegated to NBA journeyman. I’d bet Jones ends up as a solid contributor to playoff teams for the better part of the next decade.