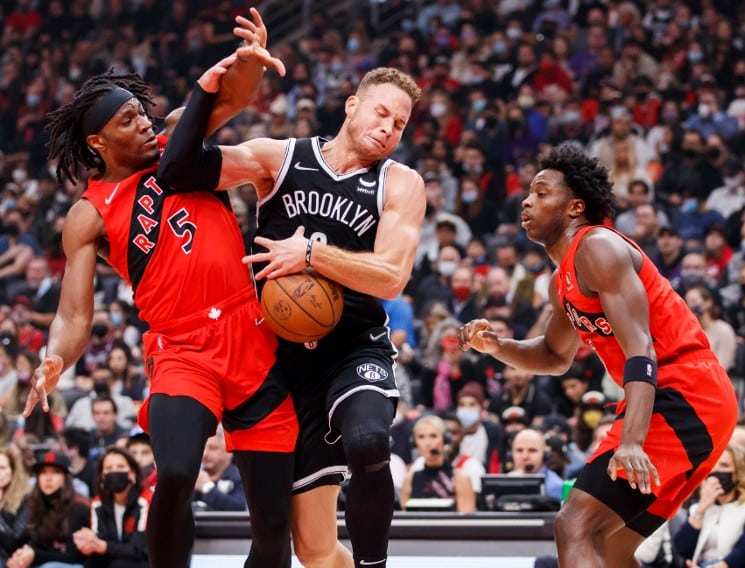 In Tuesday night’s Eastern Conference rematch, the Toronto Raptors (13-14) are facing off versus the Brooklyn Nets (19-8) at Barclays Center. Which contender will snap the other team’s two-game winning streak?

Leading into tonight’s intraconference contest, the Raptors are 12-15 against the spread in the 2021-22 NBA season, while the Nets are 11-15-1 against the spread. This game will air live at 7:30 p.m. ET through NBA League Pass and YES Network. Referring to Land of Basketball’s database, during the regular season all-time, these two Eastern Conference contenders have played one another 101 times. Toronto is 58-43 versus Brooklyn. Nonetheless, in the previous three head-to-head meetings, the Nets are 2-1 against them.

Plus, on Nov. 7, Brooklyn defeated Toronto with a final score of 116-103. In other news, the top story for tonight’s game is centered on a COVID-19 outbreak on the Nets. Today, the team has a total of eight players listed on the injury report. Due to the virus, LaMarcus Aldridge, James Johnson, Javon Carter and DeAndre’ Bembry were added to the protocol list, alongside Paul Millsap. To make matters worse, forward Kevin Durant is now on the injury report because of his ankle. By the time this game starts, the odds may shift in favor of Toronto.

Raptors in Brooklyn to face the Nets tonight. https://t.co/u0UdRf6o7U

Additionally, in the Raptors’ 124-101 home win over the Kings, center Chris Boucher led his team in scoring, closing out his night with 17 points in 22 minutes on the court. Forwards Scottie Barnes and Pascal Siakim each finished their performances with 16 points. In their 23-point blowout victory, the Raptors outscored the Kings 68 to 50 in the key. Toronto also had a total of 10 steals as well.

Based on ESPN’s Basketball Power Index, the Nets have a 77.9% probability of winning.

Meanwhile, on Saturday, in the Nets’ 116-104 road win over the Pistons, forward Kevin Durant scored a season-high 51 points in 41 minutes of action. Guard Patty Mills contributed 18 points, 3.0 rebounds and 5.0 assists in 35 minutes, too. However, the Nets were outscored 46 to 38 in the free throw lane. Durant’s teammates have to elevate their offensive performances.

Even without James Harden, one player should never feel forced to have to carry a team like this. In the fourth quarter alone, Brooklyn outscored Detroit 30 to 13. After yet another convincing win on the road, the Nets are 11-3 away, 8-5 at home and 3-9-1 ATS at home this season. They have won seven out of their past 10 games.

For noteworthy betting trends, the Raptors are 4-1 ATS in their previous five performances this season. On top of that trend, the team is 4-1 straight up in their last five games played. Next, Toronto is 4-2 ATS in the team’s past six games versus Brooklyn. And, the Raptors are 16-4 SU in their previous 20 matches against the Nets. The total has also gone under in four of their last five games versus Eastern Conference opponents.

As for the Nets, the total has gone under in five of their past five games. Also, the team is 0-5 ATS in their previous five contests at Barclays Center. To add to these betting statistics, the Nets are 5-1 ATS in their last six matches versus Atlantic Division opponents. Considering this aforementioned data, contemplate picking the Nets to win, but the Raptors will likely cover the spread. Before wagering, read through our handicap betting guide here at Basketball Insiders.

Pick the Nets to win, the Raptors will cover the spread and the total will go under 217. Brooklyn is a eight-point favorite at home with BetUS.