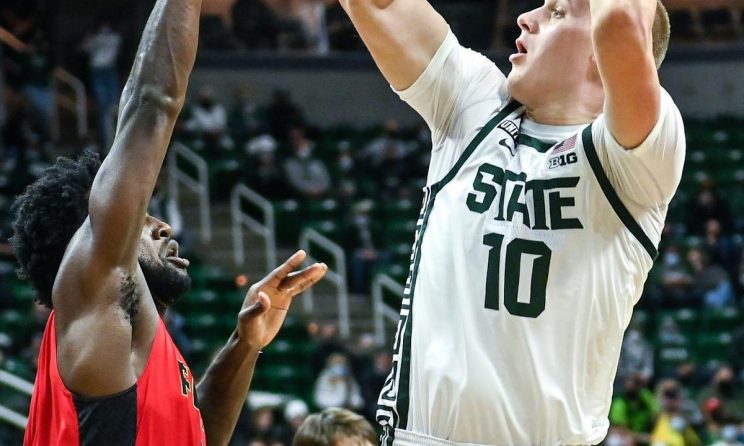 EAST LANSING — Tom Izzo continues to search for his starting lineup with the regular-season opener less than a week away.

That will be one of his big decision going into Michigan State basketball’s final tune-up Thursday as the Spartans host Grand Valley State in an exhibition at Breslin Center. Tipoff is 7 p.m., and the game will be streamed on BTN-Plus.

Izzo, after Wednesday’s practice, said one starting spot remains open for him to choose between junior captain Malik Hall and senior Joey Hauser at forward.

Michigan State’s Joey Hauser scores against Ferris State during the first half on Wednesday, Oct. 27, 2021, at the Breslin Center in East Lansing.

Hauser started last week’s 92-58 exhibition-opening win over Ferris State, finishing with nine points, six rebounds and four assists in 19-plus minutes. Hall came off the bench and played 20-plus minutes between the wing and small forward, getting eight points and five rebounds.

“I gotta still come up with a true starting lineup, which I think I got most of,” Izzo said. “The X-factors are Joey and Malik, because we’re trying to play Malik at two positions. We could bring him off the bench, we could not. That will be determined probably in the next week.”

That points to Izzo starting Tyson Walker at point guard, as he did against the Bulldogs, and bringing sophomore A.J. Hoggard coming off the bench. The duo combined for 11 points, nine assists and five steals in their first show at the position that Izzo felt MSU struggled with most a year ago in going 15-13 and barely making the NCAA tournament with a late season run.

The Spartans’ other starters are expected to be freshman Max Christie at shooting guard, and seniors Gabe Brown and Marcus Bingham Jr. on the wing and in the paint, respectively.

Michigan State’s Malik Hall, center, is fouled by Ferris State’s Reece Hazelton, left, during the first half on Wednesday, Oct. 27, 2021, at the Breslin Center in East Lansing.

MSU, unranked in the preseason USA TODAY top 25, opens Tuesday against No. 3 Kansas in the Champions Classic at Madison Square Garden in New York. Tipoff is 7 p.m. on ESPN.

“I’ve looked at a little Kansas all summer, just because you do,” Izzo said. “But we’re still trying to focus in and get a template and how we want to handle each game.”

Izzo said he was pleased with how he and his staff used the Ferris State game to work on substitution patterns. Hoggard, Hall and junior forward Julius Marble all came off the bench in a wave a little less than 4 minutes into the game, while freshman combo guard Jaden Akins entered at the 6-minute mark. That likely will be his nine-man rotation, though sophomore forward Mady Sissoko was the 10th man against the Bulldogs and played 10 minutes. Freshman guard Pierre Brooks also played in the first half and got nine-plus minutes, most of which came after the game was decided.

“There’s eight or nine guys that are gonna play probably in regular games. So finding which one is seven, eight and nine or eight, nine and 10 is going to be a big key,” Izzo said. “So these games are important. We’re trying to make them important.”

It will be the first game of the fall for Grand Valley State, which went 12-7 under 18th-year coach Ric Wesley in 2020-21. The Lakers return all five starters, each of whom scored in double figures last season, and Isaac Gassman (Illinois State) and Deleon Brown (Colorado) are among five Division I transfers on GVSU’s roster.

“Grand Valley, I think, is going to be one of the better Division II teams that we’ve played,” Izzo said.

Izzo said MSU has been healthy with its starters, but the Spartans did lose an experienced walk-on Jason Whitens for the season with a torn ACL he suffered against Ferris State. The coach said Whitens is expected to undergo surgery Friday.

The 6-5, 210-pound guard from Powers, who transferred to MSU after four seasons at Western Michigan, got hurt with a little more than 6 minutes to play after making his debut at 9:24 of the second half. Whitens chased down three rebounds but missed his two free-throw chances before getting injured.

Whitens started 18 of his 19 games last season with the Broncos, averaging 5.4 points and 3.5 rebounds in 23.3 minutes per game. The Academic All-Mid-American Conference selection shot 47.2%, and Izzo said during media day last month he expected Whitens to potentially get some minutes.