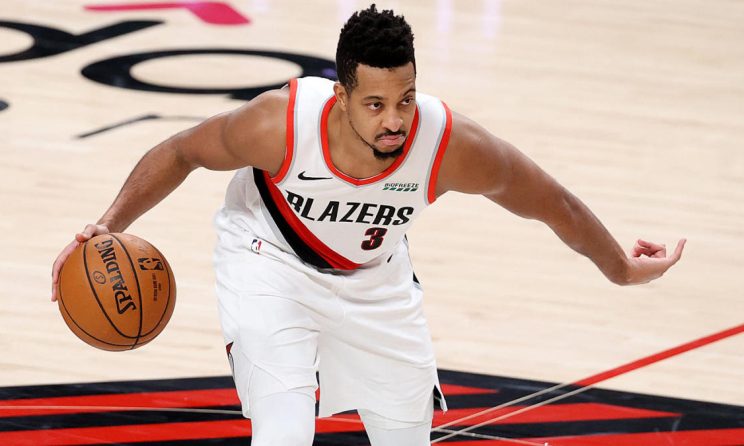 The biggest question across the NBA leading up to the trade deadline on Feb. 10 is if the Philadelphia 76ers are (finally) going to trade malcontent All-Star forward Ben Simmons, or if the standoff between Simmons and the Sixers will continue into the offseason. Simmons hasn’t played in a single game for Philadelphia this season after requesting a trade over the summer, but the Sixers want to make sure that they get good value back whenever they ultimately move the former top overall pick.

Despite the fact that a lot of fans in Philadelphia would’ve liked to have seen Simmons traded already, Sixers president of basketball operations Daryl Morey has made it clear that he plans to employ a patient approach to the process. Back in October, he warned that the process of finding a new NBA home for Simmons could take “four years” (the entirety of the time remaining on Simmons’ current contract).

At the time, many assumed that this was hyperbole and that the Sixers would ultimately be compelled to take the best available offer prior to the deadline. However, during a recent radio appearance, Morey pumped the brakes on such speculation by stating that a deal getting done in the next few weeks was “less likely than likely,” though he noted that if Simmons remained on the roster past the deadline, it wouldn’t be because of a lack of effort on the organization’s end. Anything an executive says in public needs to be taken with a grain of salt, but there certainly seems to be at least a possibility that the three-time All-Star isn’t moved by Feb. 10.

While moving Simmons is Philadelphia’s clearest path to improving the roster around MVP candidate Joel Embiid, it isn’t the only path. Here’s a look at three trades that don’t include Simmons that the Sixers could make in the name of immediate improvement prior to the deadline.

It certainly appears as though the duo of Damian Lillard and CJ McCollum has run its course in Portland. The roster is in need of a shakeup, and since the organization and Lillard appear to be tied at the hip (at least publicly), it is likely McCollum will be ultimately relocated. In this situation, the Blazers would get a solid perimeter player in Harris to play alongside Lillard and Norman Powell, and they also land a first-round pick in the deal.

In Philadelphia, McCollum would provide the Sixers with a backcourt player capable of consistently generating his own offense — something they desperately need. He’s the type of guy that you can give the ball to in late-game situations, or when the shot clock is running low, and he can make something happen. Plus, he would likely prove to be a much better fit alongside Embiid than Harris is. This trade would leave the Sixers thin at the power forward position, but that issue could be addressed separately. For Philadelphia, this deal would basically amount to trading Harris’ contract for McCollum’s, as both expire in 2024. That seems like it would probably be a worthwhile tradeoff.

The Rockets are in the midst of a rebuild, and thus Gordon doesn’t really fit their timeline moving forward. With this deal, the Rockets would get out from under Gordon’s contract (Green’s deal is non-guaranteed for next season), a solid young shooter in Korkmaz on a team-friendly deal through 2024, and a second-round pick to add to their war chest.

In Gordon, the Sixers would get a legitimate floor spacer and offensive option, albeit one that is probably past his prime. Nonetheless, Gordon is still averaging 14.8 points per game this season while shooting a scorching 45 percent from long-range — second in the entire NBA behind only P.J. Tucker. The Sixers can always use added shooting and scoring around Embiid, and Gordon would provide that.

Dragic is completely out of the rotation in Toronto, so a trade seems inevitable. In this scenario, the Raptors would get back Danny Green, who won a title with the team in 2019 and whose contract is non-guaranteed for next season, along with two serviceable floor-spacers in Korkmaz and Niang, and a second-round draft pick from Philadelphia. Not a bad return for a player that isn’t contributing at all. Watanabe would have to be included to make the salaries work.

The Sixers have long needed a veteran point guard capable of generating his own offense when needed, and Dragic would provide that. He projects as a solid complement to Embiid, and a reliable backup to have behind second-year guard Tyrese Maxey. He and Maxey could potentially even play together at times. And hey, if it doesn’t work out for Philadelphia, there will be no long-term damage caused by the deal as Dragic is set for unrestricted free agency after the season.