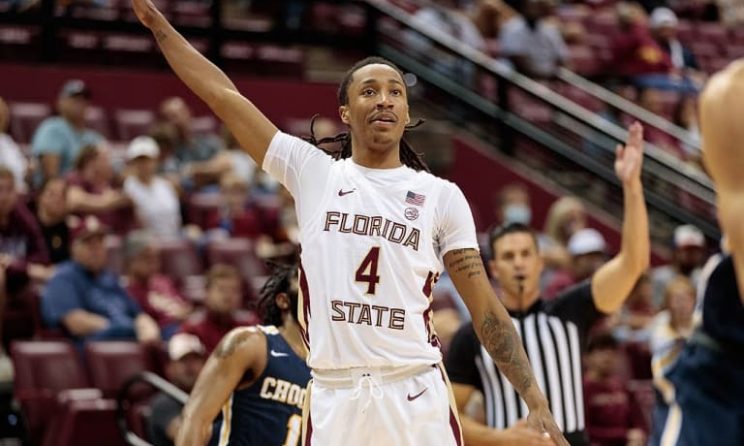 The run to another NCAA Tournament and another potential berth in the Sweet 16 (and beyond) starts tonight for the Florida State men’s basketball team.

The No. 20 Seminoles open with Penn at the Civic Center at 9 p.m. (ACC Network). And they do it with a startlingly different roster than the one they had a season ago.

Florida State lost five of its top seven scorers from last year’s Sweet 16 squad, including an early favorite for the NBA Rookie of the Year in Scottie Barnes.

“Are we ready? Probably not,” FSU head coach Leonard Hamilton said. “We have a core of experienced guys returning, but the way our system is put together and the way we play, we need the full sum of all our parts working in order for us to be successful.

“And we’re not at that point yet. We have about five or six first-year players that we’re depending on.”

Houston transfer Caleb Mills is expected to be one of the FSU men’s basketball team’s top scorers this season. (Logan Stanford/Special to Warchant)

Key among those newcomers is Houston transfer Caleb Mills, who figures to be one of the Seminoles’ leading scorers this season.

He delivered multiple 20-point performances for the Cougars as a freshman and was the conference’s preseason player of the year before transferring early on a year ago.

Joining him will be freshmen Matthew Cleveland and Jalen Warley, who were both mighty impressive in the Seminoles’ two easy exhibition wins.

Warley had 11 points (on a perfect 5-of-5 from the floor), seven assists and four steals in 19 minutes in the 102-55 win over Florida College. Cleveland added 13 points.

Again, though, it was against an NAIA school in a game that didn’t count.

And although he hasn’t seen his newcomers in a game like this yet, Hamilton said he’s been pleased with what he’s seen from them so far. On the defensive end.

“That’s been one of the most pleasant surprises that we’ve had,” the Seminoles’ veteran head coach said. “Caleb Mills and Jalen Warley, Cam Fletcher, Matthew Cleveland, John Butler, those guys have exceeded my expectations. From an energy standpoint, from a willingness standpoint, to fly around and be active and aggressive, I’ve been very pleasantly surprised.”

Those young players will get a test tonight.

Pennsylvania is typically one of the better teams in the Ivy League.

The Quakers won the 2018 conference championship and advanced to the NCAA Tournament. Then in 2019, they went 19-12 overall, which included a win over then-reigning national champion Villanova. They were 16-12 in 2020.

And then last year, the Ivy League canceled its season, meaning tonight will be Penn’s first basketball game in 18 months.

Hamilton has a pretty good idea of what to expect from head coach Steve Donahue’s team.

“They should be a lot more efficient than we are at this point, so this is the kind of challenge we need to get the season started.”

Jordan Dingle is Penn’s best player. He’s actually one of the few Quakers on the roster who has made any significant impact at the college level. He was the Ivy League Rookie of the Year in 2020, averaging 13.5 points per game and scoring at least 20 points five different times as a freshman.

Discuss this with fans on Warchant’s Seminole Hoops message board