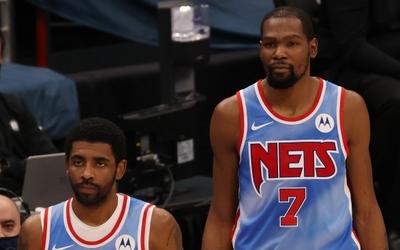 Nets head coach Steve Nash told reporters on a Zoom video conference call Friday that the team has a few reinforcements back for Saturday’s Christmas game at the Los Angeles Lakers. Kevin Durant and Kyrie Irving, who headline Brooklyn’s players still in health and safety protocols, do not appear to be among them.

While James Harden and Nic Claxton are set to come back, DeAndre Bembry will not play. If any Nets — such as Durant — test out of protocols, there is a chance they could make their return Monday at the Los Angeles Clippers.

Irving, however, is out of the question. He needs to get his legs back under him first, Nash explained.

“He’s still in protocols and he needs ramp up, so we won’t see Kyrie on this trip,” Nash said. “I honestly don’t know what the rule change will be our how it’ll affect us, but I guess anything’s possible and we’ll see when the time comes. But right now, I couldn’t answer that.”

Nash added that Blake Griffin‘s knee is fine after a bout of tightness stemming from last Saturday’s 100-93 loss to the Orlando Magic. However, nine Brooklyn players remain quarantined entering a prime-time matchup between the Eastern Conference-leading Nets (21-9) and sub-.500 Lakers (16-17).

“I mean, we’ve only been allowed to do some … work for a couple days now,” Nash said. “Most of the guys have had just basically little workouts, just with the coach and themselves. (Friday) we were able to have a little bit of a practice, where we did some technical things and actually got up and down (the court) a little bit.

“These guys haven’t been able to get up and down, so it’s important — I think — that they got a little bit in their legs today before playing an NBA game (Saturday). But you can’t, obviously, overdo it as well because they have to try to play (Saturday). So we tried to walk that line the best we could and we’ll see what we have in the tank (Saturday).”