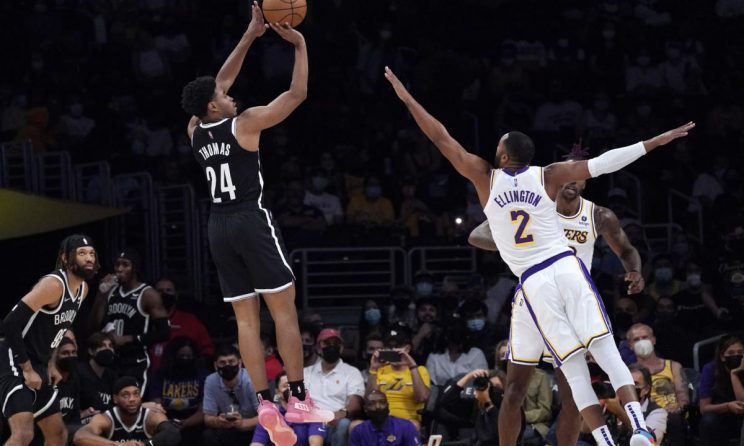 Cameron Thomas on Sunday produced a game-high 21 points to lead the Brooklyn Nets to a 123-97 win over the Los Angeles Lakers to open up the preseason.

Thomas shot 7-of-14 from the field in 22 minutes of work as the Nets picked up the win without Kevin Durant, James Harden and Kyrie Irving. He went 1-of-3 from 3-point range while converting on 6-of-7 from the free-throw line.

“Cam can score,” Nets head coach Steve Nash said. “He can get to his shot and make shots, and he hit some tonight. In general, (I’m) just happy with the level of transfer from training camp. The guys, I’ve said it before, did a good job of locking in this week and it was a good transfer to tonight so I’m pleased, overall.”

Without their Big 3, the contest gave Thomas the opportunity to log heavy minutes on the court. He seemingly continued his strong momentum from the Las Vegas Summer League, in which he was named co-MVP after averaging 27 points, two assists, 1.8 rebounds and 1.2 steals.

He entered training camp vowing to earn playing time in the rotation. With such a star-studded roster of veterans, Thomas could have a difficult time seeing the floor in the regular season but he vowed not to back down from the challenge.

Thomas feels as though he has had a smooth transition to this point.

“It’s the first time in an NBA system so I’m learning on the fly,” Thomas said. “I’m a rookie playing with all vets so they already know all of the different terminologies. I’m learning as I go. I feel like I really haven’t struggled. Of course, I’ve had some mishaps but you’re learning.”

Thomas proved to be an effective scorer in college and that has carried over into the preseason. He did the majority of his work in the midrange on Sunday and proved to be highly efficient in that area as the Lakers seemingly left it open for him.

The 27th overall pick could emerge as a potential sleeper this year if he can crack the rotation. He could give the Nets a strong scoring punch off the bench in certain situations given his offensive ability. He certainly showed what he is capable of versus the Lakers.