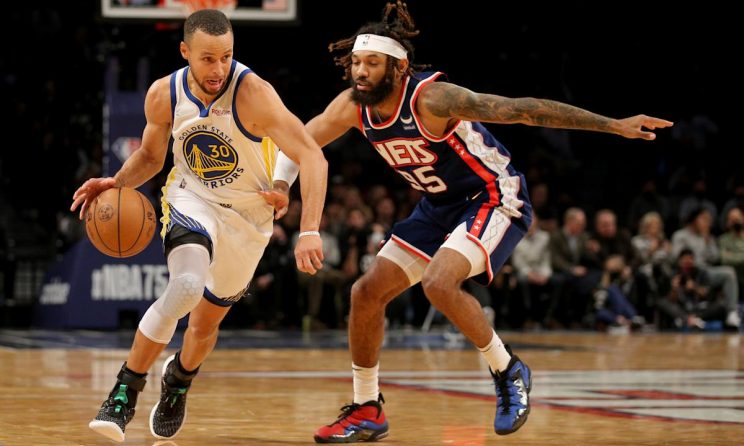 If Tuesday was an NBA Finals preview, then go ahead and crown the Golden State Warriors.

After a scorching first half of back-and-forth basketball against the Brooklyn Nets, the Warriors cruised in the third quarter in route to a 117-99 win. In a battle of two the NBA’s best teams, the Warriors walked away from this round with a decisive knockout.

Kevin Durant and Stephen Curry put on show befit of the dueling superstars in a sizzling first quarter that saw the former teammates each score 12 points. Curry connected on his first four 3-point attempts while Durant countered with an inside-outside attack in leading Brooklyn to a 34-31 lead.

But from there, the Brooklyn stage belonged to Curry. The 2020-21 scoring champ who trailed only Durant in scoring average entering Tuesday made up ground with a 37-point effort alongside seven rebounds, five assists and two steals. He connected on 12-of-19 field-goal attempts, including a 9-of-14 effort from 3-point distance. It was vintage Steph.

The game looked up for grabs through two quarters. But after the Warriors closed the first half with an 8-3 run capped by a buzzer-beating 3-pointer from Andrew Wiggins, they slammed the door shut with a 35-18 third-quarter run.

By the time the extended their fourth-quarter lead beyond 20 points, Nets coach Steve Nash waved the white flag, leaving Durant and James Harden on the bench to watch helplessly as the Warriors ran away.

Perhaps most promising for Golden State is that Tuesday’s win wasn’t simply the Stephen Curry show. The Warriors sharpshooter left the third quarter with 7:00 remaining after picking up his fourth foul with Golden State leading, 78-65. The Warriors responded with stifling defense and a 20-11 run in his absence to finish the stanza with a 98-86 edge. The fourth quarter was simply a formality from there.

After his hot start, the night added up to disappointment for Durant, who finished with 19 points, five rebounds and three assists while shooting 6-of-19 from the field. Harden led the Nets with 24 points that included a 10-of-11 effort from the free throw line. It wasn’t nearly enough to stay competitive.

Brooklyn won the forced turnover margin by a decisive 22-12 margin. But Golden State was so superior in every other facet of the game, that it didn’t matter.

The Warriors improved to an NBA-best 12-2 with the win. They got there without the services of five-time All-Star Klay Thompson and 2020 No. 2 pick James Wiseman, both of whom are expected to return from injury before the second half of the season. So far, so good in Golden State.

The Nets, meanwhile, fall to 10-5 without the promise of the return of their missing All-Star Kyrie Irving. And while it’s far too early glean too much from the results of one regular-season game, it’s clear they have some work to do to compete with the NBA’s best.