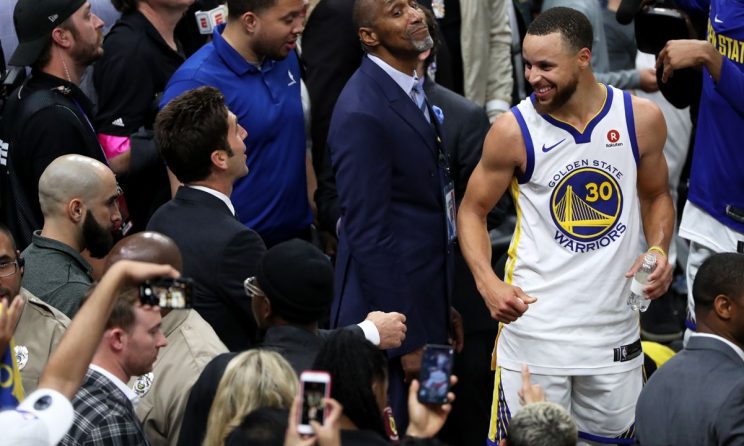 The 2020 NBA Draft takes place in less than two weeks and no one, probably not even the Warriors, knows how the first few selections will play out.

The Warriors have been linked to just about every top prospect, including Anthony Edwards, James Wiseman and Deni Avdija.

So, what should the Warriors do with the No. 2 overall draft pick?

Steph Curry was asked who he thought would be a good fit for the Warriors during in Instagram Live session hosted by LetsGoWarriors earlier this week.

“Probably need some size,” Curry said. “But at the end of the day, it’s different when you have a pick like that trying to integrate him into the team we’re bringing back and the excitement we have coming off the long, long layover, so yeah, stay tuned.”

It appears the beginning of Curry’s answer was cut off due to technical issues on the feed, but we can still look into the first thing he said.

Assuming the Warriors don’t pull off a blockbuster trade before the draft, they will head into the 2020-21 NBA season with Curry, Klay Thompson, Andrew Wiggins and Draymond Green as four of their five starters.

If Curry wants size, the logical fit with the No. 2 pick would be Wiseman, who stands at 7-foot-1. The Memphis product likely could step in from Day 1 and start at center for the Warriors.

Unless they add a veteran center during free agency or through a trade, Marquese Chriss or Kevon Looney would start at center right now. So it’s not out of the question for the Warriors to select Wiseman.

Curry wants the Warriors to add size, but general manager Bob Myers might be leaning towards taking a wing early in the draft.