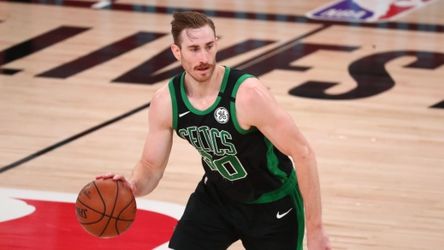 Something to keep an eye on once we find out when NBA teams can start making trades: some within the Pacers organization continue to have interest in trading for Celtics’ Gordon Hayward, per SNY sources.

It’s unknown what Boston would want in return for Hayward — or if the club is even open to moving him.

In an NBC Sports podcast in June, the Indianapolis Star noted that Hayward would be a player of interest for the Pacers in the offseason.

Hayward, who starred at Butler, can become a free agent by opting out of the final year of his deal, worth roughly $34 million. It’s hard to see Hayward opting out of his deal without the assurance of a long-term extension in place.

Why does this matter for the Knicks and Nets? As SNY has reported, teams have kept an eye on Indiana as a possible trading partner since last offseason.

Last summer, several teams inquired with the Pacers about Myles Turner trades before and after the NBA Draft, and came away with the impression that it would take a significant offer to land him.

ESPN reported prior to the start of free agency that the Pacers flat-out rejected offers at the draft. The Indianapolis Star reported before the NBA Draft that Turner wouldn’t be moved.

This offseason, the intrigue around the Pacers will continue because the team has $58 million in 2021-22 salary committed to Turner, Domantas Sabonis and Malcolm Brogdon.

Opposing teams are keeping an eye on the situation in Indy because the club will likely have to commit significant money to Victor Oladipo in the summer of 2021 if it wants to keep him.

The Pacers will be able to exceed the cap to sign Oladipo. But it would take a significant financial commitment from Indy to keep the foursome of Oladipo, Sabonis, Brogdon and Turner intact.

ESPN reported that the Pacers and Oladipo had talks about an extension before the season but concluded it was best to table the talks.

Per SNY sources, at one point in the extension talk between the club and Oladipo, the idea of a four-year extension for around $80 million was broached. Discussions about an extension didn’t progress much from there, sources said.

The Knicks have long considered themselves well-positioned to trade for a star who is made available on the market, as one front office member said back in April “it’s the best path for us.” They have the draft capital and significant cap flexibility.

Some in the organization see Oladipo as a strong fit with the team, but it is unclear how top decision makers view a trade for him. He will become a free agent after the 2020-21 season.

As for Brooklyn, they also have young assets that are on team-friendly deals. So a trade for a third star, to go along with Kevin Durant and Kyrie Irving, might be possible if GM Sean Marks is looking for one.