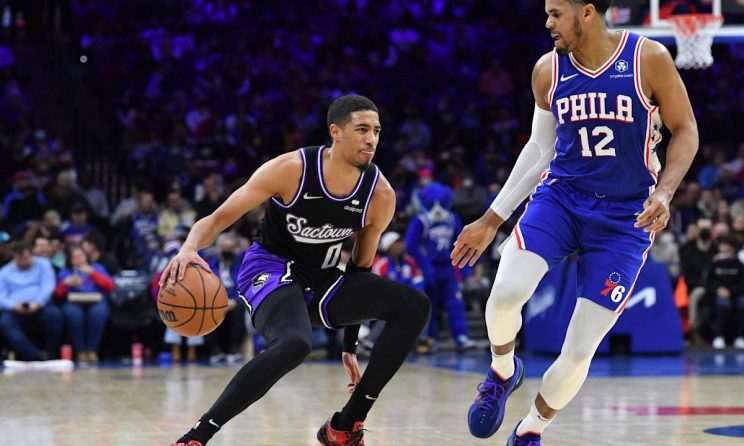 The Sacramento Kings needed a spark on Saturday as they saw their 17-point lead in the third quarter turn into a 10-point deficit in the fourth. The Philadelphia 76ers had begun to take control of the game as they used their talent and their veteran experience to do so.

The Kings turned to second-year guard Tyrese Haliburton to get the job done and the young man stepped up to the challenge. He had 14 points in the fourth quarter, including knocking down four triples, and he almost helped the Kings steal it before Philadelphia hung on for a 103-101 win.

Haliburton knocked down a tough fadeaway triple in the corner in front of Philadelphia’s bench that left Danny Green feeling impressed.

“Hoo!” said Green. “I think that describes enough of it right there. Sidestep, stepback, fadeaway 3 over the backboard in the corner, I thought that was for sure gonna come off hard. It didn’t touch anything, but the net and it showed what kind of night he had.”

Haliburton also shot 11-for-12 from the foul line as he was aggressive with getting into the paint and that was something that bothered Green for the most part.

All in all, Haliburton finished with a career-high 38 points and he had seven assists. It was a big performance for a young player.

“I’m never surprised by anyone,” said Rivers. “This is the NBA. Anybody can have a night on any night. You see it all the time. He made some tough shots. I thought early on, we didn’t guard him very well, but he’s a good player. He’s a terrific player.”