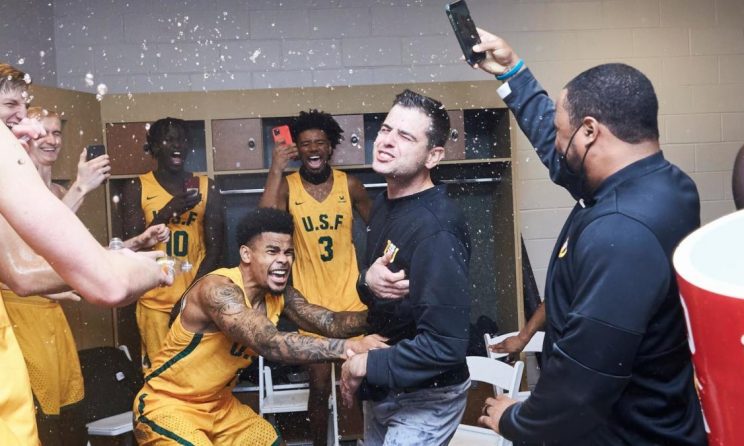 UNCASVILLE, Conn. — It took approximately 50 hours for college basketball to get its first seismic upset of the 2020-21 season.

It also took San Francisco, the program of Bill Russell, KC Jones and Bill Cartwright, almost 40 years to get a win over a top-five opponent as the unranked Dons defeated No. 4 Virginia 61-60 on Friday at Mohegan Sun Arena.

USF, which was two days removed from a shocking and decisive loss to UMass Lowell, drained 13 3-pointers to stun the Cavaliers, the reigning NCAA Tournament champions. The Dons escaped with a program-defining victory after USF forward Josh Kunen missed the front end of a one-and-one and then watched as UVA senior Sam Hauser — a career 44.5% 3-point shooter — missed a 3-pointer short at the horn.

Dons coach Todd Golden, a rising star in the industry, couldn’t help but break into a little dance outside the team locker room moments afterward. Golden and Virginia coach Tony Bennett crossed paths and traded pleasantries in the hallway afterward. Golden was humbly beaming in victory. Bennett knows that feeling well himself.

“We aspire to be like your program,” Golden said.

“You surpassed it today,” Bennett replied.

Golden told CBS Sports this is not just the biggest win of his nascent coaching career — it’s the biggest win he’s ever been a part of. The 35-year-old played at Saint Mary’s and was on Gaels teams that pulled big upsets of Gonzaga in the mid-2000s.

“This is my best win as a player or a coach,” Golden said. “Honestly, I’m more joyful with this because being the coach of a young group of guys that work really hard and get to experience that, it makes me feel really good.”

For the program, it’s historic. USF had not beaten a team ranked in the top five of the AP poll since Dec. 29, 1981, when it defeated No. 2 Wichita State. And Virginia had not lost to a West Coast Conference team in 15 years. It didn’t matter that no fans were in the building on Friday, in the controlled environment of “Bubbleville.” San Francisco was juiced — and celebrated accordingly in the locker room afterward. This was its third game in as many days but there were no tired legs. If anything, Virginia provided USF adrenaline, while the opposite was true of Bennett’s Cavs.

“We didn’t look like we were moving real hard and we looked a little lethargic at times,” Bennett said, later adding, “whenever you’d make a little error, they’d capitalize.”

The outcome’s all the more surprising considering Virginia’s historical dominance in November under Bennett. UVA entered the day 67-11 in November in Bennett’s tenure and was coming off a 15-of-29 shooting display from 3-point range in Wednesday’s blowout win over Towson. With sharpshooter Hauser and Rice transfer Trey Murphy in the fold, the first early return indicated the Wahoos would be typically elite on defense and undeniably upgraded on offense. That wasn’t the case on Friday.

USF pulled off an 8-0 run to go up 61-54 with 2:06 left. The Dons wouldn’t score again but it was barely enough to get by. If Hauser’s final shot falls, it’s a different story. The change in offense was significant for UVA. Bennett deployed a five-man motion offense vs. Towson — a style he’s seldom ever used with Virginia — and the team sank 15 triples. They tried some more of that again vs. USF but Golden’s team was well-prepared for it and held UVA to 3-of-12 shooting from deep.

The Dons made more 3-pointers (13) than Virginia attempted.

This game is a microcosm of the upside and downside to scheduling switching we’ll see around college hoops this season. After losing the original matchup vs. Florida, Bennett said he had no regret over taking the San Francisco game despite the loss.

“This is college basketball this year,” he said.

USF only agreed to play this game on a whim four days ago, when it was on its way to Connecticut but waiting on layover at Salina Regional Airport in Kansas. Almost 90 hours later, San Francisco claims the biggest win in four decades for a proud program with two national championships to its name. Golden admitted he took the Virginia game because he was confident enough in his team to think they’d be 2-0 after facing Lowell and Towson in back-to-back days. The UVA game was a house-money proposition (in a casino resort, no less). It didn’t work out that way, though. USF’s 76-68 loss to Lowell on Wednesday afternoon was a shock to the system.

“[Towson] was a stressful game for our program,” Golden said. “We’ve been working toward something for eight months and then you lose that game vs. UMass Lowell. As a coach, you start question, man, do we know what our team is? Do we know how good we could be?”

“I told them against Towson: that can be fool’s gold,” Bennett said. “You can fall in love with that, and shots will come and go, but when the shots aren’t there can you be sound enough offensively to take off the ball, to finish?”

Bennett said all the preseason rankings hype is now tossed away for his group. They should be steady going forward; the Cavaliers’ next four games are scheduled to be played at home. They now prep for a Saint Francis (Pa.) team that’s coming off a major upset itself; the Red Flash went into Pitt and stunned the Panthers on Wednesday night.

San Francisco is sticking around here in Connecticut and on the hunt for another W. It will try to improve to 3-1 on Sunday when it faces a talented and desperate 0-2 Rhode Island team that nearly upset Arizona State on Wednesday night.