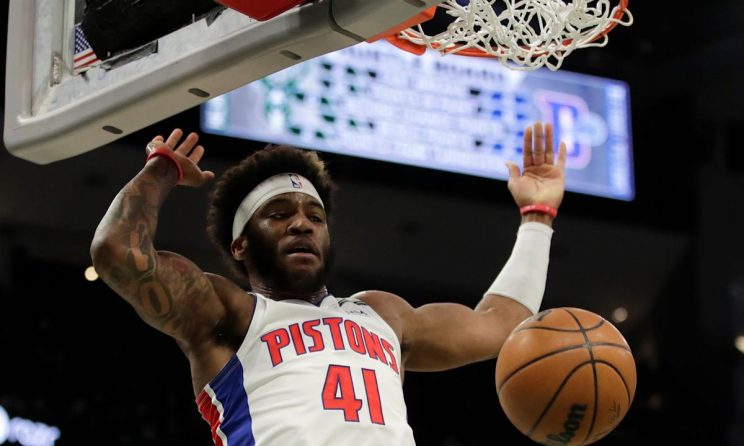 MILWAUKEE — Saddiq Bey delivered one of the best moments of his young career Saturday night, knocking down a game-winning 3-pointer in overtime to give a depleted Detroit Pistons team a win over the San Antonio Spurs — their second win since Nov. 17.

Flanked with a much healthier roster, Bey followed up with the best game of his career.

He scored a career-high 34 points, and knocked down a career-best eight 3-pointers, to help the Pistons pull off an upset 115-106 road win against the defending champion Milwaukee Bucks.

PISTONS MAILBAG: Where is the “restoring” headed, favorite fit for No. 1 pick in 2022 draft

The win came on the night the Pistons got back six players — Cade Cunningham, Killian Hayes, Trey Lyles, Josh Jackson, Saben Lee and Rodney McGruder — from health and safety protocols.

Detroit Pistons’ Saddiq Bey dunks during the first half of an NBA basketball game against the Milwaukee Bucks, Monday, Jan. 3, 2022, in Milwaukee.

It’s the first time the Pistons won back-to-back games since March 2021, and their first win against the Bucks since February 2018. Detroit had lost 16 straight against Milwaukee, including their 2019 first-round sweep.

Bey added eight rebounds and four assists. Jackson scored a season-high 24 points and knocked down five 3-pointers, and Cunningham added 19 points and seven assists. His dagger 3-pointer with 2:43 left in the fourth quarter to give the Pistons a 13-point lead, and grabbed his own missed layup and laid it back in with 27 seconds remaining.

The Bucks suffered a poor shooting night, hitting just 11 of their 46 3-point attempts (23.9%). Detroit, on the other hand, had one of its best shooting nights, making 18 of 43 (41.9%) to tie its season-high in makes. The Pistons also had their second-best passing night with 31 assists against 13 turnovers.

HOW DO YOU DO? Hamidou Diallo scoring surge has many wondering: ‘Who’s that masked man?’

Entering Monday, Bey had scored at least 20 points in seven of his last eight games. During that stretch, he averaged 23.9 points, 8.6 rebounds and 3.1 assists. In Jerami Grant’s absence, Bey has shaken off his sophomore slump and emerged as Detroit’s best scorer and all-around most versatile players.

Bey didn’t lose a step with most of Detroit’s rotation returning against Milwaukee. He missed his first four shots, but he didn’t miss many afterward. He found his touch in the first quarter by scoring 11 points in less than four minutes to give Detroit a 23-19 lead late in the period.

Bey set his career-high for made 3-pointers midway through the fourth quarter, knocking it down with 6:04 remaining to tie his career-high with 32 points and extend Detroit’s lead to 104-94. He scored his career-high 34th point late in the fourth, making a layup with 3:13 to play to make it a nine-point game.

Pistons guard Josh Jackson picks off a pass intended for Bucks forward Giannis Antetokounmpo in the fourth quarter of the Pistons’ 115-106 win on Monday, Jan. 3, 2022, in Milwaukee.

December was a rough month for Jackson. He was arguably Detroit’s best player during preseason, but saw his role steadily decline after a rough shooting stretch and Hamidou Diallo’s emergence. In six December games before he entered health and safety protocols, he averaged three points on 30.8% overall shooting in 14.4 minutes per game.

Jackson returned on Monday and delivered his best game of the season. He crossed the 20-point threshold for the first time this season, and tied his career-high with five made 3-pointers. The Bucks dared him to shoot all game, and he made them pay.

The Pistons need the version of Jackson that arrived at Fiserv Forum. He’s always had the ability to heat up offensively, but on a team that’s deepest at the wing position, he can’t afford many off nights. Monday was a reminder of what he can do when he’s feeling it.