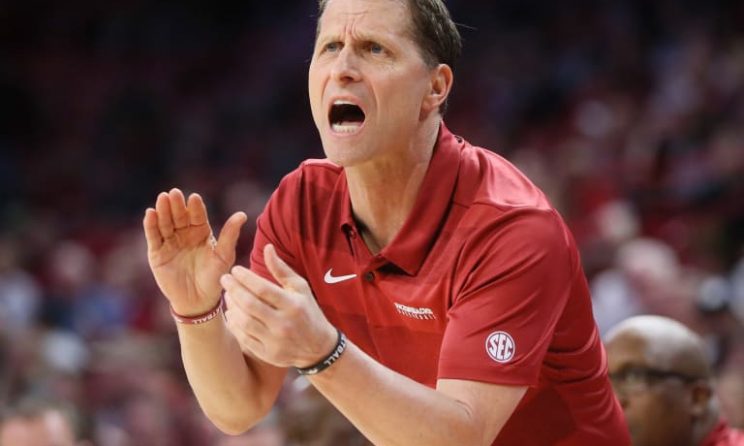 College Students, get a year of HawgBeat coverage for just $11.95. Request details via email from your school account (.edu) to [email protected]

FAYETTEVILLE — Arkansas will open the 2020-21 basketball season with home games against Mississippi Valley State and North Texas, according to CBS Sports’ Matt Norlander.

The Razorbacks will host the Delta Devils on Nov. 25, college basketball’s opening day, and then welcome the Mean Green to Fayetteville a few days later on Nov. 28 – the same day as the football team’s game at Missouri.

By playing two games in an MTE, Arkansas can have a full 27-game regular-season slate, which head coach Eric Musselman has said is his goal. That will include 18 SEC games, leaving nine slots for non-conference play – four of which have now been filled.

“The schedule is pretty much done,” Musselman said Friday. “Now it’s just a matter of getting contracts signed, but we’re right there at the finish line, in all seriousness.”

In addition to the Mississippi Valley State and North Texas games, the Razorbacks will also host in-state foe UCA on Dec. 12 and travel to Oklahoma State on Jan. 30 for the Big 12/SEC Challenge.

The remaining five non-conference opponents are unknown, but Arkansas previously had home games scheduled against Oral Roberts, Northern Illinois, UT-Arlington, Lipscomb, Abilene Christian and Old Dominion (in North Little Rock), as well as a road trip to Tulsa and a neutral-site matchup with Oklahoma in Tulsa. It was also set to play in the 2020 MGM Resorts Main Event in Las Vegas, with two games against Louisville, San Francisco or Colorado State.

That schedule was blown up thanks to modifications to the season in response to the ongoing coronavirus pandemic, which included pushing the start date back and reducing the number of games.

Despite the start of the season being just 3.5 weeks away, only 24 of 357 Division I men’s basketball teams have announced their amended non-conference schedule as of Friday, according to The D1 Docket. Texas A&M and Florida are the only SEC teams that have done so.

“It’s probably been the most difficult schedule in the country for anybody to do,” Musselman said. “A lot of twists, turns. A lot of, ‘Hey, yeah, we’re going to do a game,’ and then a conference changes something. So it’s been challenging.”