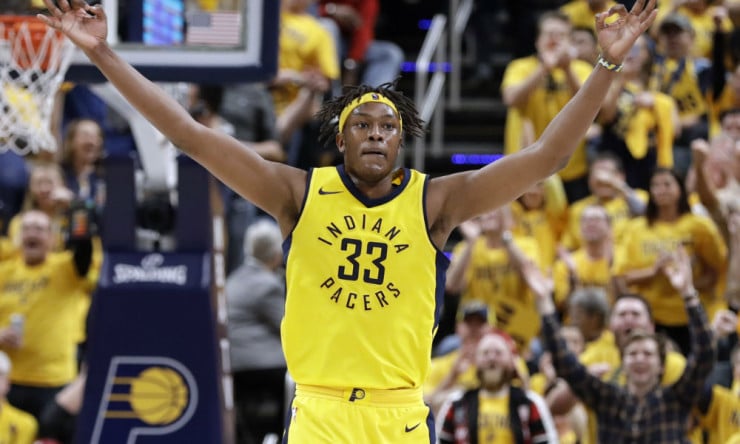 A Myles Turner trade has been a hot topic for the last couple of seasons now. With the NBA Trade Deadline inching closer and closer, it is starting to gain traction again. The Indiana Pacers made it clear at the beginning of this season they were ready to hit the reset button reportedly making both Turner and Domantas Sabonis available for the right trade.

The Pacers’ premier shot-blocker could benefit a number of teams. However, which teams would be the best fit for Myles Turner? Without further adieu, let’s take a look at the best possible Myles Turner trade destinations.

The Boston Celtics have been in dire need of a true big man for what seems like ages now. The team does like Robert Williams, however, if Turner is there for the right asking price, it would be hard to turn down. Adding a career 2.3 block per game post presence would certainly bolster Boston’s defense and in turn, would not hurt their potent offense much either. With the star duo of Jayson Tatum and Jaylen Brown leading the offensively, Turner would not be asked to concert too much effort offensively providing a much more balanced all-around attack for the Boston Celtics.

The Charlotte Hornets are another team that could get a massive upgrade at their center position with a Myles Turner trade. No disrespect to Mason Plumlee, but Turner would increase Charlotte’s rim protection tenfold. Not to mention, it would be interesting to see the pick and roll game between him and LaMelo Ball. The Hornets are a young team on the rise and adding someone like Turner would signal to the rest of the NBA that they mean business. It would also be another positive step in their rebuild process thus far.

A frontcourt consisting of Karl-Anthony Towns and Myles Turner does sound a bit weird at first. Especially since both players are centers. But, bear in mind for a moment the fact that a Myles Turner trade would make Minnesota’s frontcourt attack very balanced. KAT would still be the number one option offensively and Turner would provide valuable rim protection to help KAT with his defensive deficiencies. Turner would probably have to move to the power-forward spot, but that may not be as big of a deal as some would think. Also, do not forget that Turner is capable of stretching the floor as well as he can hit a three once in a while. He has shot 34.9 percent from beyond the arc for his career. Minnesota may seem like an odd fit, but it may be a fit that just works out perfectly.