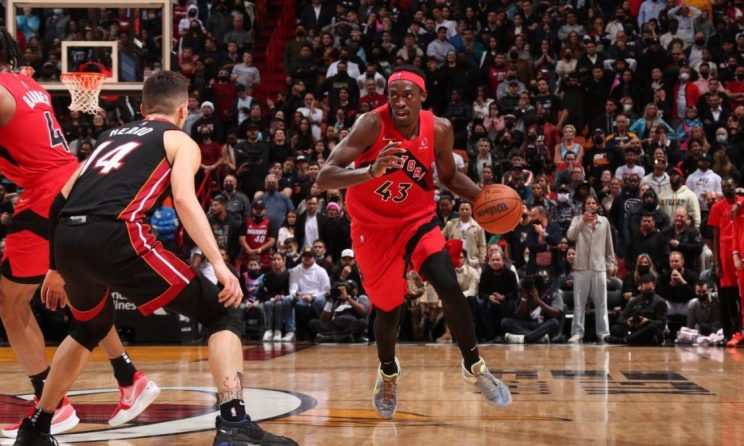 When Toronto Raptors head coach Nick Nurse made his final substitution of the night with 8:44 left in the fourth quarter — with Fred VanVleet checked in for Precious Achiuwa — Toronto was ahead of the Miami Heat 85-83. Nurse likely assumed that his starting rotation of VanVleet, Scottie Barnes, Pascal Siakam, OG Anunoby and Gary Trent Jr. could close out the game in regulation, where at one point they were up by 16 points on the No. 1-ranked team in the Eastern Conference.

Toronto did get the win, but it took over an hour and three overtimes for that to happen.

When the final buzzer sounded, all five Raptors starters had played well over 50 minutes in the triple-overtime thriller. For comparison, only Jimmy Butler on the Heat surpassed the 50-minute mark Saturday night. But when you go down Toronto’s boxscore, the minutes of each player reads like the runtime of an episode of Ozark on Netflix. Siakam finished with the most: 56 minutes and 31 seconds, which is the most minutes for a player in a regular season game since Paul Millsap (60 minutes) and Tim Hardaway Jr. (57 minutes) back in 2017.

Even crazier, that stat goes right down to the day, as Millsap and Hardaway Jr. logged those minutes with the Atlanta Hawks on Jan. 29, 2017 in a quadruple-overtime win over the New York Knicks. As for the rest of Toronto’s starters, each of Barnes, Anunoby and Trent Jr. totaled 56, 55 and 55 minutes, respectively, while VanVleet played over 53 minutes.

When asked after the game if he thought about making any substitutions to give his starters a rest, Nurse said he never considered it.

“You don’t expect it to keep going,” Nurse said. “They were connected, those five guys, and there was no need to sub anybody. Everybody was chipping in, everybody was playing well.”

That’s a fair assessment — don’t fix what isn’t broken. Toronto was playing tough defense in each overtime as Anunoby and Siakam came up with clutch defensive stops on multiple occasions. It could also be argued that it would’ve been a mistake for Nurse to sub anyone in, given Toronto’s lackluster bench play this season.

The Raptors’ bench ranks last in the league in scoring, averaging just 23.1 points a night. Their second unit also ranks last in minutes per game (13.8). In contrast to that, the Raptors’ starting five tops the league in minutes per night (34.6). In fact, when you look at which players are logging the most minutes a game this season, three Raptors starters — VanVleet, Siakam and Anunoby — claim the top three spots in the entire league, respectively.

Toronto appears to be figuring things out in terms of stringing wins together, and have climbed up to the No. 8 spot in the East, but the minutes the starters are logging isn’t sustainable. The Raptors desperately need depth, and their win over the Heat on Saturday night only highlighted that even further. Fortunately, Masai Ujiri and the rest of Toronto’s front office can address that issue with the NBA trade deadline just around the corner on Feb. 10. Because if the Raptors want to make a playoff push, they’ll need to bolster their bench so that the starters aren’t gassed out by the end of the season. Though Toronto outlasted a Miami team on the second night of a back-to-back, that may not always be the case when the Raptors are matched up against a team with far more depth.