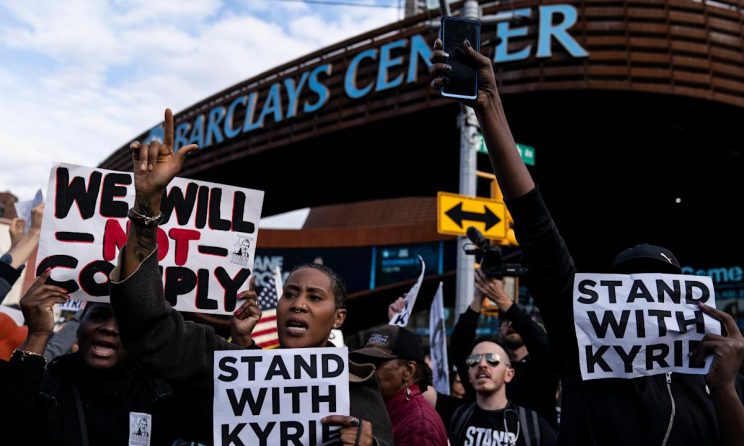 NEW YORK — Hours before tip-off inside Barclays Center on Monday, it was business as usual for Brooklyn Nets players and staff as they prepared for the second game of a season-long six-game homestand.

Fans and tourists alike mingled around the arena taking photos, COVID-19 test tents were set up nearby for anyone needing quick results and local law enforcement posted behind steel barriers at the ready in case trouble arose.

The Nets lost their home opener to the Charlotte Hornets on Sunday, but what happened before the game got more attention than anything happening on the court.

A group of protesters gathered outside of Barclays Center and tried to storm the entrance in support of Nets guard Kyrie Irving and his defiance on receiving the COVID-19 vaccine that nearly 97% of NBA players have received. Irving, who confirmed two weeks ago that he has not received the vaccine, will not suit up for the team until he does.

Protesters rally in support of Kyrie Irving outside Barclays Center.

“Barclays Center briefly closed its doors today in order to clear protestors from the main doors on the plaza and ensure guests could safely enter the arena,” a Barclays Center spokesperson said in a statement Sunday. “Only ticketed guests were able to enter the building and the game proceeded according to schedule.”

Those in attendance tried to force their way through the arena’s front door, while screaming “My body, my choice” and “Let Kyrie play.”

For the Nets, Irving is away from the team and his $33 million salary for the 2021-22 season is on standby. Irving said he wanted the public to respect his choice on vaccinations and has not made any public statement since then.

NBA PREDICTIONS: Can the Nets win the championship without Kyrie?

75TH ANNIVERSARY TEAM: Who made it, who didn’t, who should have?

“I am going to just continue to stay in shape, be ready to play, be ready to rock out with my teammates and just be part of this whole thing,” he said on Instagram live. “This is not a political thing, this is not about the NBA, not about any organization. This is about my life and what I am choosing to do.”

On Monday, 90 minutes before tip-off, there wasn’t a hint of any protests, as earlier in the day thousands of protesters walked across the Brooklyn Bridge. Maybe they made their point the day before while clashing with law enforcement, or maybe they stayed away because of the impending storm that was expected to dump inches of rain on the city.

The protesters that several NYPD uniformed officers told USA TODAY Sports that were expected never came, but instead made their way to City Hall earlier in the day to oppose New York’s vaccination mandate which states that any city worker that wants to continue working must show proof of vaccination by Friday at 5 p.m. If they don’t, those workers will join Irving and be sent away without receiving a paycheck.

But for Brooklyn’s opponent on Monday, it brought up another interesting scenario.

Wizards guard Bradley Beal, who was second in the NBA in scoring last season and missed the Tokyo Olympics after being placed in health and safety protocols, isn’t fully vaccinated either.

“Funny that (vaccines) only reduce your chances of going to the hospital.” Beal said last month, proclaiming his reasons for not getting the vaccine “personal.”

But the vaccine mandates that have been put in place in Los Angeles, San Francisco and New York only apply to the athletes on the five teams who make those cities home, so it allowed Beal to suit up against Brooklyn.