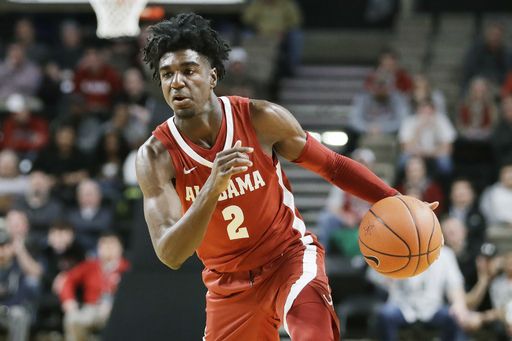 NEW ORLEANS (AP) — Stan Van Gundy said he didn’t have anything to do with the selection of New Orleans’ pick in the first round of Wednesday night’s NBA draft, but the Pelicans new coach can see Alabama guard Kira Lewis Jr. eventually playing alongside Lonzo Ball.

Van Gundy, hired just last month, said he trusted Pelicans’ basketball operations chief David Griffin and general manager Trajan Langdon to make the pick while he was focused on quickly assembling his staff with the pandemic-altered 2020-21 regular season slated to start in a month.

Langdon said that while he’s sure Lewis will compete for playing time right away, the Pelicans are banking more on the prospect’s upside in the years to come and aren’t sure how much he’ll play as a rookie.

Lewis is a combo guard, much like Jrue Holiday, who is expected to be traded to Milwaukee in an agreed-upon multi-team deal that has yet to become official.

While Ball is New Orleans’ incumbent starting point guard, Van Gundy sees potential for Lewis to play both guard spots. The coach intends for the Pelicans to play with pace and likes Lewis’ ”speed and quickness, both in transition to push the ball and to get in the paint and make plays.”

”One of the trends we’re seeing for teams, which I think is good one, is to try to get multiple playmakers on the floor,” Van Gundy said. ”There’s going to be a lot of times where we’re playing on the floor with two guys that you would probably classify as point guards, but you can play them together.”

Lewis is looking forward to the possiblities.

”I look forward to playing with Zion, him getting out in transition, looking for lobs, the athlete he is, how explosive he is,” Lewis said. ”We’re going to feed off the excitement.”

Lewis averaged 18.5 points, 5.2 assists and 1.8 steals per game as a sophomore last season, highlighted by his career-high 37 points against Georgia. He shot 44.7% and was an All-SEC first team selection. He also made 56 3-pointers last season, shooting 36.6% from that range.

”Learned a lot from him – leadership, passes, different pick-and-roll reads,” Lewis said. ”He taught me a lot.”

Johnson told The Associated Press that Lewis is ”a very special kid” with ”gifted speed and acceleration.”

”He’s a highly skilled shooter who is very smart and can play on or off the ball,” Johnson added.

Lewis counts speed among his chief assets and said he ”can do pretty much a little bit of everything, whether it’s shoot, pass, dribble, defend a little bit. … I feel like I’m kind of, overall, better than any guard in the draft.”

As part of the Holiday trade to Milwaukee, the Pelicans were slated to receive the No. 24 pick from the Bucks, but then shipped that choice – RJ Hampton – to Denver for a future protected first round pick.

New Orleans concluded the draft by selecting Utah State shooting guard Sam Merrill with the final pick, 60th overall, in the second round – although that choice was slated to go to Milwaukee as part of the Holiday deal.