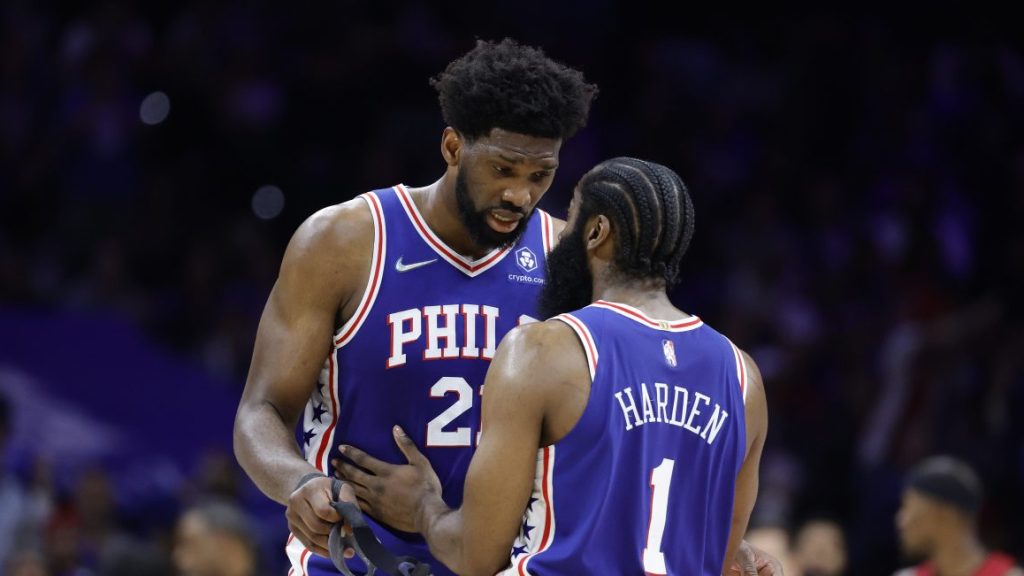 For the second consecutive year, the Philadelphia 76ers got eliminated in the second round of the playoffs.

Philadelphia lost to the Miami Heat in the Eastern Conference semifinals in six games, with James Harden arguably playing one of the worst playoff series of his career.

Last night, Harden only attempted nine shots in an elimination game, finishing with 11 points. And as you would expect, Twitter had a field day with ‘The Beard’ and the 76ers’ elimination.

James Harden, in a close out game you can’t have a performance like that; only take two shots and score no points in the second half?

The Philadelphia 76ers have been to the Conference Finals one (1) time since Dr. J retired.

James Harden is 32 going on 42. Even worse, he just doesn’t CARE. He’s made tons of $$$ and knows somebody will pay him tons more. He’s got his MVP. He’s Top 75. Championships never were his thing. Hides under playoff pressure. Supremely skilled nightmare.

Joel Embiid on James Harden: “Obviously, I’m sure since we got him, everybody expected the Houston James Harden, but that’s not who he is anymore. He’s more of a playmaker. I thought, at times, as with all of us, could’ve been more aggressive.” pic.twitter.com/DGf7cXqfoH

James Harden typically no-showed in the second half of this closeout game. Now he’s mostly just another Jim Harden. Ben Simmons eventually will make this trade look so phoolish for Philly.

In 30 years people will look at James Harden’s stats and wonder why he’s not ranked higher all-time, but the people who watched him will know why.

got simmons off the roster just for harden not to shoot with the season on the line. i gotta admit that’s pretty funny.

Embiid after Harden’s debut: “That was probably the most wide-open I’ve ever been in my career.”

Embiid tonight: “Everybody expected the Houston James Harden. But that’s not who he is anymore.”

Y’all were comparing Harden and Embiid to Shaq and Kobe 😭😭😭

James Harden fell off so bad after the NBA rule changes.

What team will James Harden want to be traded to next?

So who still thinks Harden joining Embiid was a good idea?

Don’t ever, EVER put James Harden and Dwyane Wade in the same fucking sentence again.

Ben Simmons and James Harden attempting the same number of second half shots in Philly’s last two elimination games was the only way this could have ended.

James Harden has 0 points in his last two 4th quarters.

Ben Simmons had 3 points in his last two 4th quarters with the Sixers. pic.twitter.com/HrUNtzLowQ

I hope Doc do get fired!!! He need to be in LA with that Lakers at least he knows the Point/Foward Lebron James is going to be in shape and actually compete. Get him AWAY from Harden please. Carry the hell on…

It’s now been 10 years since Doc Rivers made it out of the 2nd round.

If Harden get paid more than 200 dollars next year I’d be surprised ! 9 shots in a playoff elimination game ? That’s not even trying ! 🤦🏾‍♂️ wow

What could have been…

Big summer ahead for the Sixers. I’d be shocked if Doc is back. What’s Harden’s future following this embarrassment? Will Harris be flipped? Can they add shooting with few assets? Does Maxey take another leap? Embiid is 28 and in his prime. Morey must operate with urgency.

Sixers fans therapy session.
Let it all out.
This is a safe place.

This is the first time in James Harden’s career that he played 40+ minutes in any game and did not attempt a free throw. @ESPNStatsInfo

When asked about his contract option, James Harden says he will be back in Philadelphia, and he will do whatever it takes to allow this team to compete at the highest level moving forward.

if you already have an account. Typed comments will be lost if you are not signed in.