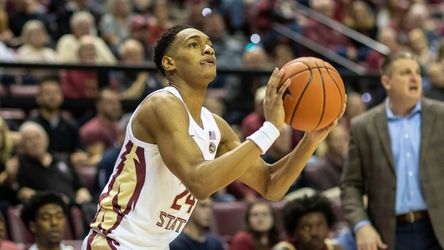 Devin Vassell is regarded as Top 10 talent in this year’s NBA Draft class. There has been much intrigue for the Florida State guard, with the Knicks being among teams. Even the Golden State Warriors, who own the No. 2 overall choice in the Draft, have worked him out.

Vassell confirmed that the Knicks also watched him work out, and he had a good conversation with new head coach Tom Thibodeau.

“Coach Thibodeau was definitely at the workout and I talked to him,” Vassell told reporters on Thursday. “He’s a great coach and we talked about defense, we talked about kinda what their team is looking for and I feel like I can help that team and fill that void. I think everything went extremely well with the Knicks and coach and it would be a blessing to be a part of that team.”

Scoring 12.7 point per game with a 42 percent stroke from beyond the arc is something the Knicks are looking for in a prospective point guard. Vassell is also 6-foot-6 with the ability to defend bigger players than the position normally has.

The Kentucky standout is another point guard that could interest the Knicks. Maxey mentioned that he hasn’t had a workout with either the Knicks or Nets. Only the New Orleans Pelicans have looked at him in-person.

But Maxey did have a good quote about Kenny Payne, the new Knicks assistant coach that comes from the Wildcats program under John Calipari.

“I was ecstatic when I found out that coach Kenny Payne was going to make that jump and going to the next level because he deserves it,” Maxey said. “He created a connection with all the guys that came through Kentucky by the time that he’s been there. He tells everybody the truth, he doesn’t sugarcoat anything and he’s always gonna help you work extremely hard and reach the goals that you set for yourself.”

The Knicks focused on getting the right coaches along with Thibodeau to help develop the young assets the team possesses, so that’s a good seal of approval from someone who has been coached by Payne already.