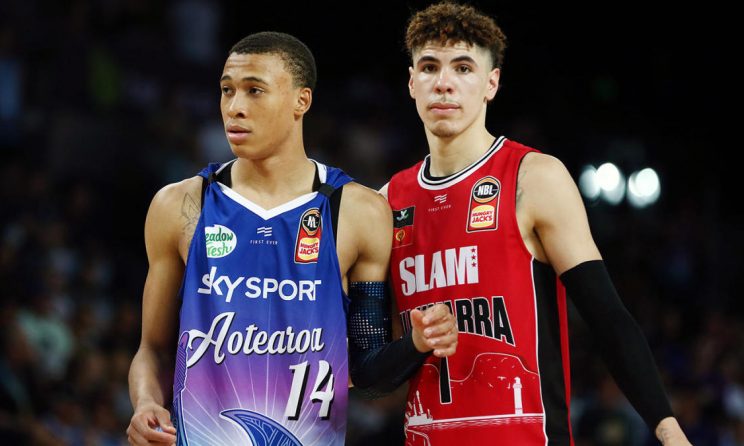 The word “bust” is harsh, and it’s incredibly overused. Andrew Wiggins, for example, has probably fallen short of expectations after being the top overall selection in 2014, but the guy has averaged 22 points, five rebounds and four assists in his six NBA seasons. Anthony Bennett, another Cleveland Cavaliers No. 1 overall pick, is probably the most generally accepted version of a bust, averaging 4.4 points and 3.1 rebounds in just 151 NBA games before continuing his career overseas and in the G League.

So when we look at “boom or bust” potential in the 2020 NBA Draft, we have to remember that everything is relative. If the No. 28 pick is out of the league in a few years, most people probably won’t remember. But if the same thing happens to a top-five pick, he’ll probably be labeled a bust. Drafting is difficult enough as it is, but consider the odd scouting process of 2020, where teams haven’t gotten their usual look at college and international prospects due to COVID-19, and we could have some big mistakes at the top of the draft — and possibly some franchise-changing picks further down.

With that in mind, here’s a look at five players from the 2020 NBA Draft class who have tremendously high ceilings, but conversely terrifying floors.

Boom: The upside is obvious, and that’s why Ball is the top player on most experts’ draft board. He’s a 6-foot-7 point guard with elite court vision and passing skills, who has already performed at the professional level in Australia. His confidence is through the roof, and if he can tweak the shooting form just a bit to become more consistent, he could be a franchise-changing talent.

Bust: Nobody is saying that Ball will be out of the league in three years — that’s not what we mean by “bust” in his case. But in order to reach what people expect from a top-three pick, he’s going to need to put some questions to rest. First and foremost is his shot. It’s almost impossible to be an All-Star level NBA point guard if you can’t consistently make 3-pointers, particularly off the dribble. Defenses will dare him to shoot by going under screens, and we need look no further than his brother Lonzo to see how a top draft pick’s expectations can turn south, despite clear talent, if the shot doesn’t develop quickly. He also lacks physicality that could lead to trouble at the next level, especially since he’s not an elite athlete. Ball could be the best player in the draft, as some expect, but he could also end up a disappointment if his flaws end up outweighing his strengths.

Want more analysis of the top prospects in the NBA Draft? Listen below and subscribe to the Eye on College Basketball podcast where we take a deep dive on the top players heading to the next level.

Boom: Okoro is an NBA-ready lock-down perimeter defender, which every single team in the NBA could make use of immediately. You never have to worry about his effort and he has good finishing ability around the rim, but it’s hard to figure out where Okoro fits offensively in the NBA. If he can become a reliable 3-point shooter, he has an All-Star ceiling, and his work ethic suggests that’s absolutely a possibility.

Bust: Again, the term “bust” is relative. Okoro will have a long NBA career with his defense and athleticism. But if he can’t improve his shot (29% on 3-pointers, 67% on free throws at Auburn), his ceiling falls from an All-Star to a one-dimensional defensive player in the mold of Thabo Sefolosha or Tony Allen. There’s absolutely nothing wrong with that, but if he gets drafted in the top five and winds up as a journeyman defensive stud, most will end up viewing him as a bust.

Boom: A 6-5 point guard who won’t turn 20 until July, it’s easy to see why Hayes is listed as a mid-to-late lottery pick on most big boards. He has a preternatural knack for operating the pick-and-roll, which makes him a perfect fit for modern, spread offenses with shooting all over the court. The issue with Hayes, for now at least, is his shot. If he can continue to improve and become a knock-down shooter, he could end up being the best point guard in the 2020 draft.

Bust: The biggest questions for Hayes are his shot and his lack of physicality. An international coach who played against Hayes this year said that he was absolutely dominated by his bigger, stronger guards. Like most lefties, he struggles going right, but this coach said “it’s crazy” how poor Hayes is with his right hand, which has led him to question the young point guard’s ability to survive in the NBA.

“I think he’ll have a good career, that’s my bet,” the coach told CBS Sports. “But he could also be a guy who plays two years and ends up back in Europe.”

That sounds like the very definition of “boom or bust.”

Boom: You don’t often find 7-footers with the type of guard skills that Pokusevski possesses. He can handle the ball both in transition and in the halfcourt and has excellent court vision and passing skills. Ultimately his extreme ceiling is a more mobile version of Nikola Jokic, which would make him one of the best players in the NBA if it all comes together perfectly.

Bust: First, we have yet to see Pokusevski against anything close to NBA competition. Second, the kid is a toothpick. It remains to be seen whether he’ll mature physically enough to be able to maintain his style of play against NBA defenders. At just 18 years old, the talent is clearly there and he’s an excellent draft-and-stash candidate, but there’s absolutely a world in which Pokusevski never fully develops and remains overseas for his entire career.

Boom: An intriguing prospect with size, skill and athleticism, Hampton played in the Australian NBL with Ball but didn’t experience near the same success. Recently, however, Hampton has been climbing up draft boards due to improved shot mechanics that he’s displayed during workouts.

Hampton has all the tools to be an elite scorer, and if his shot improvement is real, he could wind up being the steal of the draft.

Bust: If we’ve learned one thing about draft prospects over the years, it’s to be wary of social media videos. Hampton was rated in the late teens or 20s on most big boards prior to his perceived shot improvement, so maybe that’s where he should stay. His stint in Australia was less than encouraging, and there are still questions about whether he’ll be able to defend or make plays at the NBA level. Ultimately he could end up as a bucket-getter off the bench — and if he can’t shoot, then he might not even be that.