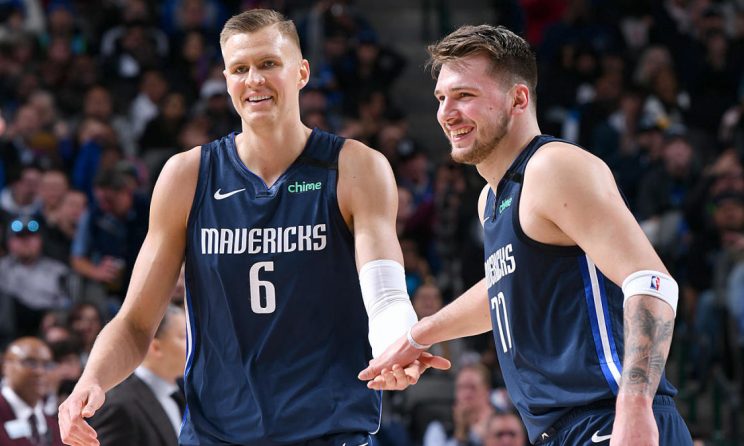 The Dallas Mavericks are widely expected to be among the major players in 2021’s star-studded free-agent class, which includes two-time MVP Giannis Antetokounmpo. With Luka Doncic and Kristaps Porzingis in place, the future is incredibly bright in Dallas, but according to Brad Townsend of The Dallas Morning News, that doesn’t mean they aren’t trying to win right now.

Townsend reports that the Mavericks are willing to give up anybody on their roster aside from Doncic and Porzingis to get a third star to play alongside them, and are even open to taking on long-term salary to do so. While a win-now move seems to be the priority, Townsend added that Dallas, which currently owns the No. 18 and No. 31 overall picks, is also interested in trading into the lottery, presumably for a higher-upside prospect.

A higher draft pick should be somewhat attainable. This draft is not viewed as particularly top-heavy, but it has depth. That makes the higher pick they’d like to acquire less valuable than it would be a in a normal draft, but their own picks more valuable. If necessary, they have tradeable first-round picks in 2025 and 2027 to include as well.

The notion of adding a third star isn’t quite as simple. If the entire goal is to win the 2021 championship, Dallas could probably trade for Chris Paul pretty easily. The problem with doing so is that his contract would prevent them from chasing Giannis in 2021, and at 35 years old, he doesn’t figure to be around for the primes of the two other Maverick stars. He is an extreme case, but other possible star acquisitions fit a similar mold.

Jrue Holiday is going to be a popular name here. He is 30, has a lengthy injury history and has a player option for the 2021-22 season. He is a perfect fit for a Dallas roster that prizes ball-handling and sorely needs a defensive upgrade, but would the Mavericks really risk their shot at Giannis for, at best, a low-level All-Star? They’d probably prefer someone like Bradley Beal, but no stars of that caliber are realistically available, and even if they were, the Mavericks wouldn’t have enough to trade for that kind of player.

Townsend’s report indicates that the Mavericks are willing to take on long-term salary, but does not specify how much of it. Adding a bit is one thing. Using picks and the stretch provision, there are always ways to clear a bit of extra space. But the Mavericks would probably prefer not to to take themselves out of the Giannis derby altogether. In that sense, it might be worth looking into high-level expiring contracts. Players like Gordon Hayward, DeMar DeRozan and LaMarcus Aldridge fit the bill, and should be attainable for Dallas, but none improve their defense. Kyle Lowry and Victor Oladipo would, but might be out of Dallas’ price range from an asset perspective.

The Mavericks are likely canvassing the league right now looking for any possible upgrades. These players will surely be names on their radar. But Dallas has a number of competing agendas to juggle. There is quite a bit of evidence to suggest that, despite their No. 7 seed, the Mavericks were among the best teams in the Western Conference last season. They had the third-best net rating in the West last season, but saw their record depressed by poor clutch numbers. Those tend to be somewhat random, and should improve next season. By that line of the thinking, the Mavericks could enter the championship conversation right away.

But they also have max cap space in one of the best free-agent classes of all time, and Doncic is only 21. They have a chance to contend for over a decade merely by having him on their roster, and if they win the Giannis sweepstakes, they would likely have a window of at least three years as the unquestioned championship favorite. That is not something to be thrown aside lightly. In a perfect world, Dallas would find upgrades without punting away its 2021 cap space. But Townsend’s report suggests that if the Mavericks have to make a choice, the priority is competing right away.